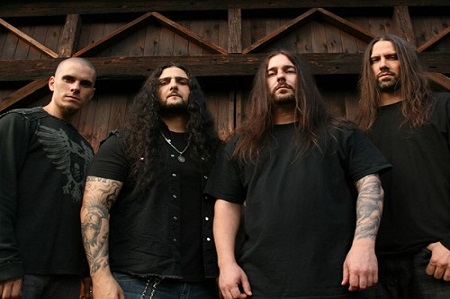 Intrinsic to one of the key terms thrown around when discussing Canada’s Kataklysm: “The hyperblast,” drummer Max Duhamel was forced to take an indefinite leave of absence from the band this spring. The band’s daunting tour schedule – doubled-up thanks to their “other” band Ex Deo – was one of the primary contributors to Duhamel’s alcohol problems, so rather than trying to wade through another grueling album/tour cycle, the drummer wisely decided to step aside and get his act together. If only more metal dudes (and musicians in general) would do such a thing…

Not to be deterred, Kataklsym regrouped with former Neuraxis drummer Oli Beaudoin and their 11th full-length Waiting For the End to Come (Nuclear Blast) was completed. This is not the first time the band recorded an album without Duhamel (2004’s Serenity in Fire saw maniacal blaster Martin Maurais sit in for a second), but Kataklysm weren’t at the level they are now, which is undisputed Canadian death metal champs level. It shows on Waiting For the End to Come, with the band doling out vicious slabs of song-oriented death metal, laced with blast charges and streams of melody, all done the Kataklysm way.

Phoning from his Montreal-based studio where he splits time as a producer/engineer, guitarist Jean-Francois Dagenais was all too kind to discuss Duhamel’s temporary leave of absence, the new album, and impending tour schedule, one that should see the band traverse the globe many times over. Here’s how it went…

Dead Rhetoric: We’ll get to the new album in a second, but first, how is Max doing? Are you in contact with him at all?

Jean-Francois Dagenais: I gotta be honest – I haven’t talked to him in about three or four months. I’m hoping he’s alright. I last heard he was doing great and relocated himself with some of his friends and going through this rehab process, but I haven’t talked to him in a while. I’m hoping he’s alright. I’ve sent him a few emails and haven’t gotten any replies.

Dead Rhetoric: Did you see his leave of absence coming?

Dagenais: Yeah, we knew for a while. It was obvious something needed to happen. Whenever somebody you know is feeling bad or having a rough patch, you have to give them time to get better. As time was passing by for the last year or year and-a-half, and we didn’t see any improvement…that’s why we had the talk for all the tours we were having for the last record. We sat down and had a meeting and said “We can’t keep going like this anymore.” And he agreed and said he needed to take some responsibility and get his shit together and take a break. I think that’s what he’s doing right now, but I don’t like not hearing from him. But knowing him for all of these years, it’s a positive thing and I’m pretty sure he’s doing okay and working hard.

Dead Rhetoric: How much of an effect did his issues have on shows? He’s got quite a tough job in the band.

Dagenais: That was the other thing: It’s not something where you can have a night off. You have to be on top of your game physically as well as mentally. You have to be on the ball. The last couple of tours we’ve done, you could definitely tell there were some mistakes or little problems going on, and the tightness as well. The energy behind the kit – you can feel these things when you play live. After a while, it’s easy for a band that tours a lot like us to become more on the automatic side of things where you play, but you’ve done so many shows that everything becomes a routine in a way. You also feel it when something goes wrong and you can tell Max was having issues.

And we were worried to drag him into another album and record cycle…I don’t that would have helped to keep him in the band for another year. There’s so much intense work, and when we tour, there’s so much alcohol on our rider. It’s free, you have people coming up to us and buying us shots at the bar, and it’s hard to turn down, especially for Max. He likes to party and the company of people, and for him, I don’t think it was the best scenario to stay with us. We actually think it will be good for him, and for us. I’m hoping he gets his stuff together this year and we can start playing together in the next year or so, but I have no idea what’s going on with him.

Dead Rhetoric: Is there an open door policy with him coming back?

Dagenais: Yeah, of course. Max is a brother to us. We started this band together and have been going for all of these years. We just want him to be sharp and ready and be the Max of old behind the kit. We’re hoping that happens sooner than later.

Dead Rhetoric: You did Serenity in Fire without him ten years ago, but it was weirder this time not having him around?

Dagenais: Yeah, because Max brings good ideas to the table, but he also brings a good sense of humor. His presence, he makes everybody happy when he’s around, and it was weird him not being around, especially for when we were joking around and stuff. Now we have this guy, Oli, that was kind of good in a sense that he brought new ideas to the table and new thing with a different type of drumming, and a different attitude when it came to song structures. It also gave this album a different dimension drumming-wise. I really like what we did and we like playing with him. We’re starting to bond now because we’ve only known each other for a few months, but now it’s starting to connect musically and personally. I don’t think we could have gotten a better replacement than Oli for this touring cycle.

Dead Rhetoric: I like his drumming on the new album. He’s not trying to copy Max, but at the same time, you can tell he stuck to some of the core ideals of Kataklysm drumming.

Dagenais: Oli can play whatever he wants. He is the type of drummer that knows so many styles, but was also a Kataklysm fan coming into the recordings – he knows our style, he knows what works with this band and how it should [sound]. At the same time, he brought fresh ideas to plant into our sound. That’s what we wanted him to do: Respect what Kataklysm has done, but bring his personality into the mix.