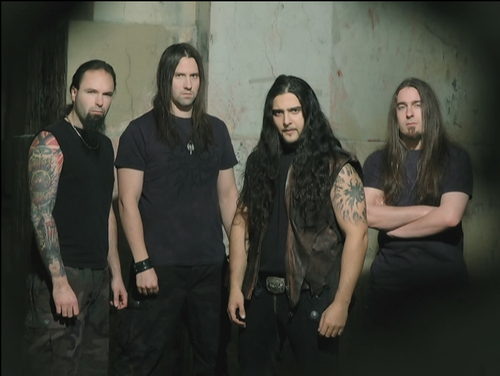 Quite the winding road for Kataklysm, eh? [We had to throw “eh” in there, because Blistering is really a Canadian-based publication, but we’re based in the U.S.]. Had they not have undergone the massive stylistic overhaul with 2000’s The Prophecy (Stigmata of the Immaculate), who knows where they would have ended up…probably with the rest of their Canadian death metal contemporaries – in the obscurity bin.

If The Prophecy righted the Kataklysm ship, it was albums like 2001’s Epic: The Poetry of War and 2002’s Shadows and Dust that breathed life into the term “song-oriented death metal.” And that’s where the band has resided since. No band in the death metal arena is bound to straight songwriting conventions like Kataklysm, but when combined with the band’s trademark “Northern Hyperblast” and streamlined riffs and melodies, it’s an awfully hard combination to fuck with.

The band returns this year with Heaven’s Venom, another slab of straightforward, yet monstrously brutal death metal. We caught up with guitarist/producer Jean-Francois Dagenais to wax on the new album, their stint on Ozzfest (this interview was conducted while the band was still on the festival), and how divorce made Heaven’s Venom the exact type of album the band needed to reach another new plateau…

Blistering.com: You’ve done the European festival circuit for years, but Ozzfest is your first “big” U.S. touring festival. What’s the reaction been like thus far?

Jean-Francois Dagenais: It’s been crazy. For me, it reminds of the European festivals with the set-up and how things are, but it’s the first chance for us to play something like this over in America, so for us, it has been great. It’s been like a fun experience and we’d love to do it again, for sure.

Blistering.com: It’s always a great way to set up the new album.

Dagenais: Playing the new songs live has been great. It feels fresh. We’ve been playing the same songs for a while, so to have new stuff, we’re all excited.

Blistering.com: In terms of North America, you’ve been slowly building the band, but now are finally seeing the results, wouldn’t you say?

Dagenais: We’ve been very persistent for so long. We enjoy our music and we enjoy what we do, so a lot of people tell me how we’ve struggled, but I don’t know if I feel like that. Touring is fun and every year we get stronger and better and the fanbase we’ve managed to bring over here…it’s getting bigger.

Blistering.com: Even going back to when the band was re-energized withStigmata of the Immaculate, were you already laying the groundwork to get to this point?

Dagenais: We were already striving for that when we started. It was about writing interesting music and seeing where we could go. Over the years, we took it more seriously, but no, we had no idea since we started doing this right out of high school. We had expectations to do this because of our sheer passion. For me, just being able to tour, like doing the Ozzfest tour in the U.S., sharing the bill with awesome bands…I didn’t think we’d get this far.

Blistering.com: As for Heaven’s Venom, since you have such a big role in the creation of the album from the writing of it to putting it to tape, what were you aiming for sonically this time out?

Dagenais: I think we came into this album determined, all of us. The writing process was both slow and fast, but I think that it had to do with the guys in the band. Three of us went through a separation and divorce. Basically, it motivated us to do something good. Everyone was focused…I tried to capture that the best as I could on the CD. The one thing that a lot of people told me when they heard the record is that they feel the anger and the passion, and I think it’s what I wanted to capture the most. Everybody was really focused and determined on this one.

Blistering.com: The brutality aspect of this one is one of the first things I picked up on.

Dagenais: Everyone was determined to do this in that manner. All of the songs, it was kind of a statement that, “We’re still here. We’re harder than ever.” [laughs]

Blistering.com: Something like “Faith Made of Shrapnel” instantly comes to mind. The down-picking is way intense.

Dagenais: We just want to make music that rocks. We’re definitely not a super technical band; we want to be harder and heavy, yet understandable. Like one of my favorite bands is AC/DC. I love the simplicity and the way how effective their songs are. We want to project something like that with Kataklysm, but in a metal way. We want it to be in your face, crunchy and aggressive, but the arrangements and songs are more than just there for showing off how good we are at our instruments. We also wanted to achieve on this album how well it would sound live.