As the summer continues its assault on air conditioners and the complexion of beach-goers across the globe, the influx of albums to check out and consume has yet to let up as well. With the daunting but exciting fall release schedule on the horizon, here’s the next round of Rapid Fires, this time featuring Celestial Grave, Cloak, Death Courier, Gilded Lily, Gorgosaur, Guttural Corposa Cavernosa, J.T. Ripper, Karmakanic, Lightless Moor, Perturbator, Rezet, Seedna, The Embodied, Tombstalker (pictured), and Valient Thorr 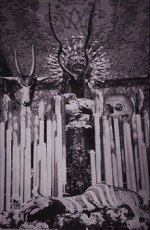 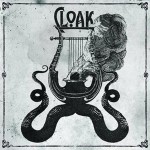 Cloak – Cloak (Boris Records)
Atlanta, Georgia’s Cloak combine dark death/black textures against heavy rock on this self-titled 7”. Between guitarist Scott Taysom’s hellish screams and bellows plus the evil twin rhythms he and fellow axe man Max Brigham unfurl, these two cuts shake, rattle and roll as if Dissection and Deep Purple aligned in unity. “In the Darkness, the Path” has killer trills during the verses, plus a doomy last third that features drummer Sean Bruneau’s tribal groove skills, while “The Hunger” penetrates skulls through harsh, caustic screams and equally jarring/catchy riffing. Three years under their belts and we’re ready for a full-length record, gentlemen. – Matt Coe (Cloak on Facebook) 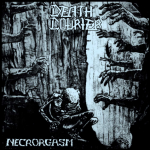 Death Courier – EP and Demo LP (Nuclear War Now! Productions)
Don’t be misled by the title—this is a reissue of Death Courier’s various late ‘80s and early ‘90’s demos and EPs that resulted in the release of their first proper album, 1992’s Demise. The band itself was fundamentally rooted in Greece’s underrated extreme metal scene, with Death Courier emerging as the death metal response to the black metal might of Rotting Christ, Septic Flesh, and others. Not surprisingly, the songs here are emblematic of the times, with raw, blazing numbers working in the crosshairs of simplicity and extremity. There is, of course, a tremendous charm to all of this, and will no doubt reel in the collectors. – David E. Gehlke (Death Courier Facebook) 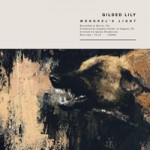 Gilded Lily – Mongrel’s Light (Lion’s Jawbone)
Proof that “post-black” metal can still bear it’s fangs (much like the album art itself), Gilded Lily take elements of black metal and combine them with grind and hardcore to produce an album that is as elegant as it is ferocious. There’s some really caustic tracks, such as the relentless “Yellow Dog’s Song” (which does even lay down a few moments of groove), but there’s also some moments of stirring gloominess, such as “A Sparse Room” and “The City Ends,” adding some heightened depth and more exploratory feelings. It may seem an odd package, but it comes together quite nicely – no reason you can’t sound pissed about being depressed. Gilded Lily packs some serious firepower and pays attention to both sides of their approach. – Kyle McGinn (Giled Lily on Facebook) 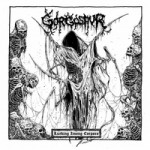 Gorgosaur – Lurking Among Corpses (Memento Mori)
Always fun to have a metal act named after a dinosaur (remember Deinonychus?), and in some way the name makes sense as the form of death that Gorgosaur is conjuring is that of the ancient….Swedish death metal. You can guess the rest of the description from here – the usual suspects certainly key in the band’s sound, as do the tempos and ever-so slight melodies to bring those in. The only real distinguishing factor is that many of the vocals aren’t of the usual Swedish timbre but a drier, raspier tone. Other than that, Lurking Among Corpses checks off just about every box that you’d like it to. Ranking low in the originality factor is to be expected, but in terms of the actual songwriting and keeping things together, there’s a lot worse you could do than what Gorgosaur provides here. – Kyle McGinn (Gorgosaur on Facebook) 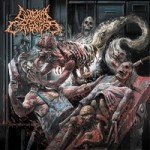 Guttural Corposa Cavernosa – You Should Have Died When I Killed You (Gorehouse Productions)
When one wants to hear the most cutting edge and brutal of slam, you can generally turn to Asia to find the harshest of the harsh (specifically Taiwan and the Philippines). Taiwanese act Guttural Corposa Cavernosa are one such act, though with this type of death metal, one has to urge that you aren’t going to find any out-of-the-box stylings. Straight-ahead brutal death slam is what you are in for, and on that regard, the band does deliver. But amongst the low gutturals, frequent slam/blast switches, it all begins to blur together in a big mess. Those heavily into said style will appreciate the effort, but for the rest of us, it’s just another slam-filled death act. Only the sickest need apply. – Kyle McGinn (Guttural Corposa Cavernosa on Facebook) 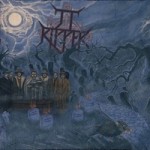 J.T. Ripper – Depraved Echoes and Terrifying Horrors (Iron Shield Records)
Short for Jack the Ripper, this German trio live for the raw speed/thrash that came out of their domestic scene as well as Canada on the debut full-length Depraved Echoes and Terrifying Horrors. Between bassist Steffen Fischer’s evil grunts and rapid fire delivery plus the sheer axe antics of guitarist Daniel Brandenburg, rounded out by drummer Chris Börner slamming his kit in a punk meets frantic thrash manner – all the requisite tools are necessary for the second coming of Venom, Sodom, and Razor. Quick licks and heads down speed make “Darkest Minds” and “Route 666” delectable to ardent 80’s collectors. Not a hint of commercial aspirations during this 9 track outing – J.T. Ripper slash and burn the only way they know how… full force. – Matt Coe (J.T. Ripper on Facebook) 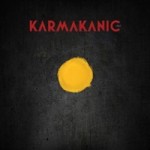 Karmakanic – DOT (InsideOut Music)
Sweden’s Karmakanic contains some known entities in the metal scene: Goran Edman singing for Yngwie Malmsteen in the 1990’s, while drummer Morgan Agren has played with Steve Vai and Tony Iommi in the past. Fretless bassist/guitarist Jonas Reingold is the main member driving the group, this fifth studio album DOT developed from a Carl Sagan text regarding how the Earth looks back in 1990 from a picture Voyager took in space. Musically we get ambitious progressive, symphonic-oriented rock here (ELP, Yes, Pink Floyd reference points) – “God – the universe and everything else no one really cares about” spanning two parts and 30 minutes of this 50-minute timeframe, for the most part lighter fare fueled with children’s choirs and exemplary piano support. The shorter “Steer by the Stars” has an energetic Yes spirit running throughout especially in the vocal harmonies that could raise eyebrows. Enlightening and comforting. – Matt Coe (Jonas Reingold on Facebook) 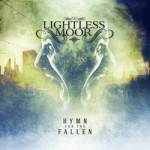 Lightless Moor – Hymn for the Fallen (Wormholedeath Records)
Some gothic/doom-y flair seeps through the sound of Lightless Moor on their second full-length album, Hymn for the Fallen. A mix of female cleans and male growls, it’s not exactly flowing towards uncharted waters. Lead vocalist Ilaria Falchi does have the pipes to get the job done, but unfortunately the music just never creeps away from the “ordinary.” Add to the fact that this one measures up to over an hour in length makes it a lot to take in during one session. There’s some potential here if they divert further into their own style (and do some track-trimming to cut down overall length), but Hymn for the Fallen comes across as just average. – Kyle McGinn (Lightless Moor on Facebook) 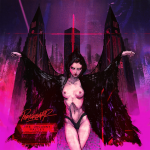 Perturbator – The Uncanny Valley (Blood Music)
Not metal, but an industrial drum-and-bass outfit led by James Kent, Perturbator warrants attention because of its affiliation with the excellent Blood Music label, as well as the cinematic quality found on The Uncanny Valley. Kent uses a variety of sounds to make his point, with the album supposed to tell the story of a motorcycle vigilante named Night Driving Avenger. Along the way, pulsating, hard-driving throb like a necro dance club of the future, the most notable being “She Moves Like a Knife.” In context, Perturbator is pretty worthy, actually. Just no metal, if you didn’t catch it the first time. – David E. Gehlke (Perturbator Facebook) 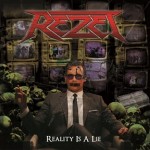 Rezet – Reality is a Lie (Mighty Music)
An album that is nearly an hour long, Reality is a Lie finds German thrash troupe Rezet ignoring one of the basic tenets of the style: leave them wanting more. While the nominal, if not expected array of ‘80s thrash riffs ring the bell at a moment’s notice, there simply is too many mid-level, plodding ideas across Reality is a Lie’s 12-song running order. Toss in a rather generic cover art, played-out lyrical ideas, and the aforementioned bloated nature, then Reality is a Lie is something worth being passed over. – David E. Gehlke (Rezet Facebook) 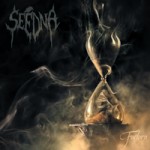 Seedna – Forlorn (Transcending Obscurity)
It doesn’t matter who you are, it takes a lot to keep a 22-minute song interesting. Rising atmospheric black metal act Seedna deal with exactly that challenge on Forlorn with the song “Wander.” Tossing in elements of doom and post-metal assure that the act give it their best shot and they are surprisingly successful at making a sorrowful and reflective piece that stays compelling from start to finish, with varied tempos. Elsewhere the band are just as focused and refined, being sure to be as emotive (“Passage”), aggressive (“Frozen”), or downtrodden yet melodic (“Abyssus”) as possible. A strong release from this Swedish act. – Kyle McGinn (Seedna on Facebook) 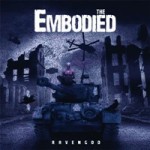 The Embodied – Ravengod (Pure Legend Records)
Residing in that heavier power metal class, The Embodied on album two Ravengod feature a potent twin guitar attack plus solid rhythm section action that straddles the fence between Iron Maiden harmonies and the more thunderous riffs that put In Flames and Soilwork onto international acclaim. “Vengeance” could be a lost Whoracle track through Marcus Thorell’s good cop/bad cop switch ups vocally, as well as an addictive guitar melody that weaves in and out of the arrangement – while “I Suffocate of Anger” just levels the competition through strong groovy riffs and killer Axel Janossy fills. Even the semi-ballad “Art of Hunting” has that much missed Sentenced morose nature amidst the traditional hooks. In other words, this band oozes Euro-fantastic class. -Matt Coe (The Embodied official website) 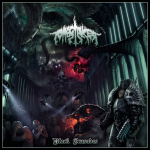 Tombstalker – Black Crusades (Shadow Kingdom)
A barreling, bulldozing freight of an American death metal band, Tombstalker hail from the unlikely region of Kentucky. Now, we’re not sure how many metal bands from Kentucky have made an impact, but Tombstalker are clearly one of the first to catch our eye. The band’s Black Crusades (originally released in 2015) is a demolition hammer of straight-ahead death metal in the tradition of Bolt Thrower and Autopsy, complete with the ever-faithful Stockholm guitar tone. An excellent signing for the largely classic metal-inclined Shadow Kingdom, it wouldn’t be a surprise to see Tombstalker become a regular on the American death metal festival circuit. – David E. Gehlke (Tombstalker Facebook) 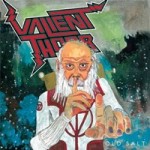 Valient Thorr – Old Salt (Napalm)
Southern style heavy rock with metal inflections for sure on Old Salt, the seventh studio album from North Carolina’s Valient Thorr impresses through passion. Bluesy with bottom end thump, the guitar work careens between Fu Manchu and Clutch, while the vocals have that southern doom swagger meets bar room boogie. Early 90’s C.O.C. and Thin Lizzy also crop up on the hooks for “Lil Knife”, while “No Count Blues” could be a long lost Motörhead cut stripped down to 90 dB’s. If the addictive, high energy musical hooks and solid pocket tempo groove changes don’t grab you, the maniacal vocals should at least stir brain matter. When performing 1500 gigs over the past decade and a half, you are bound to get tight and focused at your craft. Valient Thorr pour a musical salve into those battered wounds. – Matt Coe (Valient Thorr on Facebook)