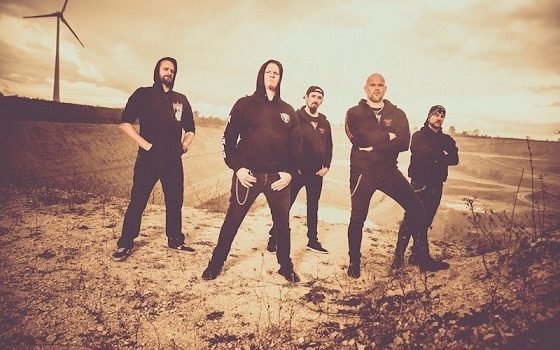 The first Rapid Fires of the year means we’re out from under the fervor of year-end list time and last-minute releases. There are complaints with a crowded metal release calender – it just gives us more to write about, apparently, and, new bands in which to delve into. Up for debate this month is Bohren & der Club of Gore, The Conjuration, Feral Vision, Frayle, Marko Hietala, Krvsade, Napalm Death, Pyogenesis, Secret Alliance, Surgical Strike (pictured), Tzun Tzu, Raphael Weinroth-Browne, Wolfpakk, and Yatra. 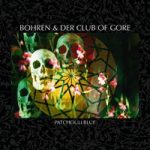 Bohren & der Club of Gore – Patchouli Blue (Ipecac Recordings)
Anyone wondering what jazz would sound like when coupled with a stong, dark atmosphere almost akin to a cinematic sense of doom? Wonder no longer, as Bohren & der Club of Gore have been dabbling into these waters for quite some time. There’s almost a noir film vibe to these tracks – it’s easy to conjure up images of a private eye’s office in an evening rain, nightclubs, and smoky rooms when the gentle saxophone and piano are hitting their strides with the bass. Not metal in the least, but the darker vibes and atmosphere make it something that fans who are looking to just unwind a bit may find compelling. The songwriting and style is exceptional, and the amount of bleakness and grace completely works. – Kyle McGinn (Bohren & der Club of Gore on Facebook) 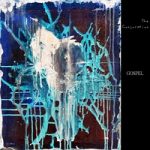 The Conjuration – Gospel (Self-Released)
Experimental one-man act The Conjuration is all over the place with Gospel, but it’s done so in the best way possible. There’s never a lack for extremity, and the music is very dense and complex. It has a tendency to jump from moment to moment as well, which will keep you on your toes. But after you’ve given it a few good listens, it starts to really click. The death metal-prog-math-djent-etc etc mixture really allows it to spread some wings and soar. The melodies and atmosphere start to dig in more with each listen and the dives into some quirkier territory is appreciated (check out “Disassociation Trance”). It won’t appeal to everyone, but if you want something that captures brutality, dissonance, and extreme prog, it’s worth checking out. – Kyle McGinn (The Conjuration on Facebook) 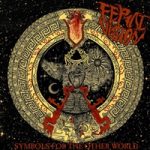 Feral Vision – Symbols for the Other World (Self-Released)
Paying homage to a mix of thrash/death crossover sounds from the late 80’s and early 90’s, Chicago’s Feral Vision pummel through intense execution and relentless energy on their latest EP Symbols for the Other World. Expect ripping riffs, equally vicious rapid-fire vocals, and drop on a dime transitions that recall the best of Demolition Hammer, Sepultura, and the recently departed Dew-Scented. The blitzkrieg rhythms within the title track plus the stair-step tempo changes and supplementary divebomb breaks during “In Pursuit” should keep the metal mavens mad with rage, jostling and bustling about to the aggressive proceedings. Plus – it’s available on their Bandcamp at an attractive name your price value. With any luck, the next effort will be a full-length as this is worthy of label attention. – Matt Coe (Feral Vision on Facebook) 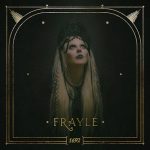 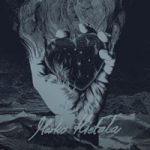 Marko Hietala – Pyre of the Black Heart (Nuclear Blast)
Nightwish bassist/singer Marko Hietala sets out on his own solo album foray for Pyre of the Black Heart – a ten song affair that explores calmer and melodic hard rock terrain beyond his conventional work through Tarot and Nightwish. You’ll get an alternative, semi-gothic tranquil feel for “The Voice of My Father”, Celtic-folk aspects to the powerful “Runner of the Railways”, on through to a quieter ballad for “I Dream”. Marko’s voice and songwriting diversity proving his dynamic versatility, a willingness to pour his heart and soul to the world. An ideal departure, this record contains bold shapes and left-field ideas that should appeal to ardent followers of Marko’s discography for decades. – Matt Coe (Marko Hietala on Facebook) 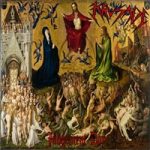 Krvsade – Judgement Day (Self-Released)
Injecting some blackened death into their thrash platform, Charlotte, North Carolina is home to Krvsade, and this three-song EP Judgement Day shows the quartet at a potent stage in their career. Acidic/extreme vocals, riffing that is very raw and powerful, and a rhythm section willing to play tight and at times with abandon, it’s evident as you check out “Keep It in the Church” and “The Key and the Gate” that there’s a love for Slayer, Sepultura, Vader, Belphegor, and Kreator depending on the arrangement and performances. Longer instrumental sections allow the group to flesh out their parts with flair and sophistication – be it tribal marching moves that give chase to progressive guitar/time signature manipulation before the next heavy part careens against your headspace. One to keep an eye on for sure. – Matt Coe (Krvsade on Facebook) 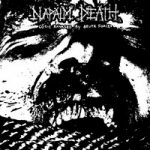 Napalm Death – Logic Ravaged by Brute Force (Century Media)
A new 7″ from the grind/death masters features the first new track from the band in 5 years. It’s a precursor to an album said to be released later this year, and as such, “Logic Ravaged by Brute Force” and it’s B-side Sonic Youth cover “White Kross” give the first taste of what’s to come. The title track is a bit lurching with some clean-er talk/singing in the verses giving way to Barney Greenway’s barks in the chorus. But it’s a moody and catchy track that speaks to a band that continually tries to bring in different ideas and has some solid groove. The Sonic Youth cover is obviously a bit heavier than the original but plays things otherwise pretty straight. It’s an enjoyable first taste, and builds up the excitement towards a larger release to come. – Kyle McGinn (Napalm Death on Facebook) 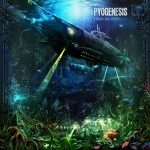 Pyogenesis – A Silent Soul Screams Loud (AFM)
The ever-polarizing Pyogenesis, who, in their early days was a rather formidable death-doom band, has seemed to of landed firmly in heavy alternative territory with A Silent Soul Screams Loud, their third album since their 2014 formation. But, in true Pyogenesis fashion, there’s a twist and a left-turn, notably with the band’s use of fast, almost blast-beat like drumming. While these elements liven up the pot, the band will forever do or die with vocalist/founding member Flo Schwarz, whose vocals are the dominant force an album that will continue to muddle perceptions of the veteran Germans. – David E. Gehlke (Pyogenesis Facebook) 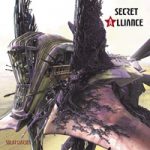 Secret Alliance – Solar Warden (Punishment 18 Records)
Founded by Time Machine guitarist Gianluca Galli, Secret Alliance is a collective of superior musicians performing in a progressive classic heavy rock sound for this full-length Solar Warden. Add in a killer rhythm section with ex-Angra drummer Ricardo Confessori and bassist Tony Franklin, plus the bluesy/soulful voice of Andrea Ranfangi, and you have all the makings of some memorable performances. Vibrant progressive rhythm section parts shine against catchy, groove-laden heavy rock – incorporating 70’s/80’s influences a la Whitesnake and Deep Purple against some Queensrÿche-textures, making “Walking Man” and “Comet Smile” two standouts. The Sabbath-esque doom stomp within “Dark Side” also allows Andrea to stretch some of his higher range screams and note sustaining abilities. Putting musicians in the right positions, this material shines and is worthwhile for those who love melodic hard rock put into a progressive context. – Matt Coe (Secret Alliance on Facebook) 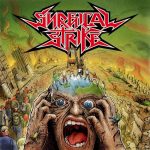 Surgical Strike – Part of a Sick World (Metalville)
Interesting story behind Germany’s Surgical Strike: The band formed in 1993, disbanded three years later, reformed in 2014 and in the here and now (2020) is releasing a pretty impressive offering of melodic thrash by way of Part of a Sick World. Essentially an amalgamation of late-era Kreator and Zetro-era Exodus, Surgical Strike’s tunes make quick work of things, working in complex riffing with choruses that be for a call-and-response. It’s awfully difficult to make thrash sound interesting at this stage in the game. Surgical Strike has pulled it off. It only took them a while to do it! – David E. Gehlke (Surgical Strike Facebook) 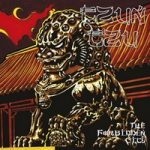 Tzun Tzu – The Forbidden City (Lavadome Productions)
Tzun Tzu offers us another small ‘taste of the future’ with this 3-track EP, showcasing one new song (the title track) and two older re-recordings. This is punishing death metal in all of it’s full-blown glory, and coming in with no knowledge of their previous release, it accomplishes it’s goal of whetting the appetite for new material. There’s some Eastern influences here with the lyrical content, but not too much outside of that (there is cool little atmospheric break that builds up on “Kunoichi”). Instead the band provides some exhilarating speed and mixes it up with some slower and mid-tempo stuff to keep from being one-note. Some may feel like ‘more of the same’ from a death metal standpoint but if they utilize a few more Eastern-styled moments on their next album, it could provide some real intrigue. – Kyle McGinn (Tzun Tzu on Facebook) 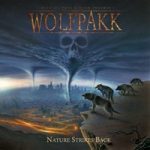 Wolfpakk – Nature Strikes Back (Massacre Records)
Delivering passionate music, Michael Voss and Mark Sweeney are the masterminds behind Wolfpakk and their fifth studio album Nature Strikes Back. Featuring 32 guest musicians (Michael Sweet, Mikkey Dee, Jeff Waters, Mats Levén just on the short list), the eleven songs run the gamut of bluesy melodic hard rock to metal efforts. You can expect high octane vocals during a more neoclassical offering for “The Legend”, whereas “One Day” lays into more of a Priest/Accept-oriented anthem affair with a mix of smooth and gritty voices. Far Eastern aspects penetrate the potent “Beyond This Side”, while a horn section and bomb blast sends “Revolution” into military power splendor. Similar to Avantasia in concept, but perfect for those into the traditional melodic metal / hard rock sectors. – Matt Coe (Wolfpakk official website) 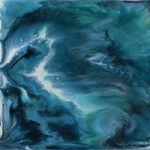 Raphael Weinroth-Browne – Worlds Within (Self-Released)
Even if you don’t immediately recognize the name Raphael Weinroth-Browne, chances are you’ve heard his cello in a larger act. He’s built himself up in working with bands such as Leprous, Musk Ox, The Visit, and others, and this is his first solo effort. Worlds Within is a single composition that is broken up into 10 pieces, and really should be listened to in one sitting to maximize your experience. There’s some incredible flow as the release progresses, and it ebbs and flows between more ethereal and atmospheric moments to some surprisingly intense ones (see “From Above”) – all with the focus on his cello. It’s an absorbing listen, and as instrumental releases go, it keeps a cinematic flair that eases you into conjuring up images to coincide with the music itself. – Kyle McGinn (Raphael Weinroth-Browne on Facebook) 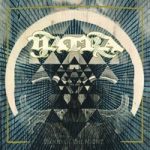 Yatra – Blood of the Night (STB Records)
Yatra’s new record Blood of the Night hosts some of the bands’ most precise performances, with the songs boasting echoes of classic sludge/doom bands not unlike Inter Arma or Acid King. Gnashing guitars and raspy vocals abound in this 45-minute beast. But after all that sonic bludgeoning, the entire record still feels like one massive song, what with repetitive riffs and recycled solos. Blood of the Night barely held any interest, and that is the album’s error. Performances=top-notch. Songs, on the other hand, fell prey to the riff recycler regrettably too often. While not a downright terrible album, it also is just a lukewarm collection of songs that were done better by the aforementioned Inter Arma, and performed with such fervor that any listener’s interest is held aloft. Yatra may have it in them still, but this ain’t it, chief. – JE Batin (Yatra on Facebook)