Our first Rapid Fires entry of the year, the January installment finds us tackling 12 bands in our short, but oh-so-concise review column. Per the usual, some quality abounds, while some duds populate the pack. Up for debate this month are the following: Aborted Fetus, Ashencult/Mephorash, Astral Domine, Chrome Division (pictured), Cult of Occult, Ethersens, Fallen Fate, Necroven, Northern Plague, Nuclear Omnicide, Starsoup, and Suncrown. Read on!

Aborted Fetus – Private Judgement Day (Comatose Music)
Aborted Fetus’ fourth album certainly owes much of its existence to another Fetus, of the Dying variety, as well as Severe Torture. The vocals gurgle their way indecipherably throughout, while the music unabashedly blasts, grinds, and slams it’s way through 25 minutes of unrelenting audio terror. While it’s nothing new, the sheer intensity of the band should be enough to counter that feeling of déjà vu for most. The title track, at 4:30 minutes, seems a bit more fleshed out, with a surprisingly pleasant lead, and points towards an interesting direction should the band chose to go it that way in the future. – Kyle McGinn (Aborted Fetus Facebook)

Ashencult/Mephorash – Opus Serpens (Unholy Anarchy Records)
Black metal fans may want to take note of this 10” split between Ashencult and Mephorash. Both bands take their own route, but manage to incorporate plenty of mood into their black metal attack for a result that is both pure and memorable. Ashencult is the thrashier of the two, book-ending their speedy, riff-driven material with some ominous sampling and atmosphere. Mephorash’s track includes organs, choirs, and a bit of occult feeling to keep their 9-minute track afloat. Both bands being somewhat new upstarts (Ashencult has one full-length and Mephorash has two), it’s safe to say we’ll be hearing more quality material to quench the hunger Opus Serpens leaves us with soon. – Kyle McGinn (Ashencult Facebook/Mephorash Facebook)

Astral Domine – Arcanium Gloriae (Bakerteam Records)
Rhapsody of Fire’s Fabio Lione pops up on this thing, on the first song, “Holy Knights,” no less. So to the unfamiliar ear (i.e. someone who didn’t peruse the band’s bio), Astral Domine could be mistaken for another ROF go-round. Such is quandary when putting a popular face on the lead track of your album – this Italian act probably didn’t have to go such a route given the relatively airy/competent range of their Arcanium Gloriae debut. As is the case, this is Italian symphonic metal at its most tried-and-true, full of piano breaks, vamping melodies, and nifty fretboard action. Not sure who would get something out of this beyond what has already been done, but hey, there’s a reason this stuff has hung around for so long, even after the critical beating it has taken. – David E. Gehlke (Astral Domine on Facebook)

Chrome Division – Infernal Rock Eternal (Nuclear Blast)
Two Chrome Division albums since the last Dimmu Borgir effort…the execs at Nuclear Blast must be getting restless, right? Shagrath’s iffy biker rock band hasn’t quite cemented its appeal on these shores, still translating as something of a passing fancy where songs about busty chicks and drinking get the visual treatment for dudes to gawk at, but not much more. The band’s fourth album, Infernal Rock Eternal, is more of the same, with Susperia throat Athera (going by “Shady Blue” here) doing the majority of the heavy lifting (see: “(She’s) Hot Tonight”). But nothing worth going nuts about here…just twiddling the ‘ole thumbs for a new Dimmu. – David E. Gehlke (Chrome Division Facebook)

Cult of Occult – Hic Est Domus Diaboli (Total Rust)
Snazzy, memorable name, but my goodness, just some of the most bottom-of-the-barrel sludge doom going. The 70 minutes and counting of France’s Cult of Occult’s Hic Est Domus Diaboli reveals a lazy, nondescript brand of distortion laden doom, the type where virtually no creativity factors into the riffs, and one-dimensional, indecipherable screams are a constant. All of these cuts go past the ten-minute mark, so, if one wants to grab a snack or do the laundry, then revisit these utterly lackluster cuts, that would be a wise move. Just some insufferably bad stuff all the way around. Total caveman. – David E. Gehlke (Cult of Occult Facebook)

Ethersens – Your Wandering Ghost (Scarlet)
Don’t be quick to take the bait on the “French avant-garde” label bestowed upon Ethersens – they’re not all that avant-garde, but they sure are French! But seriously, their presentation drifts more toward the rock-ular pose of bands like The Old Dead Tree or Marble Arch, as in, there’s some metal, but the riffs are too light in the loafers and the vocals don’t have any degree of hookiness. The linear quality (if “quality” is where we want to) to Your Wandering Ghost ends up being the element that holds it back the most. Across these eight songs, the prospect of a glimmering, ethereal moment to clasp onto never quite comes. Sure, “This Is Where You And I Part Ways” is the prerequisite number riled up with dynamics, but the rest, is in short supply. – David E. Gehlke (Ethersens Facebook)

Fallen Fate – Into the Black (Self-Released)
Viva la metalcore? Say it ain’t so. First, I Killed the Prom Queen come out of hibernation, and now this. England’s Fallen Fate might be a few years late to the party (how about eight?), but they’re well-concocted, thematic brand of metal-of-the-core doesn’t ring as hollow as it would initially suggest. Indeed those Swedish gallop-a-long riffs are in full force, keeping the tempo afloat so the keyboard washes can give an atmospheric blend, therefore, the bottom never quite falls out of Into the Black. It’s a concept album (no detail of it in the band’s bio), but apparently it’s about the chick on the cover and her various plights. How fitting: A woman in distress in the context of metalcore. Atreyu were great at that! – David E. Gehlke (Fallen Fate official site)

Necroven – Descent into the Cryptic Chasm (Blood Harvest)
The singular vision of one J.R., Spain’s Necroven already has one full-length album under their belt (2011’s Worship of Humiliation) and this 7” EP serves as more or less a teaser until more material can be brought forth. Necroven play classic death metal, though thankfully they are not a band that spends too much time blatantly ripping off Dismember, Autopsy, Death, or the rest of the usual suspects. However, it’s still nothing you haven’t heard countless times before stylistically speaking, which could be a sticking point if you’re burnt out on this sort of thing. Consider it as is: two songs of solid death metal, well performed but lacking an individual identity. – Kyle McGinn (Necroven Facebook)

Northern Plague – Manifesto (Folter Records)
In the fine Polish death metal tradition of bands like Vader and Behemoth, comes Northern Plague. For the band’s first full-length, Manifesto nails all of the bells & whistles where it should, the problem is that they sound far too similar to the aforementioned Polish legends. Militaristic riffs and drumming only further lead them down this road, as the speedier tracks like “Reign Mother War” exemplify. Otherwise, the album is quite well written with plenty of headbang-friendly riffs (particularly the more mid-paced “Legion”), so hopefully with some more time they will begin to bring in more of their own sound to the table. – Kyle McGinn (Northern Plague official site)

Nuclear Omnicide – Bringers of Disease (Violent Journey)
Old school death/ thrash with a lot of crossover appeal, Bringers of Disease, this six-song EP from Finland’s Nuclear Omnicide has all the gang-oriented choruses and subtle build ups/ sudden speed transitions you’ve come to know and love in the genre. Wasting no time getting to the frantic proceedings with the 85-second “We Came To Thrash!” the quartet love S.O.D. as much as Municipal Waste, Dark Angel as much as Nuclear Assault. Check out “Curse of the Undead” and the dive bomb tactics vocally and musically in “Merciless Butcher” and prepare for an aural beatdown. Two EP’s and one full length album in three years, Bringers of Disease is ferocious and essential for thrash mongers everywhere. – Matt Coe (Nuclear Omnicide Facebook)

Starsoup – Bazarre of Wonders (Sublimity Records)
The “Starsoup” moniker doesn’t exactly inspire confidence in pre-listening moments. Perhaps if they went by “Star Wedding Soup,” then the needle would point in the right direction, for after all, wedding soup is the best soup of all. Never the matter, Starsoup is a studio project led by Russian musician Alexey Markov, who brings in all sorts of native guests to lend to his Bazarre of Wonders debut. Sonically, this is AOR-tinged progressive/power metal, with some songs missing the mark (see the goofy “Ain’t No Superman”), while the Dream Theater tide of “Past Bites” has some draw, while the poppy balladry of “Road to Sunset” might be a tough road to travel for some. And don’t be fooled by the inclusion of a song by the name of “Perfect Loser.” It’s not the Ozzy version. Darn. (Starsoup Facebook)

Suncrown – You Are Not Alone (Self-Released)
About as symphonic and/or epic as anything one will hear in the first quarter of 2014, Suncrown’s sophomore album You Are Not Alone corrals all sorts of international flavor. The band comprises of members from Brazil, Turkey, Norway, and the United States, while guest spots from India and Israel lend to the album’s diverse flavor. Of course, none of this means squat if the songs don’t have any traction, but quite a few do, most notably the rousing “The Beginning is Near,” ballad-action of “Just Like You” (lighters required) and Euro-ready “Open the Winds.” And for an unsigned entity, this is rather pro stuff, making DR ponder when/if a Euro label with its hooks in the Goth/symphonic metal canon will take a flier. – David E. Gehlke (Suncrown Facebook) 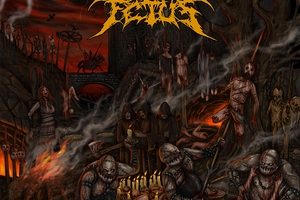 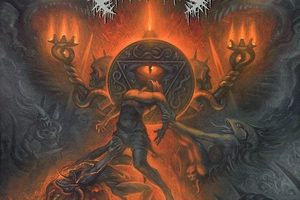