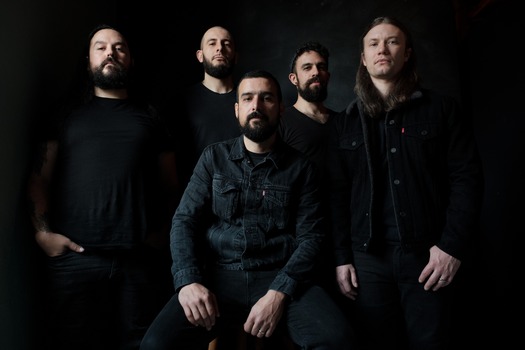 There’s not a ton of bands that can say that they put out their first release on a large label, like Nuclear Blast Records in this instance. Therefore it’s a telling sign of the potential that a band like Irist has. Their recent debut, The Order of the Mind, takes some influence from the current scene but also adds in it’s own unique flavors for a sound that’s rooted in heaviness, but can play with atmosphere and melody as well. We caught up with vocalist Rodrigo Carvalho to get some further insights into the band, such as how they came upon their name, their goals, and how they managed to grab the attention of Nuclear Blast.

Dead Rhetoric: How did you come up with the name Irist?

Rodrigo Carvalho: We actually were just thinking about a band name, and I looked a few words that I thought were interesting. The root of the word, ‘iris’ is one I like. There’s also ‘ire’ – there are so many words that look similar, having ‘ire’ or ‘iri,’ so we kind of came up with this name where it doesn’t really mean anything. But it has components of words that we thought were cool. It was fun to play around with the word play and make it what it is.

Dead Rhetoric: What makes Irist stand out to, as a band?

Carvalho: When I wasn’t part of the band, in the beginning I was able to have the perspective of a fan. I liked the music a lot but hadn’t joined the band yet – what I liked about it, and what made the band unique was the rhythm patterns. Most metal bands didn’t have that sort of rhythm or drum beats. They sounded really unique. They don’t follow the canon of the genre, per say. Also the melodies were incredibly big and deep. So that’s what I felt before I joined the band, and I think those are our greatest strengths.

Dead Rhetoric: Do you feel that the ‘brewing period’ for a few years before you recorded the album helped with it feeling like a more mature effort?

Carvalho: Yes, I do. We demoed everything a lot and we let it sit to see how it feels. After a month, if it still sounded good, we accepted it. We had to let the songs mature for a while. Some of the songs were written in 2017, so it took a while before they took shape.

Dead Rhetoric: What do you feel is key in the band’s songwriting approach?

Carvalho: I guess going through a lot of steps in our writing. Pablo [Davila] comes up with most of the music. He plays drums too, on top of playing the lead guitar role in the band. So he comes up with parts that already have drum, bass, and guitar parts in it. He spends a long time with that. By the time he shows me anything, it looks pretty good. So I put some scrap vocals on it and then we adjust the rhythm patterns and cadences of the vocals. Then new ideas pop up. Then we take it to Adam’s [Mitchell] studio to start layering a final version of the songs. Eventually some new things are brought in, but that’s basically the last step of it. I think the fact that we go over it so many times helps a lot with the songs. It goes through a lot of different steps and revisiting things helps too.

Dead Rhetoric: Three of you came from South America to start this band. Was that to start the band or was it coincidental?

Carvalho: It was completely coincidental. Bruno [Segovia] and Pablo came to the States when they were kids still. They came back and forth a few times. They moved in the way that most immigrant families move, to have a better life. I came much, much later. I was already 24 and had a scholarship here, and ended up staying and getting married. But the two of them met like 10 years ago and started doing music together. I hopped in much later. I have known them for 4-5 years – we are like best friends and stuff. We tend to hang out a lot.

Dead Rhetoric: Where do you draw your lyrical inspirations from?

Carvalho: I don’t think I have a specific source for anything. A lot of it is the way I am thinking at the moment. It’s very circumstantial. I do like, when I write lyrics, to priority imagery over a narrative. The songs may feel a little fragmented because of that, since it’s a collection of images. Sometimes you can get a clear narrative from that but sometimes its more difficult. In the end, there’s always some sort of story you can draw from. Some are just more obvious than others.

Dead Rhetoric: Is there some sort of meaning behind the album art?

Carvalho: I don’t think so. We were looking for an artist and we came across Alex’s artwork and we really liked it. At one point we were choosing between 3-4 options that he had. The current one wn the voting, as we tend to decide things that way. The connection that exists between the artwork and the album is a very subjective one and very abstract. Somehow, the dark mood that it the image has, with the statue standing alone being very lonely – but it’s still very majestic and pretty; I think that also conveys the lyrics and music too. But there’s no clear cut meaning to it.

Dead Rhetoric: How did you catch the attention of Nuclear Blast?

Carvalho: When the band was still starting, the guys recorded an EP and sent it to Matt Bayles to mix. He really liked it and sent it to Monte Conner. Conner really liked it too, but he didn’t sign us yet. He sort of put us on hold. Eventually the other vocalist stepped down and I joined the band, so we had to send in some updated demos. It was a few months after I joined that we had to send something out to him and try to impress him to get the deal done.

It was a lot of pressure on me since I just started. But we managed to do it and he really liked it. He wanted to sign us, and that’s when we really went full-in on getting Order of the Mind done. We had to record something since we got the deal done. That was a year and a half of intense work. Basically all weekends at Adam’s studio writing things out and jamming. It was a heck of a year, but a great one.

Dead Rhetoric: Do you feel any of that pressure now that the album is out and it’s going out all over the world or are you more confident since you’ve gone through the album so many times?

Carvalho: At this point, we’ve done everything we possibly could so there’s no need to really get anxious about it. We did our best and it’s our first album, so there’s probably more to learn along the way. We feel good about it, and we feel excited to go out and play on tour.

Dead Rhetoric: What would you like to see the album achieve – what goals do you have for the band?

Carvalho: We don’t have anything specific as far as that goes. We really just want people to like our music. We don’t have numbers or anything, we are just hoping for the best. We hope people like it as much as we do.

Dead Rhetoric: Who are some of your biggest vocal influences?

Carvalho: It’s hard to say since I like so much stuff. In Latin America, we listen to a lot of Latin music, but also heavier music. I grew up with a lot of punk and hardcore. Especially British hardcore and punk. I always liked the ones that sounded a little heavier. The Buzzcocks, GBH, The Exploited – those always got my attention. The vocalist from Total Chaos, I really liked him. With metal, the first band I heard was Kreator, and Sepultura was always there in front of me too. Its funny, I want to believe our music is very current, but our influences are not very current. We always have bands nowadays we like, but I’m 38 and I listen to a lot of old stuff too.

Dead Rhetoric: Living in Latin America and then in the US, knowing that it’s two different things – is there a comparable difference between the two scenes?

Carvalho: It’s hard to say – when I was in Latin America, I was in a place where the scene was mostly punk and hardcore; there was very little metal. Atlanta is much bigger, and I was from a small town. I would have to go to another city to get access to local bands and go to shows. There were none in my town. So coming to Atlanta, it’s enormous. There’s so much going on. There are bands and great shows every day. Its incredibly different not just because they are different countries, but because of the size of the cities. I’m sure if I went to a bigger city in Latin America, it would be a different experience.

Dead Rhetoric: What’s on the horizon for 2020 with the band?

Carvalho: We want to play, play, and play…until we pass out on the floor. We have been sitting on this album for so long. We’ve got Damnation Festival confirmed in the UK. We will start posting dates for tours soon, for this year. Next year we don’t have much yet. They will come up on social media. As a band, what we’d like to do is just play and get out of the studio for a bit. 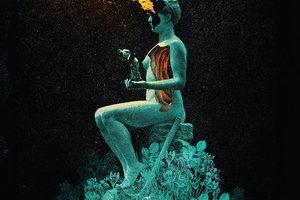