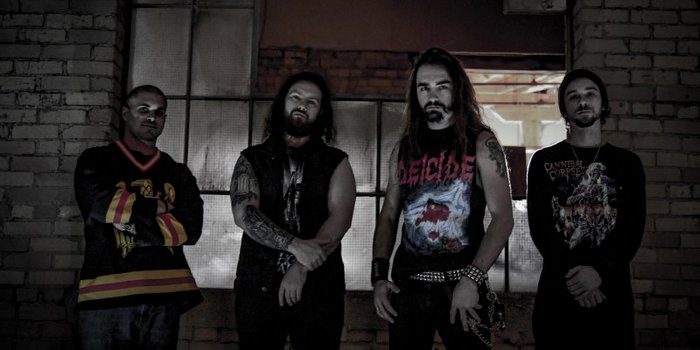 Dead Rhetoric: Where does the band come from on the lyrical front? What do you hope to get across to the listener, and do you place as much importance and energy on the lyrical content and melodies as you do on the music?

Edissi: I don’t spend too much time thinking about lyrics. Any messages that I want to get across to the listener can be read/listened to. Of course, anything I write can be taken with a deeper meaning or what not if you spend time thinking about it, but I try to keep it all out in the open. The energy I spend on lyrical content is mainly on word choice and delivery. I want it to just be sick, not cheesy, not deep and philosophical, just sick. When I write lyrics I always write over the top of the riffs. That way I can already have the rhythm pattern down, so I know it is doable while I play the riffs on guitar. Luckily the only lyrical melodies I have to spend time figuring out are where I want the lows, mids, and highs because I don’t do vocals to pitch. Figuring that out comes naturally for me with the words and part of the song.

Dead Rhetoric: How did the cover art concept develop between Mario E. Lopez M. (Evil Invaders, Game Over) and yourselves? Was it a back and forth, collaborative process between artist and the band, and how do you feel about the final output?

Edissi: I love good album art. I follow artists on Facebook and Instagram just because I enjoy looking at it as a fan. When I saw Mario’s cover for the Game Over album Claiming Supremacy I was like ‘Woah shit that’s sick! He is going to do Halls!’

I came up with the cover after hearing Neil DeGrasse Tyson say ‘Welcome to the Halls of Extinction’ in the Cosmos series on Netflix. I instantly knew that had to be the title of the album and thought of the temple/tomb with five pillars with fossils that represent the five past major extinctions and the sixth pillar incomplete with a skeleton with bullets, money, and a rosary representing humanity’s inevitable extinction.

When I told Mario my idea, he thought it was sick and even did his own research to make it as accurate as possible. Right from the sketch I knew it would be perfect. I had only gotten the sketch and the final product so I was anxious to see how the coloring would effect it, but when he sent the final (artwork) my jaw dropped. It was better than I had imagined, and we are beyond thrilled with how it came out. We definitely plan on working with Mario for future releases!

Dead Rhetoric: Is it fair to say that Invicta possess a diverse outlook on your brand of melodic, brutal thrash metal – incorporating a wide array of influences including death, technical, power, and traditional influences? Are there certain qualities or aspects that have to be in place in order to know when something specifically fits or works for the band?

Edissi: Of course. Invicta is just a melting pot of all the metal that we enjoy and listen to regularly. I always say I am a metalhead and fan first, musician second. So when writing I always try to write things that make me stoked and want to listen to. As for specific material for Invicta, as long as we think a part or riff is sick we can make it work. I don’t think there is anything really off limits, unless it’s something not sick which we won’t include on anything.

Dead Rhetoric: How would you describe Invicta when it comes to your live performances? What have been some of the most memorable shows to date for the band?

Edissi: Invicta live is fast and in your face, I would like to think. We always give it 300% live because we believe that the fans paying to watch deserve that. Our best and most fun shows are always the hometown shows with Raider and Cathartic Demise because those guys are our best friends and we can pack venues and have crazy shows!

We are currently on tour across Canada supporting the release of Halls of Extinction. Some of the best shows we have had on the tour so far are; Kelowna, Calgary, and Regina! The best show being the album release in Kitchener.

Dead Rhetoric: Who are some of your favorite bands that you would love to model your career after – either for their professionalism, outlook on the metal movement, or discography and development as a whole?

Edissi: Kreator, Revocation, Something Wild-Hate Crew Deathroll era Children of Bodom, Deicide, etc… all the bands that have inspired me/us we try to take notes and follow in our own footsteps.

Dead Rhetoric: What concerns you most about the world that we live in today? Where do you think people need to pay attention and get involved to change things for the better of the world as a whole?

Edissi: Man, where do I start… all I’ll say is people should stop focusing so much on themselves and pay attention to those and the world around them. No one is special, everyone is suffering in some sort of way. Stop masking your problems, embrace them and try to fix them, try to better yourself, for yourself and for those around you. Don’t be an asshole and treat everyone exactly how you would like to be treated. That’s what I try my best to do.

Dead Rhetoric: What are some of your favorite hobbies and interests to pursue away from music when you have the free time to do so? Do you share any of these passions, activities, and interests with fellow band members?

Edissi: I enjoy watching documentaries and certain shows and movies. I’m a big Marvel comics fan and a big Dragon Ball fan. I also love watching European soccer, my favorite team is FC Porto and will always be. Most things I do even on my free time are music related. We are all very different outside of music which I think helps us because we don’t compete with each other. One thing we all do enjoy doing is crushing beers with the boys! Cheers bröther!

Dead Rhetoric: How important have the tools of instant communication, cell phones, and social media platforms been to promoting and developing the band? Obviously you are a believer in Bandcamp, do you think that platform alone has been a game changer for a DIY band such as yourselves?

Edissi: I am on my phone constantly. Jonah has an embarrassing amount of video footage of me just on my phone without knowing he is filming (laughs). Without social media and the instant communication, doing DIY tours and album releases would be a huge struggle. Social media has become such a normal part of everyone’s daily routine so not taking advantage of that would be stupid in my opinion. Bandcamp has been huge in the growth of not only underground metal, but music in general.

Dead Rhetoric: What’s on the agenda for Invicta over the next twelve months to support this record? Are there plans for touring outside of Canada to spread the Invicta message to other parts of the world, and have you already started work on the follow-up effort?

Edissi: We are going to try to plan to do maybe a mini-tour or something, but we have to make sure all the logistics work out before we can guarantee anything. I would love to do a North American tour as soon as possible but the timing and conditions need to be right. Luckily because of social media we are already pretty global. We are trying to continue our global reach in hopes to get tour offers overseas and such.

I already have a stockpile of riffs ready to use for the next record. As soon as this tour is over, I am going to start writing more riffs and arranging songs into skeletons and such. Hopefully the second album can come sooner than later, I think it might. 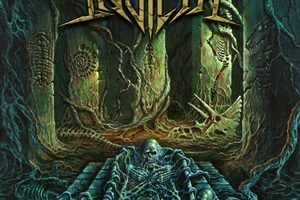