Insomnium – The Sound of Sorrow 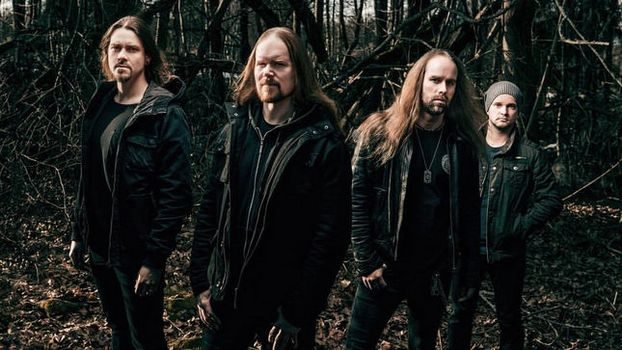 A band that has seen plenty of love and attention within these pages, Insomnium have been and continue to be one of the leaders when it comes to melodic death metal. Their sorrow-fueled melodies provide a certain level of catchiness without pulling too hard in the modern direction. They’ve set and maintained the standard when it comes to gloom, and it’s easy to rattle off names of bands that have attempted to emulate their sound.

Their last album, Winter’s Gate, a 40-minute song in the tradition of Edge of Sanity’s Crimson, saw the band really reaching outside their usual box to deliver something truly special. A strong story with sweeping melodies and movements that once again proved that Insomnium are at the top of their game. Their first time across the Atlantic promoting said release was for the recently finished Epica and Lacuna Coil tour. On the last gig of the tour in New York City, we sat down with vocalist/bassist Niilo Sevänen to reflect on the tour (and tours to come), Winter’s Gate itself, and where the band sits in the melodeath spectrum.

Dead Rhetoric: So it’s the last day of the tour, how’s it been going?

Niilo Sevänen: It’s been a very nice tour run. The shows have been good, and all the people on this tour have been very nice. We knew the Epica guys before; we’ve toured with them before. They are great people. We got to know Lacuna Coil and Elantris, and they were are all really nice. It’s been a smooth ride. One month has passed very quickly when you think about it. It feels like we just started and now it’s ending. Of course, at this point in the tour you are a bit tired and looking forward to going home, but it’s been a great tour.

Dead Rhetoric: Has it been a lot of packed crowds for the most part?

Sevänen: Yeah, there’s been big crowds and some of the places were sold out I think. In Montreal we had a really big crowd. Today might be something similar. I think these are the biggest two shows on the tour – Montreal and New York City. We’ve had our own headline dates too. When Epica had a day off, we thought it would be better to play our own shows here and there. They have been nice. They were different of course; smaller and in funny places like Panama City, Florida. But still, there are people there who like us and it’s a good show. They are really enthusiastic. So they are different but very nice shows also.

Dead Rhetoric: I know that you’ve been pushing a little harder in the last few years here in the US, are you getting more people on these headline shows? Are you ever surprised at the turnout in that there are more people than you thought were going to show up?

Sevänen: I think the headline shows were what we expected them to be. They were in some pretty strange cities…not the biggest cities. But next year the plan is to come here and do a headlining tour and see how many people we could get here, like when we play Montreal and New York [City]. That would be interesting to see. But definitely with Winter’s Gate we’ve made another step already. With our career, it’s been slow but steady climbing. We gain a little with each album. We are very lucky that it’s been like that.

Dead Rhetoric: With this being the last day, of course I cheated and was looking through your set list that you’ve been playing. Has it been tough to play only part of Winter’s Gate?

Sevänen: In the beginning it felt strange, because we feel like it’s one song really. Even though for like, Spotify, you have to cut it up. It’s really one song, so playing just a couple of parts felt weird in the beginning but we’ve gotten used to the idea that we are only doing a few parts of it. I think the set works well – 45 minutes. With our headliner shows we’ve played the whole thing of course. Winter’s Gate is supposed to be played as a whole.

Dead Rhetoric: With your set-time you could have chosen to pack the whole thing in there. Did you choose to toss a few older songs in for familiarity’s sake, or so that you weren’t investing all of your time into one album?

Sevänen: Both ways…when you are supporting bigger bands, you have to think about what the audience will be. If we play a 40-minute song that they haven’t heard before, it would be too much for sure. That was one reason. We play a bit from several albums instead. It’s easier to digest.

Dead Rhetoric: In terms of Winter’s Gate itself, was it different having full lyrics and a story laid-out before any of the music was written?

Sevänen: It was different. We had the story; I think it kind of set the mood for the whole thing. It became this cold, dark, kind of black metal-ish style/vibe. When we all started making music and putting the pieces together, it went really easily. Somehow we were in the same zone when we were all writing material, so it was pretty easy to put together when you look back at it. It went really smoothly. All the pieces found their place, like “This goes here now. Here’s this quiet part.” But it was different, and interesting also to do something like this. That was one of the reasons to do this in the first place – why we started doing it. We had already done six albums in a normal way, so we wanted to do something different.

Dead Rhetoric: I know that the album goes into more doom, black metal…stuff that like you said, you haven’t really touched upon in that sort of way before. Do you think it opened a door, not necessarily for doing another 40-minute song again, but to bring those influences into other songs next time around?

Dead Rhetoric: I know that the story was written like 10 years ago. Where did the idea come from to then wrap it into the music, other than say, just doing something different?

Sevänen: At that point, we were thinking that we wanted to do a long song. So we wanted to see how long it would be. At that point, I was thinking that it needed something bigger now – the drama has to last longer, so you need a bigger story. I remembered that I had this story that I had written. It won a short story competition 10 years ago. I told the guys that I had this story and asked if we should use it. They said okay, that sounded good. We got it translated into English and we showed it to the record company and they thought it was very cool and gave us the go ahead. Century Media was very supportive from the start. They could have thought, “Oh this is crazy. No no no. One song?” But they said, “Ok, let’s do this.” They believed in it from the beginning.

Dead Rhetoric: Do you do a lot of writing on the side, or is it something that you had more time for back then?

Sevänen: I try to do it. It’s like my other passion, besides writing music. I try to find time for it. Now that I quit my day job a little while ago, I hope that I will have more time to actually write something. When you are touring, it’s not going to happen. Your mentality is so different. It doesn’t work like, “Okay, you have one hour here now…write.” You need to have all the time you need – quiet, privacy, stuff that like. Then it will start coming, but when you are touring your brain is kind of numb all the time. A little from drinking maybe but also sleeping in the tour bus is different. But I’m going to try to find time for writing.

Dead Rhetoric: Insomnium has been a consistent band over the years. Do find it’s easier for fans to connect with? At this point, you aren’t going to veer off into a completely different direction.

Sevänen: Yeah, I think the fans trust that we will do something that sounds like Insomnium. Even if we want to do something new, like Winter’s Gate, it will still be an Insomnium album. I think consistency is key – fans know what to expect but we still try to bring something fresh to the table every time. It’s not like AC/DC doing the same thing. Of course, no one wants them to change – they are AC/DC. We try to get some new elements in there.

Dead Rhetoric: Insomnium has long been associated with melodic death metal. What’s your take on the state of that particular genre?

Sevänen: I don’t have much time to follow the new bands. I might hear a song once in a while. But the state of melodic death metal – I think that the ‘90s was the golden time. That’s when we found that style of music, and those records are dearest to me. But there are new bands doing good stuff. Most of them are Scandinavian I would say. Sweden, Finland – producing the best melodeath at the moment.

Dead Rhetoric: Melodic death metal got tagged early on, with Gothenburg. But Finland has been has kind of been there for a long time too. What do you accredit that to?

Sevänen: We had like Sentenced and Amorphis at the same time. It’s a bit different to the Gothenburg sound. All those bands came out of the same town, or close to it in Gothenburg, so it was easy to label it the ‘Gothenburg’ sound. In the music business, Sweden is much more influential than Finland. Metal is the only thing that we can compete with them in. But in like pop music and everything else, they are more influential globally. Like Abba, Roxette…you don’t know any artists like that from Finland. They are way ahead of us in that.

Dead Rhetoric: As we were saying, Insomnium is pretty consistent in sound. What do you feel defines Insomnium?

Sevänen: It’s the certain types of melodies that we have. A sense of melody, and the atmosphere. I feel that no other band is doing it exactly like us. You can say, okay it sounds a bit like thais or that, but I think we have found our own sound. The Insomnium sound. The melodies, the sorrowful atmosphere. It’s not happy music. There’s no happy riffs. We hate happy music [laughs]. But it’s hard to really nail down what it is. There’s also variety in our music. We like to do very long songs, and have catchy shorter ones.

Dead Rhetoric: I know you mentioned the headlining tour next year, but what are the rest of your plans? Is it too early to even consider writing again?

Sevänen: We are getting there. We have some schedules about when the next album should be recorded and released. There are a couple of demos, and songs in the making. So we are getting to that writing mode again. But you have to be home – we can’t do it on tour. Some bands maybe, but we can’t do it. I would say now, that the next album would come out in like, two years.