With all of the growing number of summer festivals, even here in the United States, it can be hard to stick out. But when you have your festival at the Ohio State Reformatory, the site of the film The Shawshank Redemption, it gives you some room to be different. In addition to this, the festival also focuses on tattoo artistry as much as it does music – a fine matchup for those fans of heavier music in general. With now one week to go before the second Inkcarceration Festival is to be held, we talked with one of the fests co-producers, Susan Fisher, to get some insight as to how something like this comes together from the ground up.

Dead Rhetoric: Where did the initial idea for the festival come from?

Susan Fisher: The Ohio State Reformatory had dabbled in this area, and they reached out to someone on my team and we pulled together a group of people who had been in music, production, food service, and marketing to make a core team to make it happen. We had folks in the music business who were able to contact the artists so that we could kick off last year with a pretty extraordinary first year line-up, and then we were off to the races?

Dead Rhetoric: What do you feel makes the festival stand out compared to some of the other summertime fests?

Fisher: We are festival people – we love it all. We love to go to everyone else’s [festival], as time allows. I think our approach has been that there are plenty of weekends in the year and plenty of festival fun to go around. We just wanted to create an experience that is special and unique to us. Inkcarceration is like no other festival that you can go to on the planet. It takes place on the grounds of a 100+ year old landmark prison yard, where one of the most famous films [The Shawshank Redemption] was made and where you can enjoy 30 bands over the course of 3 days and get a tour of all of the Shawshank memorabilia. We also have 70 tattoo artists from around the world, who do extraordinary art, and we get to showcase them with a competition. It’s just a trifecta – we are in a prison yard with rock music for three days and have tattoos in the background. We feel we have a pretty unique formula.

Dead Rhetoric: Given that this is the second time around, did you purposely change anything around or expand upon?

Fisher: We want to surprise and delight our fans with the best line-up every year, so that was the #1 focus this year – to make things bigger and better. So far by the response, we are quite pleased that everyone is looking forward to enjoying that. It’s going to be hot in July [laughs], so we have a whole new food truck city area with a big huge tent where people can enjoy some awesome, gourmet food truck food, have a beverage, and just get out of the sun for a little bit. Keeping everyone comfortable, honestly, is a big priority given how hot it always is the second week in July. We’ve got misting stations, hydration stations, relaxing areas, you can go inside the brick prison which is much cooler than outside, or you can just hang out in this cool new Inkcarceration blankets. You can find a spot of land and just chill and enjoy the sunshine and listen to the music.

Dead Rhetoric: Could you talk about the “Escape from Blood Prison” haunted house event.

Fisher: That is in partnership with the Ohio State Reformatory – it’s actually a feature that my friend, Vic Amesquita, puts on in the fall. We are basically bringing Halloween into July. Escape from Blood Prison will be one half of the cell block, with characters that are escaping. They are all dressed in character. You can get a ticket for this extra special feature – the tour of the prison is free with your Inkcarceration ticket, but Escape from Blood Prison is an extra feature. They do a few shows throughout the day, but when they are not in a show, they wander the festival and they can totally take you by surprise. They might tap you on the shoulder as you are getting a beer or something! They are frightful, I’m not going to lie [laughs]! They caught me off-guard a few times! It’s a pretty cool element. It adds a level of mystique. When you see zombies and people with half-blown off faces coming out of these prison cells. It’s pretty cool!

Dead Rhetoric: Could you discuss the money that was made for charities – is that something continuing this year?

Fisher: Absolutely – we’ve got partners throughout Mansfield, Ohio and Richland County, to even as far as Columbus and Cleveland, who are coming in and raising money for their charities. We have a number of good groups. That’s also a priority for us. It’s our way to sort of give back to the community. Our volunteers come in and get a free t-shirt, enjoy the music, and raise some money with their bar tips. Everyone remember to tip your bartender – the tips don’t go to the bartender, they go to charity.

Dead Rhetoric: Is it important that you are pushing the local aspect, particularly with the food available?

Fisher: I think the food trucks come from a bit of a wider area – some of them are local. The objective there was to really bring in a great mix of gourmet food truck foods. We’ve got a great guy, Chas Kaplan, who runs the food truck festival in Columbus who is coming up to manage it. He has helped us source some awesome food. We will have everyone’s favorite island noodles, Graeter’s ice cream, and there will be a great mix of types of home-grown food truck food.

Dead Rhetoric: How do you go about the selection of bands and tattoo artists?

Fisher: Both of them are a bit of a juggling match. From the band standpoint, we have our wishlist every year. That’s a matter of having the right price and getting the timing to align. If these bands are at Inkcarceration, they are on tour, which means you have to work around their tour schedule, but thankfully we have some that are working around us – we knew we were going to do year 2 early and the bands that came last year had a really good experience. Our phones starting ringing, which was a nice twist.

For the tattoo artists, the waiting list is long to get in. We wish we could accommodate everyone. There are obviously health standards that you have to meet. You can’t just put tattoo artists anywhere, so we have dedicated parts of the prison. It’s a very selective process, and my manager Mike’s area of expertise – he is covered head to toe in tattoos. I’m not sure how he decides – but it has to do with timing too, so get your paperwork in early! You have to be licensed and of course that sort of stuff. He sources the best of the best from around the country. I know he is getting a piece done by an artist from Florida to get Andy Dufresne on his forearm. He already has the Reformatory his shoulder. You have to admire that commitment!

At around 8PM every night, there are three judges and 10 categories, and the artists will show off and enter the competition to be best in show, best black and grey, or best color – categories like that. It’s a really fun aspect. The winners will be announced on the big stage, so it’s fun for everybody. Not everyone is into getting inked or having appointments done, but you can always appreciate a good artist. So we let everyone in on the experience by showing the winners to the crowd.

Dead Rhetoric: So is the competition done at night or something they do during the day and you just see the finished product?

Fisher: It’s right then. I don’t know how many contestants there are per category, but the artists will submit their best work. Let’s say they worked on a girl’s hip and it was a color piece, then they would submit into that category. There’s a crowd of 1000 people as the subject gets up there and shows off his or her art. The judges are right there – even if they are a little swollen still, they are judging live.

Dead Rhetoric: Was it validating to win the Tourism Award of Excellence?

Fisher: Yes – that was quite the honor, especially after just one year. Mansfield is a really beautiful and quaint town tucked between Cleveland and Columbus and there’s a lot of really cool stuff that goes on here. But Inkcarceration at the Ohio State Reformatory is probably the biggest weekend. It did a lot for the local hotels and restaurants, and we sourced a lot of local suppliers – whether it was port-a-johns or the generators needed for the stage. The tents where all put up by a local company. We are very conscious about the community we are in, and giving back the business. We don’t just bring in people from Cleveland or Columbus. Sometimes we have to, but we always source locally first if we can. So it was nice for them to recognize that. It was quite an honor.

Dead Rhetoric: What sort of behind the scenes legwork is necessary to get a festival of this size off the ground and running?

Fisher: You just go from 6AM or midnight and you have to think of the interactions with our guests every single step of the way. From when they plug in our parking lot into their GPS to when they arrive and how they are welcomed – there’s an incredible amount of details. Especially in a small town, just figuring out where everyone parks. We have campers at the Richland County Fairgrounds, so we have shuttles going back and forth all day long. I had a 2 hour meeting today to make sure that the bus was running on a good schedule with the best route. Getting the people back to their campsite as efficiently as possible. There’s a lot of operations and a lot of management. We are very focused on our collective team’s festival experience – we want to treat others the way we want to be treated as a festival. That’s our goal and guiding principle. We know that if we do that, we are going to do right by our festival guests. We think of everything and every detail, or at least we try to [laughs]! There’s always something that you don’t think of or doesn’t go quite right but we try to keep it to a minimum.

Dead Rhetoric: What are your long term goals for the fest?

Fisher: I think we see this as a staple of if you like rock music, build in a weekend in Mansfield at Inkcarceration into your summer plans. We hope to make the event better every year, and have it be something that people just look forward to as, “I don’t want to miss that.” That’s our dream state. It’s an event that you don’t want to miss. Being in that prison yard, surrounded by chain-link fence, with this ominous, gothic massive prison as a backdrop – it’s the coolest feeling. We just want to show everyone a good time, with the best music we can bring to Mansfield and make it into something everyone looks forward to year after year. 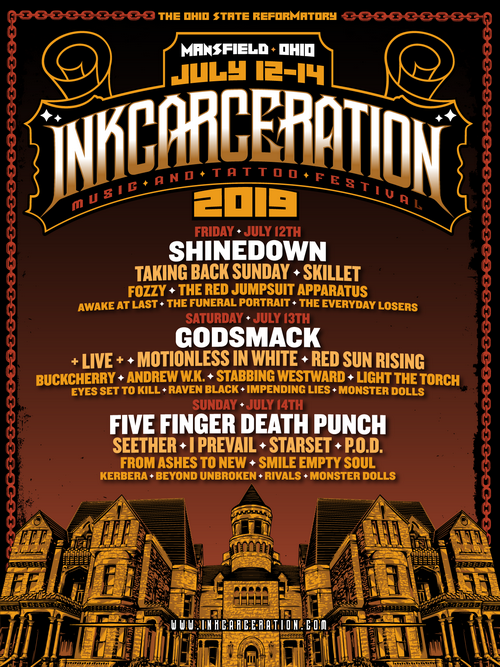