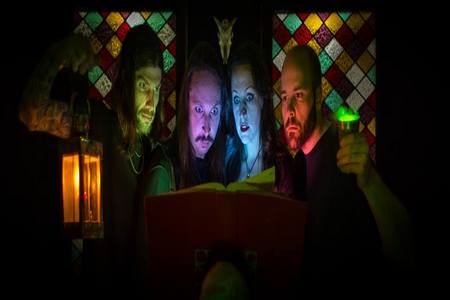 Fueling the fire for yesteryear, we have a new crop of artists who churn out stripped down metal that focuses on the almighty riffs and melodies that many turn to when hearing heavy metal for the first time. Inspired by the likes of 1970’s and 80’s artists like Black Sabbath, Judas Priest, and Iron Maiden – the universal style never seems to be passé.

Hailing from Portland, Maine, the quartet Hessian began in 2009 and benefit from not only a dual guitar attack, but also a twin vocal platform from a male and female perspective. Their debut album Bachelor of Black Arts contains a bevy of traditional tricks of the trade, and will motivate most who are looking to champion a new band who live for older, stripped down, in your face music. Shortly before heading out on a month long US tour, I fired off some questions to the band, and guitarist/vocalist Angus McFarland was very happy to answer.

Dead Rhetoric: Tell us about the early years of Hessian? Was it easy or difficult to assemble the right musicians, considering the type of old school occult rock/metal you play and your location in Portland, Maine?

Angus McFarland: (Guitarist/ vocalist) Salli (Wason) and I had played together before in a band called Hatchetface and the Vipers, and when that ended we decided to move on to the next thing together because we were both obsessed with old metal. We spent a few months learning riffs and leads from Thin Lizzy, Maiden, King Diamond, Raven, etc. together, until we felt like we had a handle on the sound we wanted. I had played with Mike Bryant in another band and knew he was on the same wavelength, so we brought him in on bass. Finding drummers has been a little trickier, but the first one that worked out was Zack Howard, who is really a guitarist, but had a kind of unique approach to the drums. He is the one playing on the Old, Wild, and Free EP. The cool thing about Portland is that there are a lot of great musicians and artists here for the population size, and if you have a project that is fresh and interesting you can find talented people who want to be a part of it relatively easily. Then of course you have to figure out who really works for the sound you want, and who is gonna work on a personal level.

Dead Rhetoric: In the summer of 2010 you released your first EP Old, Wild, and Free! What can you tell us about that recording session, how you felt about the songwriting, and are you still satisfied with this initial offering 4 years down the road?

McFarland: The recording session went really smoothly for that EP, we were really rehearsed and ready for it, and we had a little bit of an experimental mindset, having no concrete expectations about how it would sound. The material is very much representative of the stuff we were writing at the time, which was a little scattershot, because we were trying a lot of different sounds, as young bands should. Eventually you start to define yourself a little more, but a lot of the charm of demos and early recordings is in their lack of a worked out sound. But we did write “Cloven Lady” for that, and that one has stayed with us, it’s on the album. And I think that song really let us know where we wanted to go stylistically. I still love that EP, it sounds kind of amateurish to me now, but I love stuff like that.

Dead Rhetoric: The following year you did a split single with Natur, performing “Witch Road”. How did the offer come about, and was this a limited physical releases?

McFarland: After we made the EP we started talking with the dudes from Natur and trading demos. We played with them a few times in Portland and Brooklyn, and they have always been the best, just real classy dudes. And we were in love with their demo. So we were going down to New York to play with Pilgrim and Goreaphobia, and that day we cut the track in Natur’s practice space, with the Mexicutioner engineering. It was kind of a hard session, I’m not really sure why, but we didn’t get vocals recorded so we finished it back in Portland. It was released only physically on 7″ vinyl, very few copies were pressed, so they sold really fast. Right after that the label, The Year Is One, went down the tubes, so we never got it repressed or anything. A real collectors item!

Dead Rhetoric: From 2011-2014 you’ve been road warriors prior to the release of your debut album on Stormspell Records, Bachelor of Black Arts. What have been some of your favorite shows and places to play? Do you believe that your style of metal is on the upswing and allows you the chance to tour with a number of different acts?

McFarland: Yeah, we have always gigged really hard, if you have a good band but come from somewhere kind of remote like Portland it’s super important to play a lot, and far and wide as you can. At least that’s been our strategy. It is labor intensive, but it’s also what we love to do, so we are always happy to get on stage. As far as places go, the Acheron in Brooklyn had always been really good to us, they are huge supporters of underground music, and the best bar in the world is right next door, the Anchored Inn. Ralph’s in Worcester is also great, good stage, good sound, nice people, and the burgers are magnificent! And Geno’s in Portland, which is our home base. They’ve been at the center of Maine rock ‘n’ roll since the early 80s.

I’ve been playing there since I was 16. As far as our type of metal being on the upswing, I hope so! It’s hard to say, but I think a lot of people got sick of only hearing “extreme metal”, and it got boring, so now they are much more open to music that has some rock ‘n’ roll in it, and that’s great. We’ve been really lucky in finding like-minded bands to play with, like Seax, Natur, Blood of Kings, etc. Bands that are focused on being great bands, and good to listen to, rather than trying to strike an avant-garde artistic pose. Not that I hate arty music, or extreme music, but it just got so dogmatic and silly, I’m glad the crust is broken!

Dead Rhetoric: You’ve been through a revolving door of drummers through the years, what seemed to be the major issue for their lack of staying power, and what makes Tim Webber different from the rest? Can you let us know a little more about your latest acquisition in bassist Dann Rich?

McFarland: I think it has never been one particular issue, but we work hard at what we do and it is a lot of commitment. So you have to be good at balancing your life with Hessian, and finding a way to make them work together. And you have to know that being a musician is what your life is about. Tim is a musician to the core. He wants, I think, to play with people who have some drive to accomplish something, as he does, and not just play the same three venues in the same town once a month forever. That’s easy to do in Portland, but if you want to go further you are gonna have to put in some time. Dann joined us this year, after Mike left. We (Angus and Dann) play together in another band Eastern Spell, which is sort of doom. So I knew he was the man for the job, and we couldn’t be happier with him. We are very excited to write the next album with him.

Dead Rhetoric: Bachelor of Black Arts is a 10 song effort, including a mixture of material from all facets of Hessian’s career. Was there a particular game plan as far as what made the record, are you careful/thoughtful regarding song order and what were some of the highlights/memories regarding this recording?

McFarland: We actually recorded this album twice, the first one lies on the scrap heap. We didn’t love the sound we ended up with the first time around, so we had to go back and start over. It was a really hard thing to do, but it was the right decision in the long run, because now we have an album that is really representative of what we do. The songs span our whole career so far, we wrote three new ones after we had recorded the first time, so we switched those for some older material that wasn’t working as well. So it’s really the best material from a pretty long span of time. We tried to be careful to make it work like an album, so that it would have that flow that a great album has, that mixture of variety and unity, you know?

We recorded it at PigCat recording, which is a studio run by Tim and his brother, so it allowed us to define the sound ourselves and do everything our way, which was great. Everything was recorded live except vocals and lead doubling, and we used the approach of mic-ing the room really carefully, so almost nothing is close mic-ed. We wanted the listener to feel like they were in the room with us. Also the thunderstorm sounds before and after “Witch Road” are real, we hung a mic out of the window during a thunderstorm. 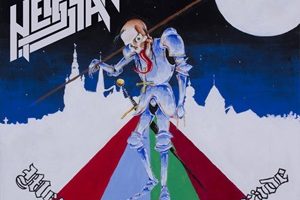 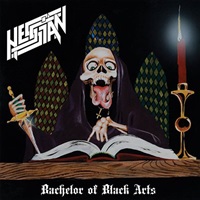