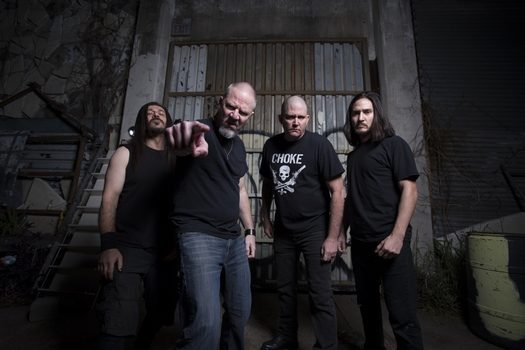 Obviously a name like Heavy as Texas implies there’s going to be some dense guitars and weight to the sound. But what you might expect is the diversity that comes to play over the 8 tracks that makes up the band’s self-titled debut. A bit of southern groove couples with some jazz and blues influences to make each track stand apart from the rest. Add in the talent of guitarist Marzi Montazeri and vocalist Kyle Thomas (who also play together in Exhorder), Anup Sastry (Marty Friedman), and Chris Collier (Korn, Prong) to the recording, and the potential increases even further. We took a few minutes to chat with Kyle Thomas to discuss how Heavy as Texas came to be, the sound of their debut, and some of his thoughts about his musical career in general.

Dead Rhetoric: How did Heavy as Texas come to be? What inspired the name?

Kyle Thomas: That’s more of Marzi [Montazeri] thing – he actually had Heavy as Texas before I was in the picture. At one point, I believe it was actually called Marzi Montazeri’s Heavy as Texas. Then he scaled it back to Heavy as Texas, I believe his intent was to make it be less of a feature of him and more of a band. Although he’s originally from Persia, he has grown up most of his life in Houston, Texas. I believe he was 8-9 years old when he moved there. So he considers himself to be quite the Texan.

Dead Rhetoric: Youv’e been involved in a number of bands over the years? What’s exciting about starting a new project/band?

Thomas: It’s kind of like when you are a teenager and you start talking to a new love interest. You get that honeymoon-type newness to a relationship. It’s not that much different than playing with a new group of people in a band. That excitement of creating with people with a completely new chemistry. That’s not to say that doesn’t bleed over with people that you have worked with for a long time. But it is a special quality of playing in a band [newness] – it doesn’t last for long. The more you work together you get familiar with each other. Over time it becomes second nature. It’s great when you have a brand new thing over, and the potential is there. Going into the unknown – how far will it go? Where will it take us? That’s very exciting as well.

Dead Rhetoric: What can people expect to hear when they listen to Heavy as Texas?

Thomas: We’ve got 8 songs on the album. It’s not a very long album at all – it’s a little over a ½ hour. It’s that old school, early ‘80s/late ‘70s approach to making an album rather than the early ‘90s when everyone was releasing 48-55 minute albums. It’s geared more to the short attention span that people today have in the streaming world. A lot of times, people don’t even listen to albums anymore start to finish. They find select songs and listen to them and that’s it. We purposely wrote 8 songs that are very different from each other. They each have their own unique personality, or personality-disorders [laughs], whatever you would like to say about them.

Dead Rhetoric: That in mind, what can you say about the collective sounds that the band has – going from groovy to heavy to bluesy/jazzy?

Thomas: A comparison that I have made for it when people ask what it sounds like is that I jokingly say it sounds like Van Halen on meth. It has that four to the floor: guitar, bass, drums, singer approach. It’s straight rock, but like you said, there’s a whole lot of musicality about it. There’s bluesy and jazzy type stuff, there’s a punk edge at some points, and heavy metal as well. It’s songs that we would want to listen to I guess. Life imitates art, so we just kind of pour it out on our sleeve and leave it there for everyone to see.

Dead Rhetoric: What do you feel makes you and Marzi work well as a team?

Thomas: When I first was approached by Marzi about doing any sort of work, it was quite a few years before we recorded the album. He had been working on the music for a number of years. Some of these songs I think are a bit old, in the sense that they weren’t written in the last year or so. We had actually met in New Orleans at a festival that we both played. We rekindled our friendship through Facebook and really kind of got to know each other through joking around. We have a similar sense of humor and he’s a family man like me. We share common values of how we look upon humanity and etc.

We really clicked a lot on the personal level, and he invited me up to learn a handful of the songs – we had never even rehearsed, we played an opening slot with Anthrax and Death Angel a few years ago. We kicked out a 30-minute set and really enjoyed it. It was evident there that we were feeling that we should work together, and actually create together. I love him, he’s one of the best friends I’ll ever have for sure.

Dead Rhetoric: In addition to Heavy as Texas and Exhorder, you’ve been in Trouble and Alabama Thunderpussy. What have you learned from these collective experiences?

Thomas: That bands are fragile as much as they are steamrollers at times. It’s really tough to have a group of artists get together and everyone be able to get along for an extended period of time, or to see eye to eye on how to create. Sometimes people are interesting animals – sometimes you might work great with someone and not be able to get along at all, or you might get along really well with someone and you have some baggage relating to them being in a band…or they are just not that good. It happens sometimes. The chemistry and magic that you find in something, where bands stay together 30-40 years is almost unheard of. Rush, for instance, even though Neal Peart wasn’t the original drummer, that trio worked together, and worked together well and successfully for a hundred years it seems. But that’s the exception to the rule and doesn’t happen often.

Bands have revolving doors, and sometimes the fans have a hard time accepting that. They fall in love with a certain time period or album of a band and when the band doesn’t have the line-up, I think people get territorial and possessive about the music that they love. They don’t understand why these people don’t work together anymore. It might just be that they don’t even like each other, or that together, they are bad for each other. Or there might be a guy or girl in the band that has a lifestyle that is not conducive to living on the road – raising families or whatever. Sometimes people just lose interest in playing. I can’t tell you how many musicians I have met over the years that just can’t stand to go out on the road anymore – they won’t do it.

Dead Rhetoric: How has heavy metal shaped your life to this point?

Thomas: That’s an interesting question because from the time I was 11 or 12 until I was in my mid/late 20s it was extremely important to my day to day life. I listened to it extensively. Over the years, other things crept in like punk rock or folk and classic rock – but to be honest I don’t listen to it much anymore. But being that I play it so much, it’s almost the last thing I want to hear. You’ll find a lot of musicians do that. They tend to shy away from whatever genre they play, not just heavy metal. But I guess, at the end of the day, it’s what I have become known for, so I’ll always love it and what it has brought to me. In the end it has brought more joy than misery, and it’s brought plenty of misery [laughs]. I have to say, pound for pound I wouldn’t change anything with my relationship with metal.

Dead Rhetoric: Do you still have goals that you’d like to see accomplished in music?

Thomas: Yeah, just having been in and out of the door as a full-timer for most of my life, I would love to get to the point where it’s my one and only source of income. That would be fantastic. That’s just a grown up kind of thing to say I suppose. But if I did that, it would free me up with more time to create instead of having to work odd jobs here and there to make ends meet. A lot of times I will work, then I will get home and need to write but I don’t feel like writing because my creativity is zapped. If I could be full time and have home recording equipment, I would do nothing but writing.

I would love to get to that point, because I have got two other albums on the backburner with Trouble, and the Devil’s Highway project that never were finished. I also have a solo record that is in the wings too that I haven’t gotten around to doing. When you are a writer, music is always on your mind. You wake up in the middle of the night and you can’t go back to sleep because you are hearing it. If I just had the time, I would have a lot more music written and recorded.

Dead Rhetoric: You mentioned the solo project, is that something that would veer outside of metal as well?

Thomas: Yeah, I’m sure. It would probably be more or less rock elements, New Orleans style elements, and perhaps even some punk elements to it. I’ve really thought about making albums – you know how when Queen made records they would have a real hard rock anthem and the next song would be a vaudeville type song, and the album progresses in such a way. Bands like Led Zeppelin did that too. I would like to have that diversity in an album, where there is no guarantee of what is coming next, and it could almost be shocking at times.

Dead Rhetoric: Any progress on getting a new Exhorder record made?

Thomas: We are actually in the studio right now recording a new album. I’m actually sitting outside of the door and as soon as I’m done talking with you I’m going to do some vocal tracking. It’s fun times, there’s a lot going on right now.

Dead Rhetoric: What’s on deck once Heavy as Texas is released?

Thomas: We’ve got a game plan to get out and support it and play live. We have a management team working on the dynamics of that, and we have already released one video. I’m going to Houston to go film two more videos. We will pop a few lyric videos as well. We are going to put most of the album out there for people to stream and get the word out. In this day and age, that’s how it’s done. Of course, it’s for sale for whoever wants to buy it, but we just really want to be heard right now. It’s difficult to start a band in this era.

Dead Rhetoric: It’s crazy nowadays that you put most of the album online just in hopes that someone will want to buy it.

Thomas: It’s a different world for sure. I can remember being a teenager and would go to the store and buy it. I’d listen to it over and over again and I’d read all the liner notes while I was listening. When the album finished I would put it on again.