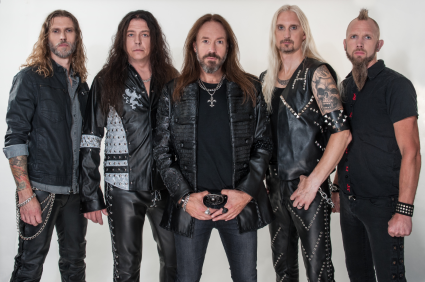 Dead Rhetoric: Who have been some of the most important people in the metal scene that you’ve met in person and kind of pick their brains for particular words of wisdom and advice about the music business through the years? And what has been the best piece of advice you’ve received?

Dronjak: I don’t think I’ve ever done that. We’ve gotten help from people in the business a lot, but I never really saw it as that, at least back then. For me it was a roller coaster ride that we were on and enjoying it. From after the Wacken show that we talked about, we went on tour with Gamma Ray, and that was very important for us. Kai Hansen sort of hand picked us to do this tour, and it was a brilliant strategy for him. We brought people to the shows, and we got a lot of experience and a great start. We met their booking agency All Access from Germany, and the two guys who ran the agency AC and Jörg. They have been with us ever since- AC was a former drummer of Running Wild, I believe he played in the band in the early 1990’s. They were the most important people in our career, outside of our record label. I don’t think we’ve picked any musician’s brain to be honest. We always did things our way, whatever worked for others may not have worked for us anyway.

Dead Rhetoric: What would you have done differently in your 20’s and 30’s now with the knowledge and experience that you have in your mid 40’s?

Dronjak: Yes, probably. In a way, no. What I would have liked to have done more was – we wasted a lot of money on some of the tours that we did for Europe on stage production. I never took into account that we actually have to make some money to make this go around. We did not get to keep a lot of the money that we generated because it went back into the production- that’s something I would have thought about looking into a bit earlier. We shouldn’t waste money on this, we could have used it more wisely. Only in the last few years are these things that I’ve had to really think about, especially having a family and responsibilities. One thing I always thought about is I wish I had treated the tours more like a job instead of stress-less and always responsibility free. I never cared about anything when I was on tour- that’s why I always loved being on tour. Maybe if I had thought a little bit more about why we are doing this show, is there a way we can do it better? Some things we could have done it better to sort of protect the brand name of Hammerfall. That’s much more recent thinking in the last 5-10 years- as it was never a case during the end of the 1990’s.

Dead Rhetoric: How do you view the heavy metal scene today? Are there many newer bands that impress you, or do you feel that a lot of the veterans are still able to teach the new generation a thing or two regarding recording great albums and putting on memorable live performances?

Dronjak: That’s a very difficult question to answer. I’m not really into the scene that much, and haven’t been for many years. There are certain bands that I like, we are going to bring one of them on the road with us in Europe in January- it’s a young Swedish band called Lancer. Their new album is coming out pretty soon – they love the Hammerfall, Edguy, Stratovarius sort of music- but they are getting into their own style. For me it feels really good to bring guys like that out on tour- I know they have been fans of Hammerfall for a long time but they are still very young guys. It feels great to be able to do for them what Kai Hansen was able to do for us. Give them an opportunity to be seen and heard, all over Europe- it feels even better.

Dead Rhetoric: After the release of the album, you’ll be doing a headlining tour of Europe and plan on doing a co-headlining North American tour with Delain for the spring of 2017. What can the fans expect in terms of setlists, staging, and the live show?

Dronjak: You are right, it’s very tough, and it’s getting more and more difficult to decide a set list with each album that comes out. We just have to… there are certain songs that we have to play, and certain songs from the new album as well. You try to fill that out with stuff that you like and that you want to play that you think other fans want to hear. It’s a very difficult balance between the old and the new. I’m not too worried, we’ve started talking about this. There are some songs that we haven’t played in a while that we think are going to go over very well, because I think if anything the last tour that we did showed to us that people come to Hammerfall at least in Europe (we don’t know about America because we haven’t been there in seven years), people know what to expect. They can expect a Hammerfall show and they seem to enjoy every part of it. So I’m not worried that they won’t like the songs. Which is a great feeling, that this will not be a problem.

Dead Rhetoric: Knowing that you are a big wrestling fan, what is your favorite era of wrestling to watch?

Dronjak: The Attitude Era of the WWE. I grew up in the 80’s, but wrestling in Sweden, nobody knew about it and it was laughed at. You know this is not real, right? That attitude kept things down in Sweden for 15 years, longer than anywhere else. So for me when I got into wrestling heavily was in Texas. I got to see the WWE live in Nashville, Tennessee in 2000 with the Rock, Stone Cold Steve Austin, and it was very, very cool.