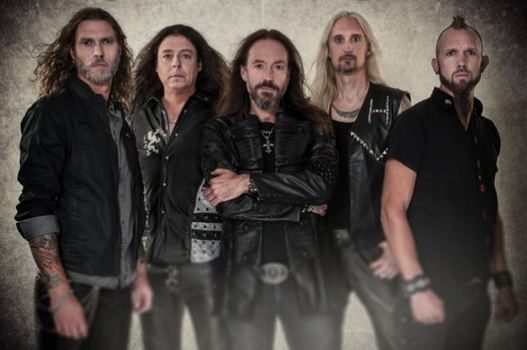 Dead Rhetoric: Are there plans down the road for the Swedish biography you penned Legenden Em Hammerfall to possibly gain more of an international release?

Oscar Dronjak: I wish. At some point it will, for sure. I’m having a hard time convincing the publisher that it’s worth it. They don’t see that investment. I wrote the book because I wanted it to be read- and I didn’t want to make money off of it, I wanted people to hear the story. It’s difficult for people to hear the story if they don’t understand the language. Right now it’s only available in Swedish and I get this question a lot in interviews- at least English and German too would be nice, because that’s our biggest market, there are so many German speaking people in Europe. The biography ended in 2013 I think, up until then. Since then I’ve taken notes just to keep things going in case there will be a translation I will have more stuff to put in there to make it more contemporary.

Dead Rhetoric: When looking at the discography, live tours, and festival appearances for the band, what are some particular standout moments that will forever be embedded in your brain and body where you knew you were making an important impact on your audience and the scene?

Dronjak: There are a couple. The first time playing in our small city I grew up in of 500,000 people. We have an ice hockey arena here (Scandinavium), and I don’t know how many bands I got to see growing up there, as well as ice hockey which I was a huge fan of being from Sweden. The first time we played there ourselves in 2005, and it was a pretty big gamble because we didn’t know if enough people were going to come and see us to make it worth our while. It turned out to be a fantastic idea, and we were the first Swedish metal band to play there since Europe. We played there last year for the fourth time, and we’ve played at this place more than any other place in Gothenburg, which makes me very, very proud. Being on that stage where you have witnessed your idols play, it’s a very cool thing. A year later we played the European championships in athletics. We performed this song in front of 100,000 people outside in our hometown, and millions of people watching on television- and that I will always remember. I never thought I would ever do this. Often when we look at the pre-sales for a particular show and they aren’t going that well, sometimes as a musician you think this is going to suck- invariably it turns around to be a great show. It helps you think that yes, I am doing the right thing with my life.

Dead Rhetoric: During my years video trading, I remember getting the very first Wacken Open Air festival appearance you did after Glory to the Brave came out- and how people were excited to know that something was going on that was special for this group. But you may not have necessarily felt that this was the best performance, correct?

Dronjak: Yes, that was back then I had no clue. That was the first show outside of Sweden that we ever did. We had done a handful of shows- it was a huge deal, but we didn’t know what was wrong with our show, or how we were supposed to act. I think that this show in retrospect was really good from an energetic side, but if you look at us now, it’s two completely different bands. If you look back at all the mistakes that we made, it’s not really that fun anymore.

Dead Rhetoric: How important do you believe social media and the internet has been to maintaining presence for the band on a global scale? Are you conscious of balancing your use of it with fostering in person, face to face relationships?

Dronjak: It’s always been difficult. When I was growing up, it was always difficult to get close to any bands. The only time you got the chance to see them was on stage and maybe if you knew what hotel they were staying at, you would see them go from their cars to the hotel lobby. Nowadays all you have to do is go online, send a message to somebody and they might answer you back. So I think that social media is very helpful to the awareness of people, but it’s also like a double-edged sword. Nobody likes to hear negative feedback, and it’s not a problem if it’s constructive negative feedback but if it’s ‘this album sucks’… there’s no point in bothering with people like that. If you can get some people that discuss hearing the first heavy metal album that they ever bought, I love to read about this. It makes me very proud. I’ve always felt that heavy metal has gotten a very bad reputation from music by people who never understood what it really is about. For me heavy metal stood for power, energy, great melodies, something that makes you feel very alive. I think a lot of people who initially might have thought ‘oh, loud guitars- I don’t want to hear it’, if they gave it a chance, they might like it. So when people say they’ve discovered heavy metal with us, and then moved on to other bands, it makes me feel very proud.

Dead Rhetoric: I remember reading a previous interview you did on Heavyworlds.com regarding the extra percentage fees that venues and countries put on your merchandise for the right to sell at your own shows. How do these practices come into play – considering the bands front the costs to make the product in the first place?

Dronjak: Yeah, I don’t know how it started. It began a long time ago, in the bigger venues- and now it’s starting to creep into the smaller places. It’s really messed up, this business. I can understand if they want a cut of the gross. If they are selling the merchandise, because sometimes you are forced to use people in the venue as merchandisers, and there’s nothing you can do about it. There’s no way around it. If these venues decide, for them it’s just a way of making more money. For a band, it could be the difference between a profitable tour and a loss if you do this a lot. Merchandise sales are now more than ever very important. It’s not a fair practice- they haven’t done anything to come up with the merchandise, anything to print it or manufacture it, they haven’t done anything to transport it. All they do is sell it and take a percentage of the profit- if they took from the gross, then that wouldn’t be as much of an issue. But they take from the profit and that’s what angers me. It’s a sicken practice that unfortunately I don’t see an end to. Bands end up having to change the price for certain venues to reflect the commissions, and that really sucks.