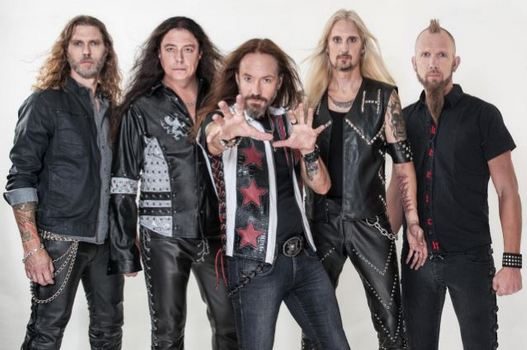 After the metal heydays of the 1980’s when major media coverage boomed and audiences filled arena-level venues, the plummet the following decade would be swift and severe – at least for the United States. Often relying on mail order companies or record stores to import your favorite bands, a lot of major acts were getting dropped – or couldn’t even get any prime touring opportunities. But just as something goes away, the return can be that much more glorious as nostalgia creeps back in. During the late 1990’s, one of the newer groups to bring traditional, power metal back on the radar would be Sweden’s Hammerfall.

It’s hard to deny the impact of their 1997 debut album Glory to the Brave and the follow up Legacy of Kings – selling in the hundreds of thousands worldwide, gaining album of the year praise from prominent European press outlets, and allowing the band to ascend to headline / upper bill status quickly at prestigious festivals like Sweden Rock and Wacken Open Air. After 23 years as a band, we have a tenth studio album in Built to Last that pumps out those anthems that resonate to the current generation like Judas Priest and Accept once did for the previous one.

Taking the opportunity to have a Skype interview with guitarist Oscar Dronjak, you will find that the focus for Hammerfall is still strong – as well as an understanding of what they are all about: power, steel, warriors for the faith. Prepare to learn more about the loss of veteran drummer Anders Johansson, their new record deal with Napalm, the importance to Hammerfall of imagery and stage presence, plus a little discussion about the music business – in this very intriguing talk. And hopefully they will be able to gain more of a foothold in North America as they trek once again here in the spring 2017 on a co-headlining tour with Delain.

Dead Rhetoric: Was it a shock to lose long-time drummer Anders Johansson in 2014 after the release of your last album (r)Evolution, and have you found a permanent replacement or are you still using temporary/ fill-in members until you are satisfied with the right member for Hammerfall?

Oscar Dronjak: It was a huge shock, and a huge disappointment initially too, because he didn’t say anything to us. He didn’t even notify us when it happened. We found out from our booking agency, actually. They wrote us an e-mail saying that ‘well, since Anders is no longer going to be touring these next shows, we need a name to be able to start securing the plane tickets and visas – who is your new drummer?’ And we were like, ‘wait- what are you saying’? It’s a typical Anders way of doing things, and it felt weird. It was the end of the relationship- it felt like being dumped by your girlfriend after 15 years without her telling you why, basically. To this day I still don’t know why it happened, because I haven’t spoken to him. I’ve gotten some texts and stuff.

What I think happened is he saw the touring plans that we had- he has been touring since the early 1980’s, he’s 10 years older than I am and he’s done this for a long, long time. He was tired of touring the same cities over and over again. I just think he was tired of the grind – he didn’t want to go through this again. He has a new family- at that point he had a son that was two years old, and also another on the way. That played a role for him too, being away from the family for a while. I can respect and understand that totally- I just wish he would have told me in person, but that was what happened.

So we got David (Wallin) afterwards, that was a blessing in disguise that Anders took this step because David has invigorated the band quite a bit. He’s four years younger than I am, it’s not much but with the attitude he has he hasn’t done a lot of big stuff. To have David on board has been a big shot in the arm for everybody else, especially live. The gigs have been much more energetic since he’s appeared with the band. I think we sound better than we ever have.

Dead Rhetoric: Did you ever imagine at the start of Hammerfall’s career that we would be talking about a group with a 23 year plus history now promoting your tenth studio album Built to Last? What do you think are the keys to your longevity?

Dronjak: To answer the first part- there was no way in hell that we thought this would ever go anywhere. When I formed the band in 1993, metal was something that people spit on basically, melodic metal the way that we did things was a genre that people wouldn’t touch with a ten-foot pole. We were laughed at quite a bit, doing shows and stuff, they would ask us if we knew that the 80’s ended a few years ago. That sort of attitude. We always said that it doesn’t matter- we are not doing this to become rich and famous because it would be insane to do that in the 1990’s. We were doing this because we love it- there was never any other motive other than that.

We released our first album in 1997, and we thought if it sells a couple of thousand copies worldwide, then we will be happy. The height of our dreams at that point, because that’s what we thought was realistic. And then, all of a sudden, we found ourselves on a roller coaster, just running away with us in it. And now we sit here twenty years later and this is incredible.

The second part of your question is a little bit interesting because I think this ties into what I was saying before- we did this because we love the music and we are fans of heavy metal. We have been fans of heavy metal since we were kids, and still are to this day. We have a vision of how Hammerfall is supposed to sound- this is a type of band that we are, there was never any identity crisis ever in Hammerfall or should we go in this direction musically. We always wrote the songs that we wanted to hear ourselves. We also had a lifetime of heavy metal experience, even though it was as fans. We had a vast knowledge of the genre, so that has a lot to do with why we were able to stay relevant for such a long period of time. I guess it comes back to the fact that we love what we do- and if you love what you do, and you do it well, it’s going to last for a while.

Dead Rhetoric: How did the songwriting and recording sessions go for the new record? Were there any particular surprises or challenges that had to be worked through, and is recording a pleasurable or stressful experience at this point?

Dronjak: (laughs). The songwriting process for this album was exactly the same as any other album. I write most of the music, I make a demo with the drum machine, my guitars and bass- I also put on some melodies if I have them, maybe a chorus or whatever vocal melodies I have. Then I send that demo over to Joacim, he finishes the rest of the vocal melodies and the lyrics, so that’s how we work. Almost all the songs are done this way over the years, and it works out very, very well for us. We both feel comfortable working this way. This time though was a little bit different- we normally have a six-month period where we write songs, and that’s all we do. This time I didn’t have that luxury because we were doing tours every month throughout that whole period. Normally when I write songs I want to be home, calm and relaxed. That’s when I do the best stuff- if all I’m thinking about is songwriting, I can really put all that I have into it- but if I have to think about going on stage tonight, I would never be able to write a good song on the road. It’s just not how I want to do things.

I need to be able to go to the studio, work on the song- go to lunch, still thinking about the song, work out a little bit, pick up my son from daycare still thinking about the song. Maybe have a shower later still thinking about it. But I didn’t have as much an opportunity to do that this time- which made for a more stressful environment. So I was not enjoying the songwriting process as much as I normally do, but I’ve been doing this for a long time so I can trust my gut feeling. Instead of savoring the moment, when the song was finished I would start working on the next one. That’s where things got a little bit rough, but now I know I can trust my gut feelings and it will all work out. We managed to meet the deadline, and that’s all that matters.

This record was recorded in the same way as the last record, (r)Evolution. We did the drums, guitars, and bass in my studio called Castle Black Studios- and then we went Los Angeles to record the vocals together with James Michael. And then we did the mixing with Fredrik Nordström at his studio, and he was also a producer with the guitars- but he wasn’t there on a day to day basis. The result turned out really good, because it felt familiar. My studio is in a building next to my house, and it makes things easier for me. As far as enjoying recording, I don’t think I’ve ever enjoyed recording very much. I like creating and enjoy looking at the result, but the actual recording is not much fun. Because there is a lot of performance aspects, and you have to do this and that. I have to say it’s not my favorite part of being a musician but it has to be done. There’s no greater feeling when you are done- I would have to say this is probably a part of any art form, if you put the work in and you get the result you want then it’s so satisfying in the end. That makes everything worth it.