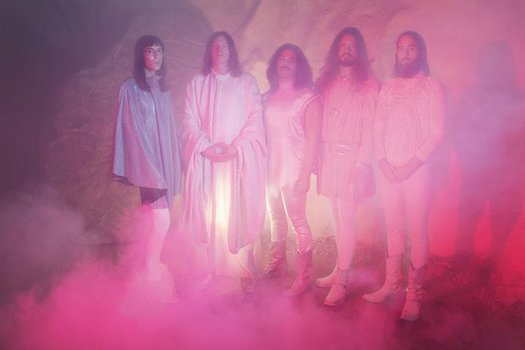 Few and far between is the band that can actually describe their music in a way that makes it simple to grasp what they are doing. But Hallas quickly developed the term ‘adventure rock’ and it’s an exceptional fit. Their mix of retro ‘70s (and ‘80s when it comes to the band’s latest, Conundrum) vibes is done in such a way that it sweeps you into a sci-fi/fantasy land that is full of excitement, and well, adventure. With Conundrum set to be released on Napalm Records this week (pre-order HERE), we spoke with drummer Kasper Eriksson to dive into some of the details of the band’s sound, art and sound connections, and what music should do for the listener.

Dead Rhetoric: What makes Conundrum stand out to you?

Kasper Eriksson: In comparison to our other stuff, it’s a bit different. The production is completely new, but still has the essence that makes Hallas what it is. I guess we used more synthesizers, which are special for our kind of music. I think what makes us special is our way of making songs according to a certain concept. We tried to make the music unpredictable in a way. That’s at least what we tried to do [laughs].

Dead Rhetoric: Do you feel that Conundrum brings in some influences that feel more ‘80s than ‘70s, particularly with the synthesizers?

Eriksson: We don’t lock ourselves to certain eras, we just try to make it the way we want the album to sound. We had access to a lot of cool synthesizers, so we used them. I had also bought myself some early ‘80s analog synthesizer drums, so we used those too. It’s just fun to play around I suppose. We like ‘80s music as much as ‘70s music, or at least I do, and it’s just fun.

Dead Rhetoric: This is the third in a trilogy. How does it feel to finish up a conceptual trilogy of records?

Eriksson: We hadn’t planned this for a long time, to do a trilogy. It just sort of happened. When we wrote the EP, we just did four different songs, and the last song has the same concept as the Excerpts from a Future Past album. It didn’t feel like Excerpts from a Future Past had a proper ending to the story, so we decided to write this third piece. So it felt more spontaneous in a way.

Dead Rhetoric: So does this wrap up that concept and you will try something completely new next time, or have you not thought that far ahead yet?

Eriksson: We haven’t really made any proper decisions yet, but I think we will probably do something entirely new, when it comes to the storyline at least. We won’t do ‘90s music, I promise you that [laughs]!

Eriksson: Yeah, we’ll do a grunge album about drugs or something [laughs]. Nah, that won’t happen.

Dead Rhetoric: One thing that I really like is the cover art that Hallas has had. Do you feel that the cover art should link with the music?

Eriksson: Yeah, for sure. For me, it’s a big part of the music – all the visuals in a way. Everything we release, every physical thing: a t-shirt, an album, or just a poster. I think it’s important that you can link that to our music and what the songs are about. It would make no sense if we had a soccer ball on fire, or a motorcycle on the cover. I think it should be on the same line as what our songs are about. It’s important to us to have connected visuals to our stuff.

Dead Rhetoric: It gives it that added layer of polish to it.

Eriksson: The same thing with our live show. We tried to work according to our concept there too, but it’s more expensive when it comes to stage shows. But at least we have a proper backdrop and some weird outfits [laughs]. That should be enough for now.

Dead Rhetoric: How important is the overall ‘sound’ of your music to you? Meaning the way that it is recorded…

Eriksson: We aren’t that picky – we want it to sound good, according to ourselves. But we aren’t using only old, analog stuff. We make it in a way that we are comfortable. As long as we are cool with the result, it’s fine. But of course, it’s important in a way because it would make no sense if it sounded like a modern pop song. The production is important, and I think Nicklas [Malmqvist], our organist, who mixes the albums – he’s doing a really good job. We are all happy with the results so far.

Dead Rhetoric: It doesn’t feel like it’s completely stuck in that retro sound, which is a benefit for Hallas. There’s a lot of bands doing this that fall into that trap.

Eriksson: As I said earlier, we don’t want to lock ourselves into something that will make it harder for us. If we do something live, it would be a shitty sounding album [laughs].

Dead Rhetoric: In terms of ‘adventure rock’ – what should listening to an album do for you?

Eriksson: I like to be surprised when I listen to music. Everyone could link our music to bands like, Hawkwind for example. It’s ‘70s and full of synthesizers. But Hawkwind doesn’t do anything for me when I listen to it, because it’s the same at the start of each song. I want to be surprised and want things to happen. Not all the time of course – if I wanted to listen to soft music or ballads, I don’t expect weird parts or transitions. But when it comes to rock music, I want to be entertained in a way.

Dead Rhetoric: So what do you feel is the role of the drums in that piece?

Eriksson: Tough one! I’m just doing my best I suppose. I try to be unique; I know it sounds a bit pretentious, but I try not to sound like everyone else in a way. As long as it is possible for me, technically. I also want to be inventive, but not too weird either because the music needs to be listenable. I try to do my best and try to be a unique player in certain parts.

Dead Rhetoric: You have had two releases so far, and in certain parts of the world you can listen to Conundrum already. What made you decide to join up with Napalm Records for this record?

Eriksson: It was actually a choice that came from our Swedish label. They released the album in Scandinavia, RMV, and they felt like they wanted to work together with another label for the worldwide release. They had some offers from different labels, but we all felt like Napalm was the best. We got in touch with them and everything felt great. We haven’t been in touch for a long time, but they have been planning some stuff together. They seem like a great bunch of people and I look forward to working with them in the future.

Dead Rhetoric: Do you feel that the band is at that cusp, where you are ready for a bigger push to get that international fanbase increased?

Eriksson: Yeah, of course. We never expected anything from this band. In the beginning, it was just a hobby in a way. When we released the first full-length album, we felt like maybe some people would like to see us play live and that people were actually listening to our songs. Everything from that point is a bonus. But at the same time, we want to do this for as long as we can. It’s still fun, we are still really good friends. It’s fun to play together, and we want to do it as much as we can, and do it as far away from home as we can. We want to go to places that we haven’t been before. We are ready!

Dead Rhetoric: What got you into playing this type of rock music, in general?

Eriksson: For me, it’s been an interest that has been with me since I was a child. I started playing drums at 15, but the music interest has been with me since I was 5 or 6. I was looking at my parents’ old records, so of course you had a childhood dream to be a rock musician. I got a drum set when I was 15 and have been trying to do my best since. Hallas is actually my first band, so it’s a nice start.

Dead Rhetoric: With not wanting to stuck with any labels or anything, do you have any aspirations as to how far you can take Hallas’ sound?

Eriksson: For me, I think where we are now is perfect. I rarely listen to music released after 1985, so where we are now fits my tastes pretty well. We could decide to do heavier or softer music, we could change that way. But we wouldn’t do like a ‘50s rock and roll album [laughs]. You never know, but I don’t think so.

Dead Rhetoric: What’s planned for the band for the rest of the year?

Eriksson: Right now we are in the middle of a Scandinavian tour. We have been doing shows in Sweden, Norway, and Denmark on the weekends now. After that, we are going to Finland for a small tour, and then to the European continent for a three week tour. Then we are hoping to get some bigger festivals from the world after that. We’ll see; the latter part of the year is still open, so we’ll see what we can do.