Goatwhore – Sworn to the Blood Oath 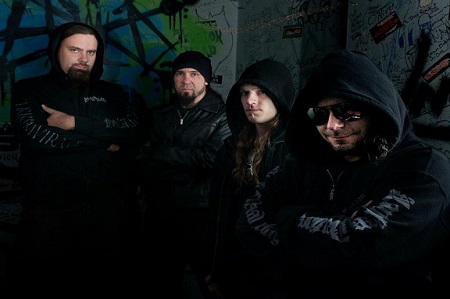 Ben Falgoust can talk and talk a lot. The Bayou-bred frontman has every reason to be talkative both on the phone and in lyrical form, for you, his trials and tribulations are many, so there’s a story to be told. Whether it’s about Goatwhore, or the multiple life-threatening van accidents he’s had the misfortune of taking part in, Falgoust isn’t afraid to let his very friendly Southern drawl carry his weighty words. Dude should think about writing a book, something we asked if he thought of doing, but the Falgoust doesn’t want to go down that path…

Blood for the Master is the band’s new album and fifth overall and might be the first Goatwhore album where everything fell into place. It’s a vehement combination of black metal, thrash, and classic metal, all rolled into a relentless presentation. Where once the band’s songs had a tendency to wonder off into barren Bayou BM, there’s this pointed aggression that is vicious enough to intimidate other bands. It’s definitely the band’s finest hour, something we quipped to Falgoust when our conversation started, but the frontman wasn’t as quick for a nomination.

“What we did was write for ourselves, and write music that we enjoyed playing with the influences we all share,” he begins. “I don’t ever want to say our new record is our best because we could be wrong about it. I have to say that we’re really happy with a lot of things about this record…the performances from Sammy [Duet, guitars], Zach [Simmons, drums] and James [Harvey, bass] were awesome. When you’re playing the songs in rehearsal, they don’t always come across the same way in the studio. You can’t really control it…writing in itself is a unique thing, and you’re always influenced by what’s going with you at that particular point in time, including what you’re listening to.”

The Goatwhore “sound” at this juncture is instantly identifiable, and wasn’t until 2009’s Carving out the Eyes of God that the band made significant strides in their songwriting. According to Falgoust, the mindset was simple: Keep getting better. “Either you evolve or you don’t, and I think Goatwhore from each record to the next, there’s been an evolution. We’re really aware that we’re honing in on our sound, but of course you can hear the things we’re into like Motorhead, and Celtic Frost, old thrash metal…all sorts of heavy metal styles, the list goes on and on.”

“When we wrapped up the touring cycle for the last album, we had reached a point where we played every single song off Carving Out the Eyes of God,” he continues. “We’ve never did that before with Goatwhore, and I guess that’s one of the main things here is that every song on the new record has a really good live feel to it. So when we hit the next touring cycle, hopefully we’ll be able to swap songs as we go along and play every song off the new album.”

The blackened thrash riffs doled out by guitarist Sammy Duet are among his finest (see: “Death to the Architects of Heaven,” “An End to Nothing,” and “In Deathless Tradition”), and is one of the main reasons why Blood for the Masteris such a stormer. Getting there, of course, is an entirely different story. “At beginning of the writing process for every album, he runs into a wall,” Falgoust relays. “Sometimes it’s not flowing out, so there has been some times where we’ve been at practice standing around for a couple of hours and nothing is coming out. You don’t want to get into that mode where something forced, so we decided to call it a night, come back in the next few days with something new. We’ll let you take the next four days off and come in with new stuff.”

Per Falgoust, keeping the riffs fresh and interesting was also a point emphasis, even in this over-crowded scene. “That’s the thing with metal now – there’s so many bands that are coming that I think people are only getting caught up now realizing how much of a back catalog there is. I think we’re at the point now where we can go back to Iron Maiden and Judas Priest, Motorhead, all of those. Then we can go from that point, to where black metal got started, into death metal, and then thrash metal. Then we can start blending those…what happens is when we put together the riffs, there’s certain freshness to it. We’re coming in from a different angle than most. Not necessarily with riffs that are now, but from a different angle.”

Predispositions of the Goatwhore name have been longstanding. It’s one of the more imitable names in underground metal, long the product of one of the band’s friends describing a New Orleans’ stripper with an ill-fitting face. Back story aside, the last few years have worked wonders for Goatwhore in building their name, including a run on 2010’s Ozzfest.

“I think people aren’t sure what to make of us on these tours,” admits Falgoust. “You’re not going to please everyone. They automatically have this idea of the band to the point of being ignorant. We went out with one black metal band, and I can’t remember the name, but the one guys came up to me and said, ‘You know, what I have to admit, I’ve never listened to your band and I thought you were more of a mainstream band. You’re not anything like that.’ That proves a point right there. Sometimes people get in an idea in their heads just because of our name. Then also you have people who saw us when we first started out, then later on, caught us when Carving came out and during that cycle, they started to like us. So you have variations of it.”

Falgoust’s injuries have piled up over the years, the result of two separate van accidents that threatened not only his well-being, but his life. Yet, the man’s fortitude is stronger than most, returning to normal after doctors told him that walking simply wasn’t a possibility. When posed the question if there ever was a time when he thought of packing in his musical career (including his other band Soilent Green), Falgoust was quite defiant.

“It always a goal of mine to keep going,” he concludes. “I wanted to get back on my feet. There’s two directions you can go: Wallow in self-pity, or get up, dust yourself off and go forward. When you’re in the hospital, you’re exposed to all the bad. They don’t lead you in a positive direction. At that moment, you have to tell yourself to make something out of it. At one point, I was told I wasn’t even going to be able to walk again. So you have that running in your head, and it’s like, ‘If I have to be in a wheelchair for the rest of my life, I’ll sort it out.’ In the meantime, I will try to walk and try to get out of this thing. That’s another thing: I was in a van when it happened. A lot of people wouldn’t get back in the van. But I was like, ‘I’m going to confront this.’ It happened. I had no control over it. Why not get on with your life? Knock on wood, there could be a third accident, but things happen. Things turn out oddly. “