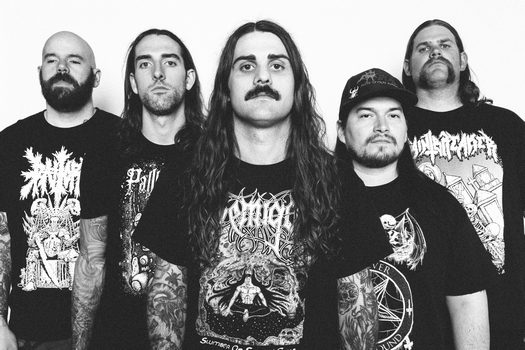 Among the old school death metal elite, one band that has rightly been catching some buzz is that of Arizona’s Gatecreeper. Perhaps it’s the way that they blend said material along with some other aspects of extreme metal (like doom or melodies), or maybe it’s just because the songs themselves sound quite righteous. No matter your take, there’s no denying that Gatecreeper have been able to get themselves into a foothold with their take on death metal. With their most recent album, Deserted, recently being released, we had a chat with vocalist Chase Mason about the band’s success, the HM-2 sound, and what makes them stand out.

Dead Rhetoric: Have you been surprised by the band’s surge in success over the last few years?

Chase Mason: No, I wouldn’t say surprised. I think it’s really cool, and I’m really excited about it. But I’m pretty confident in what we do. I’m not surprised that people like it, because I think that it’s good [laughs]. I think that a lot of people who are in bands – there’s a lot of false humility. It’s not necessary. There’s a difference between being arrogant and confidence. Somewhere along the line, with social media or whatever, it became looked down on to say that something looks cool, or that you are proud of something.

Now it’s like, “Well, I made something, and I hope that you like it.” What’s the point of doing this if I don’t think the music that I make is cool. I want to make the music that I like, and hopefully other people like it. To answer your question, I’m glad that other people like it too. It’s very validating. We put in a lot of work, and it wasn’t really an overnight [success]. So when you are putting in the work, it’s not really surprising when you start to see results. I think everyone is hoping that is what will happen with their band.

Dead Rhetoric: That’s cool. I like that – people are sometimes hesitant to be proud of what they have done, so it’s refreshing to hear someone be truly positive about what they are doing.

Mason: I think it’s just real. The false humility stuff – I don’t think it’s genuine. I can’t relate to it. I feel like it would be a waste to do something that you aren’t proud of. It’s like a social pressure to not be too confident, because people will think you are an asshole. But you can be confident without being an asshole. At least I try [laughs].

Dead Rhetoric: How do you feel that Deserted expands or betters your debut?

Mason: We definitely incorporated some new elements in, but nothing too extreme as far as what we have done in the past. Overall, we have just gotten better and improved as a band. It’s like a better, or enhanced, version of anything we have ever done. The focus, and the fundamentals/blueprint for it is the same. You can make a million different dishes with a few ingredients depending on how it’s done.

I think the ingredients that we have had, like the doom parts, they have been there, but there is some more pronounced parts. Things like the more melodic parts or guitar leads – we tried to level up on them. We definitely did some more of that on this record. I think that anyone who liked the last record is going to like this one. But I think that since we have improved on things, if someone didn’t like it last time they could give it a chance and see the difference we have made and maybe like this one.

Dead Rhetoric: What can you speak to of the cover art for Deserted?

Mason: The artist is Brad Moore. He started doing album art again more recently. He’s done some comic book stuff as well. He’s a very interesting guy. It was cool to work with him – we worked together for about six months on that album cover. Before we even started recording the record, I was talking to him and doing sketches. I wanted it to be an actual painting.

As far as death metal, I’m not a purist by any means, but I think there are some standards that I tried to [stick] to. I think that for a death metal record, it should have a painting on it. Like those Dan Seagrave covers. If you look at the classic death metal records, they are all very colorful paintings. I felt we needed someone to do that, and it took a while to find someone. But we already had the album title, Deserted, selected. I gave him some pretty vague direction of what we wanted, and let him do his thing with a little direction throughout the process. I think it looks really cool.

Dead Rhetoric: You’ve done a number of splits with other bands since the band’s inception. What do think works best about them?

Mason: For us, it has always been an opportunity to get new music out between records and stay active. It’s a way to crossover – we did a split with Iron Reagan. That came about because we toured with them and became friends. We were both on Relapse, so we kicked around the idea of doing a split even though we weren’t really similar bands. So for that, it was an opportunity to release something with our friends, and also because if someone hadn’t heard of our band but like Iron Reagan, then maybe they will listen and become a fan as well. I think that’s the idea for most splits – to cross over into the audience of the other band, and ally yourself with other bands.

Dead Rhetoric: How important is the guitar tone and sound to a band playing this sort of death metal?

Mason: The HM-2, that Swedish death metal tone, is a big part of the Gatecreeper sound. I think it’s very specific. When you are into extreme music, it can be broken down into so many subgenres, and sub-subgenres, even within death metal. There’s so many different types of death metal. If you don’t like metal at all and you hear some it sounds the same. But once you get really into it, there are so many differences between death and black and thrash metal. It’s a very nerdy thing, admittedly I nerd out about it. I think for us, it’s a very important part [HM-2].

The guitar tone sounds great, but it kind of annoyed me because that sound kind of came back and when we first started, so we would be written off as an HM-2 band. I think that our music is way more than that guitar tone. It can be dismissive to anything else that’s not that guitar tone. So I think it’s an important part of our sound, but it doesn’t define us as a band.

Dead Rhetoric: What do you feel you gain by being a part of both Gatecreeper and Spirit Adrift?

Mason: Again, it’s the same sort of thing. Subgenre-wise they are very different. They are both under the umbrella of metal, but it’s different flavors. Gatecreeper is more of my creative responsibility. I only do vocals live, but I still write about half of the music on guitar. But for Spirit Adrift, I am just playing. I don’t write any of the music or play on the records. So as a musician, it’s a different mode. For Gatecreeper, I am playing and creating it. It’s a more imaginative process. For Spirit Adrift, it’s a more mechanical thing. I get to go and play. I find it exciting for both sides. It’s also bound to bleed over a little bit.

In playing with Spirit Adrift for a few years, with the new Gatecreeper stuff, whether consciously or not, I feel some of that has bled into the Gatecreeper songwriting. It’s bound to happen. Playing Spirit Adrift songs that I didn’t write – learning to play it has expanded my musical toolbox. In that way, they have influenced each other, but they are definitely very different. They are like different modes that I can go back and forth on.

Dead Rhetoric: With more old school death metal bands becoming en vogue, what do you feel you need to do to stand out as a band? What has helped Gatecreeper to veer further from that, and establish yourselves as more unique?

Mason: For us being unique, as far as currently in the wave of bands right now and the resurgence of the old school death metal style, we are certainly in a generation of bands. A lot of our peers, and bands that we have played with in the last few years, we have consciously tried to do something a little different than those bands. We aren’t a technical or progressive band. We aren’t trying to do anything that has never been done before. There’s that self-awareness that we aren’t trying to reinvent the wheel. Like I said at the very beginning, we are just making what we like. The influences are very obvious – we like Obituary, Swedish death metal, Bolt Thrower. But then we mix some other stuff into it like Crowbar and the doom stuff.

Adding that stuff in makes us more unique compared to some of our peers. I think that wave of old school death metal stuff that’s popular is done in a little bit of a different style than we do. It’s a little bit more blurry sounding. We don’t have any blast beats. We focus more on the mid-tempo stuff. A lot of the current stuff is more focused on the vibe – eerie and evil sounding. More stuff like Incantation or Immolation. For us, it’s not death ‘n’ roll, but we write songs in a standard rock song structure. There’s a verse and a chorus and a bridge. I don’t many bands in this generation are doing it like that. I might be wrong, but it’s a bit of a different approach. It’s no slight to any other band. I love what is coming out, and a lot of the new death metal bands. But I wanted us to do something a little bit different. We have hooks, and choruses, and parts that we come back to rather than the linear songs that just have one riff after another. I want our songs to be memorable.

Even the tag, old school death metal, is pretty broad. You can go from the demo-death metal/Incantation stuff to what we do, to Carcass’ Heartwork, or Obituary’s World Demise. There’s a bit of a different time frame for it, but it’s still old school, just with some different batch of songwriting goals and influences.

Dead Rhetoric: What’s next for the band? I know there’s a tour with Exhumed coming up.

Mason: We are just going to tour for the next few years I’m sure. We’ll see what happens. Hopefully we will continue to grow and stay on an upward trajectory. I’m not sure what that looks like, but we aren’t afraid to take new opportunities and we want to do this for a living, and we already are. As opposed to some philosophies in underground metal, where they want to stay underground. I want to take this band as far as we can do it. I definitely don’t want to compromise what we are doing, but if there is opportunity for us because of what we are doing, we are going to see how far we can take it. It’s kind of like a game. 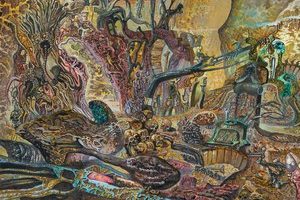 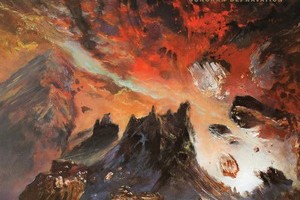