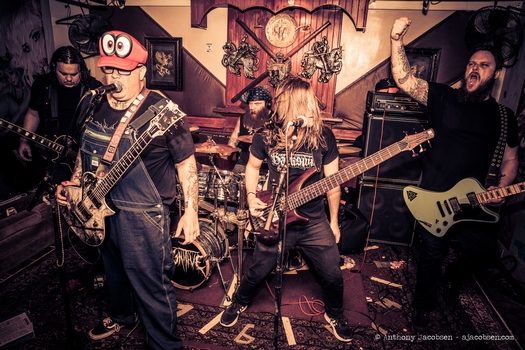 Pennsylvania probably isn’t your first guess when you hear a sound that’s folk influenced, with a European sense of grandeur. Yet a rising crop of these bands are slowly popping up across North America, and they aren’t content to simply retread what Europe has succeeded in. Frost Giant are the latest example of an American act that can stand hip-to-hip with Europe’s folkish hordes, while providing a fresh twist to keep things fresh.

Frost Giant recently released their first full-length album, The Harlot Star. After a few smaller releases over the years, their time focusing on the craft has paid off with a stellar release. Glorious folky melodies with a strong sense of sincerity alongside heavy riffing and booming drums with a sly nod to punk and hardcore provide the needed leverage to take the band to the next level. Vocalist/guitarist Matti Frost gave us a few minutes of his time to catch us up to speed on The Harlot Star, love of fantasy, and line-up changes.

Dead Rhetoric: What has the band been up to in the years between 2014’s Silver Dagger and The Harlot Star?

Matti Frost: We had originally planned on taking a short break over the fall of 2014 but it ended up being extremely prolonged. Life just did that thing and got in the way. We all kept productive in our own areas. I continued to write and demo mew material and work on The Harlot Star. I had surgery and changed jobs. Our drummer took up a full time position playing on cruise ships with Big Band jazz groups. The rest of the band formed an Iron Maiden tribute band called Tailgunner and kept busy.

We came back together and recorded the album, and then we had more lineup changes. It’s hard to go 2 1/2 years being inactive and expect folks to want to stay put. Scott Breustedt (guitar) is the last of the original members besides myself. The first half of 2017 was spent recording the new album and the latter half getting ready for release and rehearsing with the new lineup.

Dead Rhetoric: What do you feel defines The Harlot Star?

Frost: Balance. I strove to write an album that had as much balance as I could possibly create, and the more things you add the more difficult it is to find balance. What helped is that this album was written sporadically over a very long time, about seven years. The last couple songs I wrote for it were “The Forgotten Graves” and “Of Clarity and Regret.” I don’t think I could have written those in 2011 when I was still goofing off with Adele and 7 Seconds covers. Within the music I tried to create contrast and conflict, and bring them together with symmetry and harmony. Harsh and soft, light and dark, heavy and uplifting, masculine and feminine. My favorite albums all have that sense of balance, and that’s what I was looking to create.

Dead Rhetoric: Given the spread of influences on the album, do you feel it separates you from more of the ‘folk’ crowd?

Frost: I think if by ‘folk’ you mean the standard medieval type of music that is commonly integrated into European folk metal then yes, the spread of influences may separate us somewhat. However, as much as I love that style of folk music and love metal that plays off of and into that, I also have to say that broadly speaking, folk music is not limited to flutes, mandolins, whistles, dulcimers, or the hurdy-gurdy. Punk and hardcore are forms of folk music. They are music of, by, and for the common folk. At least it started that way and in many parts of the music underground, continues and thrives that way. It’s what I feel very connected to when I write.

Dead Rhetoric: The band has been described as ‘Heathen Hardcore.’ Do you feel that’s an accurate representation of Frost Giant?

Frost: That’s a phrase I came up with when we did our first round of stickers a long time ago and it just kept. Our earlier music seems to have more of a hardcore vibe than The Harlot Star does. On the new album it’s a bit more subtle. I don’t think any two word phrase can really define a band’s aesthetic, though. I think it fits us, but I’m probably not out there pushing it much as a label or descriptor.

Dead Rhetoric: As stated on your Facebook page, could you explain the role of ‘general silliness’ in the band?

Frost: It’s pretty much all musical. Like covering Adele or Peter Schilling, or taking a 7 Seconds song and making it all death metal, or having an acapella song with finger snaps following a throat-ripping black metal scream-fest and then following that with a humpaa-style romp with kazoos, xylophones, and accordion and then diving into an absurdly heavy blast-beat laden song. There’s some visual stuff too, like how I dress onstage which isn’t a stretch from my everyday attire, or the claymation video for “Prisoner of the Past.”

Dead Rhetoric: How did the deal come about with Transcending Records?

Frost: Luck. When we finished the album we were not sure if we wanted to submit it to labels or self-release. A friend of mine sent me a link to Transcending Records, who were looking for bands with completed recordings to release for late 2017/early 2018. We said, what the hell, and sent Mike Ramirez the album and video for “Prisoner.” He liked it, we talked back and forth, we clicked on many levels, he offered us a contract and we signed it. We pick out curtains next month.

Dead Rhetoric: You released a very cool video for “Prisoner of the Past” last year. Could you tell us a little bit more about its inception?

Frost: Scott’s former roommate Bruce Longo offered to make a claymation video for us right around the time we went in the studio. We saw his work on his Instagram (@headlesseyesclaymation) and the video he did for the Goddamned Gallows. Plus he was offering to do it for free, which is awesome. Claymation takes a really long time to do especially if it’s only done during your free time, so it took about 5 months for it to get done, but it was well worth it. He did a fantastic job, creating a visual story that really draws in the viewer. The music is almost secondary to the video, but it looks and plays great.

Dead Rhetoric: There has been some turn-over with band members. Do you feel you have reached a stable line-up?

Frost: Almost. As I mentioned, Scott and I are the only two members from the first full lineup. It’s been hard finding people who have both the skill and the desire to play this. We recently parted ways with guitarist Ty Asoudegan, who we were lucky to have during the recording. He laid down some unbelievable solos and gave the songs he played on an amazing sense of dimension that wasn’t there previously, but at the end of the day, he had other things he wanted to do more. It’s okay, if it’s not meant to be then it isn’t meant to be. I think Brook Duer (bass) and Armen Koroghlian (drums) have a pretty strong connection to the music, which hopefully will grow as we continue to bond as bandmates.

Dead Rhetoric: Norse mythology appeals to a wide swath of metal fans. What draws you to it, from a personal standpoint?

Frost: In all the mythology I’ve studied and read about, it is the Norse mythology that has held my interest and sense of wonder the most. It goes back years with me to when I first began playing Dungeons & Dragons and first discovered the stories and the gods & goddesses. I was a good Christian boy back then but when I began reading about Thor and Freya and Odin, I was like, wow, these gods are way cooler than Jesus. Christ didn’t ride an eight-legged steed and carry a badass spear, and when Odin hung on a tree he didn’t die, he gained knowledge and wisdom. Keep in mind I was 12 or so here… The Eddas and Sagas were more interesting to me than the Bible stories I was raised with.

I can’t think of just one thing, really, that drew me towards that. I didn’t even know there was a reconstructed religion until I was 30 and I’ve had my issues with ‘religion’. But there is still a lot of wisdom and great storytelling in that mythology, lots of things that have echoed with me for a very long time, so I tend to use it somewhat in my own storytelling.

Dead Rhetoric: Could you talk about the band’s enjoyment of fantasy as a genre, and its impact on Frost Giant?

Frost: Sure. Going back to my childhood, I was fortunate enough to have a dad who loved fantasy movies and science fiction and a mother who loved to read. She taught me how to read and in turn, I was devouring Stephen King books when I was 9 years old while my dad was bringing me to see Star Wars and Conan the Barbarian around the same time. HBO was kind of a new thing then too, so it was pretty easy to jimmy a cable box and get it for free. I must have seen Beastmaster like 40 times. I began reading straight fantasy books in my early teens. Dragonlance was my favorite, and I have the Solamnic Oath tattooed on my chest.

I got into Katharine Kerr sometime in the mid-1990’s and she became my favorite fantasy author. Silver Dagger is directly referencing characters in her Deverry series, which I highly recommend. Fantasy, mythology, history, and books in general regardless of genre have just constantly pushed me to expand and explore my own imagination, which in turn drives my creative process when I pick up a guitar or write lyrics.

Dead Rhetoric: What are your thoughts on the Philadelphia metal scene?

Frost: It’s the strongest I’ve ever seen it. There are so many great bands from here and close by. When I walk the halls of the building we practice in, I am treated to a cavalcade of incredible music. It’s such a vibrant community filled with tons of amazing people, and there isn’t any jock bullshit competition like I’ve experienced in other areas in the past. Everyone here is just doing their thing and is happy for others when they do well. It’s just a great vibe all around.

Dead Rhetoric: What will 2018 bring for Frost Giant, outside of the release of The Harlot Star?

Frost: We would like to play out more and possibly tour, maybe even head over to Europe. I don’t know if that will happen this year but if the right opportunity arises we would take it. Aside of that, I’m not sure what to expect, so I’m just going to enjoy the ride and take the opportunities as they present themselves. 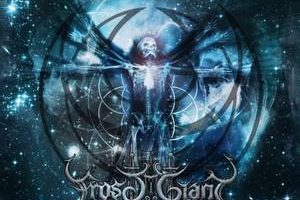