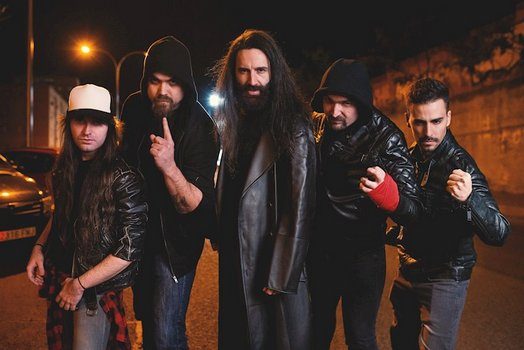 We all have our reasons for joining the coven of metal. Escapism, rebellion, the need to belong and to feel understood – the gateway to this music could be infinite and endless as we delve into the culture. Combining a love of comic book heroes and music, Frenzy embrace a spirit of traditional heavy metal with fiery guitar action and high octane, melodic vocals. Gaining this scribe’s attention through their recently released full-length Blind Justice, it’s obvious that the band stand on similar ground as Iron Maiden, Judas Priest, Riot, and a host of NWOBHM/ melodic hard rock acts.

Wanting to learn more behind this quintet of musicians we fired off some questions to bassist Angel Muñoz Corcuera (aka Choco), and he was happy to let us know about the early formation of the group – the progress they’ve made through their debut album, and thoughts on social media, crowdfunding, plus plans to get more touring under their belts.

Dead Rhetoric: Tell us about the origins of Frenzy in 2015 – how did the initial formation come to be, and did you agree on right away the style of heavy metal you wanted to play, or was it a feeling out process to get to the Frenzy style you currently embrace?

Choco: Frenzy started after Steel Horse split up, and consisted of Anthony, our former drummer Ruben, and myself. As we were both personally and musically on the same page, we decided to start a heavy metal band with US elements, but with an overall style that wasn’t exactly linear. We believed that most bands were choosing to play speed metal exclusively, NWOBHM, hard rock – we wanted to write songs like our favorite bands did, without thinking something might be too ‘hard rock-ish’ or too ‘thrash’. That’s how we ended up with an album that we felt was varied enough with songs ranging from the hard rock elements of “Save Me” or “Mad Ball” to the straight to hell power metal of “Velocity”.

Dead Rhetoric: Your first EP Lethal Protector came out in 2016 – how do you believe the recording sessions went for this release? What are your memories surrounding the release, and did you receive a lot of fan / media support?

Choco: The studio sessions for Lethal Protector went really fast — I remember we didn’t even have many of the lyrics done when we started recording. The release was quite successful here in Spain. We quickly got a lot of offers to play, and sold all of our copies really fast. We were also lucky enough to get the attention of some great European festivals like Harder Than Steel, Heavy Sound Festival, Heavy Metal Maniacs… which was a really nice surprise considering it was our first EP. We are really grateful for all the support received.

Dead Rhetoric: You’ve had the opportunity to play across your home country Spain and also play for some special metal festivals already. How would you describe Frenzy in a live situation, what do you hope to get across and what have been some of the best memories of Frenzy gigs either in a club situation or for the festivals you’ve played?

Choco: One of the most important sides for us is making the audience a part of the show. We will ask you to scream, raise your fist and bang your head! That’s what heavy metal is about after all — having a good time banging your head and screaming out loud. I don’t like bands that stand still there like they are giving a master class at a music university.

Dead Rhetoric: Blind Justice is the latest Frenzy album – where do you see the differences between your first release and this full-length? Do you believe that you’ve grown as songwriters and understand how to put things across better in the studio?

Choco: Definitely, with the full-length album we wanted to work slower and write 15 new tracks to record and choose from. We wrote a lot of material, recorded demos and chose our favorites from there. The whole situation was more calculated and planned. We paid much more attention to melodies and lyrics, even rewriting full parts from there. I think we really pushed ourselves harder to achieve better songs and not just riffing, shredding and screaming (laughs).

Choco: When we started writing the first lyrics our former drummer Ruben and myself were reading a lot of comics, we were in that mood and started to share ideas about characters and how well they would translate into a heavy metal song. There is something so dramatic and epic in comics that really connects to the ‘larger Than life’ spirit of heavy metal that Tom Allom talked about.

Some of them are based on the feelings we think someone like Silver Surfer had when he tried to help humans and all he got was rejection. Others are more connected to the real world like “We Are the Future”, which is about the feeling of being different in a world where everything and everyone are invariably catapulting towards uniformity. “We Are the Future” is as much about mutants as it is about metalheads feeling proud of what makes them different.

Dead Rhetoric: What do you consider some of the biggest challenges to overcome in moving Frenzy up the ranks in terms of a bigger following and hopefully making a career off of your music endeavors?

Choco: We are working hard on the tour to visit most of the European countries, as well as we will try to visit the US, the road is where you really get a lot of new fans. There will be more videos and merch to promote the album. But answering the second part and to be honest, I’ve been in the music business long enough to know our kind of metal is probably not a way to earn a living in 2019. I am a professional musician, but not because of metal. Would I love that? Of course. But for now, I just try to make my favorite music, enjoy playing it, and to get all of the great feedback from the fans. Of course, getting extra income is nice, but we don’t think we will be leaving our day jobs any time soon.

Dead Rhetoric: How do you feel about the domestic Spain metal scene – do you believe there is a lot of support from venues, promoters, fans, labels, and the bands themselves? Who are some recommendations that people should look into?

Choco: The Spanish metal scene has traditionally been locally focused with Spanish lyrics. Over the last ten years there’s been a change, and a lot of bands have embraced English and started playing outside of the country. I think my old band Steel Horse and Iron Curtain were good examples of that. People should definitely check Iron Curtain, Hitten, Witchtower, Leather Heart, Lizzies, Omission, Misty Grey, Tottenwolf…

Dead Rhetoric: What are your thoughts on social media and crowdfunding when it comes to Frenzy activities? How do you split activities within the band when it comes to administrative/business aspects versus what needs to be done musically?

Choco: Social media is really important to make your music reach out to people and let them know what you are up to, though I don’t really like ultra-communicative bands as a fan. I prefer to just read the important stuff, not about your last haircut. Regarding crowdfunding… we haven’t opted for that, first of all I own the recording studio where we made the album and could finance the recording until it’s out, also the EP worked well enough to give us some money to invest and keep going and that’s what we expect to keep doing in the future. I prefer to ask the fans to pay for a concert or an album they have listened to, instead of for a promise. But I understand sometimes you need some extra economic support and I think it’s cool.

In the music we work together all time, we rehearse weekly. In the administrative we rely on Anthony and I to keep things up to date and running smoothly.

Dead Rhetoric: What concerns or worries do you have about the world that we live in today? What areas do you think the leaders need to focus on to make the world a better, safer, and healthier place for future generations to treasure?

Choco: Promotion rules are not talking about politics, right? But I will skip that here and say that alt-right movements are a concern… especially when they altogether deny reality. I have friends in all kind of political positions and I can sympathize with all of them in many things… but this new type of politics is a danger, as they are just playing with lies and fear.

I’m also very interested in ecologist movements and trying to sustain this amazing planet we have. In our little music world, I wish the industry would abandon plastic sealing on records. Or on vinyl specifically — why not deliver them in the classic plastic sleeve to keep the album in good shape like our label does.

Dead Rhetoric: What would you say are the three most important metal bands in your personal record collection that you could never live without? And what are some of your favorite personal concert memories that you’ve had in heavy metal, just as a fan?

One of my best memories as a fan/organizer was working with Manilla Road the first time they came to Spain. They were here for several days before the show and we went to visit Segovia, at lunch I saw them talking to Neudi, their German drummer about some beginnings and connections between songs as they had been days without playing a full set together, so I invited them to come to rehearse at my studio and they were playing a lot of my favorite tracks there with my equipment, I felt honored. Their concert the next day was probably my favorite Manilla Road concert ever, so much emotion and connection. I have some really nice memories from those days.

This summer I was at Headbangers Open Air festival when Mark did his last show before passing away. Those were two very special days, Mark will be missed as a great musician and a very special person, many people have special stories and feelings for him and it’s a sign of how extraordinary he was.

Dead Rhetoric: How do you see the next twelve months going for Frenzy activities as far as shows, tours, festivals, promotion, etc.? Has work already begun on the follow-up release – and are you content to stay on Underground Power Records or will you seek out a new opportunity if it presents itself?

Choco: This year is starting excellent at the Frenzy headquarters. We’ve already booked shows in The Netherlands, all over Spain, and we’re planning a European tour with Hitten, so we will be busy! While the album was getting finished, we started writing songs for the next release — of course we believe it will be again on Underground Power Records. It’s a great label we call our home, Helmut has become a friend over the last few years, and we really like him. 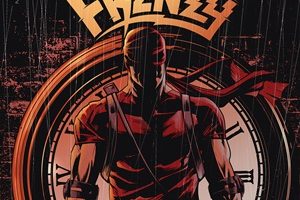