Flotsam and Jetsam – Doomsday Is Near 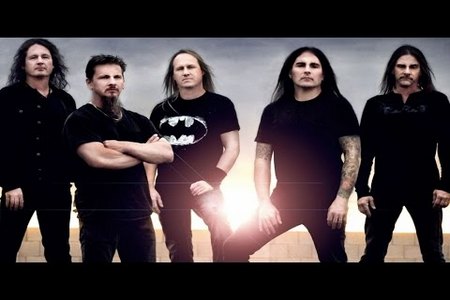 Dead Rhetoric: For the new album you went with AFM Records, where with the last couple of records you did the crowd funding campaigns. Was there any particular reason why you decided to go back to a label situation?

Eric AK: They had a really good offer for us. Not huge dollar wise, but they had a really good marketing plan set up. We knew they were offering us a little bit more than what anyone else was going to offer us, we are really excited and we wanted this to happen. That means a lot when somebody has their heart into it and is willing to help us push this thing bigger. That’s where we went and it’s been awesome so far.

Dead Rhetoric: Often you’ve explored history topics in your lyrics- has that always been an interest of yours?

Eric AK: We are not fanatics or anything, but we used to talk about history and topics like Hitler. A lot of times when we write songs about stuff it happens to be on television when I sit down to write. You never know where it comes from, but we are big fans of history and stories.

Dead Rhetoric: Do younger musicians ever ask your advice about navigating the music business, and if so what sorts of topics do you have them think about and discuss?

Eric AK: Younger musicians are the same as back when I was their age. Everybody wants somebody to come along and say they are the greatest thing on the planet, here’s a trillion dollars and I’m going to take care of your career for you. That’s what they all really want. I do have some friends that are in the business and in younger bands that call me up for advice once in a while. I’m certainly glad to give it- I’ve done a lot of things wrong and I can tell them what not to do- and that’s something for them.

Dead Rhetoric: You’ll be doing an extensive tour of Europe in the fall with Destruction, Enforcer, and Nervosa – do you prefer these diverse packages in terms of offering value for the fans?

Eric AK: You know, I’ve done a couple of tours where there was 3-4 different types of metal bands together. And it turns out really good- nobody gets bored, there’s a big diverse crowd that shows up because the people like different types of metal. It’s usually a good thing, sometimes it ends up a little rough depending upon which types of bands are on the bill. I like the mixture, it gives things more of a festival vibe.

Dead Rhetoric: How did the guest appearance on the new Dead By Wednesday come about for “Break When I’m Dead”?

Eric AK: We had those guys open up for us on a week-long East Coast tour. They were great and we got to be really good friends with them. They called me and asked if I wanted to sing on one of their songs, so they asked me to pick one. So I just picked one, wrote some lyrics to it, sang on it. I was just listening to that album yesterday, the band sent me a copy of it and there are some really good songs on there and some really cool singers.

Dead Rhetoric: Looking back on your life, what advice would you have given to your 20-year old self and 30-year old self to make things better or easier on you in the long run?

Dead Rhetoric: I’ve read through other interviews that you like to fly helicopters and even have a pilot’s license – where did you interest in flying begin and what have been some of your favorite experiences in flight?

Eric AK: Wow. My father was a private pilot instructor my whole life. Every other weekend he was gone flying or he would take people flying, I’ve always just loved it. The opportunity came up to go to this helicopter pilot school so I took it and I got my commercial license so I can fly people around if I need to. It’s been years since I’ve flown but it was a lot of fun, it’s basically a really expensive hobby.

Dead Rhetoric: It’s interesting that singers like yourself and Bruce Dickinson share an interest in aviation… is there a correlation?

Eric AK: You know, I had no idea he was a pilot before I got my license, but since then I like him even more and more every time I hear about it. He beat cancer, he has a Ph’d in music, he owns a bunch of businesses, he’s just a monster that guy. I wish I could be half the man as him and have half his voice, I’d be really happy.

Dead Rhetoric: Have there been any particular places that Flotsam and Jetsam hasn’t been to play live that you would like to tour?

Eric AK: Yeah, a lot of them. Russia, Australia, anywhere I haven’t been I’d like to go. Those are on my bucket list. We got to visit Japan once for a couple of shows, fly in and out but I didn’t really get to experience anything. I would like to go anywhere in Asia and play. This is a great planet- everywhere I’ve been I can find really, really cool things about it. I’d like to experience it all, so anywhere somebody wants us to play, I’m in.

Dead Rhetoric: Is it a difficult process even in a headlining situation to come up with an ideal set list given all of the albums in your discography?

Eric AK: Yeah. Sometimes the set list is relying on how much time we have to prepare for it. That really sucks because you end up doing the same stuff that you did on the last couple of tours, everybody is just warm to it. We’d really like to have a nice flow to the set list, we don’t want one song to sound like the one that we just played, we have a diverse, flavorful set list so you don’t get bored. We are just now starting to be able to add more production to our show, and have a little more fun with stuff so the set list is going to be studied and directed before we go back out again.

Dead Rhetoric: What concerns you most about the world that we live in now?

Eric AK: Oh. Religion. People need to get kind of on the same page, especially in this world. Diversity is great and all that but if you believe your religion is telling you to kill everybody else on the planet we’ve got a problem. We all need to get at least somewhere near the same circle of life with some kind of idea of leaving each other alone, and live and let live.

Dead Rhetoric: How do you see the rest of 2016 looking like for Flotsam and Jetsam in terms of touring and promotion? Would you ever consider doing a long form ‘history of the band’ documentary DVD/Blu-Ray encapsulating the 30 plus years of the band?

Eric AK: That would be great, if we could find somebody who would tell the story more honestly than I would, then that would be great. The rest of 2016 looks like we are going to be busier on the road than we’ve probably ever been and I can’t wait for it. You can’t tell people I’m a metal singer for a living and then not be out on the road doing it. I really want to stay out there as long as I can and hit every place that I can, I love to see the smiling faces at the end of the show so that’s what I want to do.