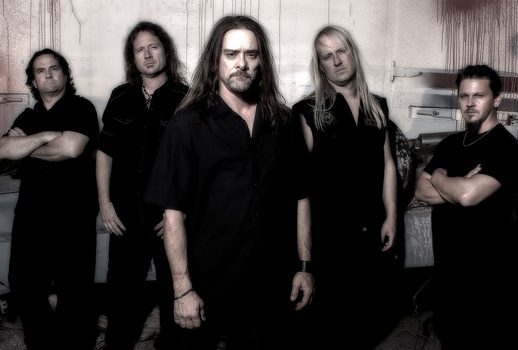 Dead Rhetoric: How did you approach your bass playing on the new album, and are you conscious of what’s been done in the past between Jason Newsted, Troy Gregory, and Jason Ward – while injecting your own take on things?

Spencer: For the new album, I just did my thing. I come from the old school of leaving metal in the mindset of 1988-89- that’s the pocket of metal that is my favorite time. I got into other genres of music- but I could always go back to (Megadeth’s) So Far, So Good…So What! and Peace Sells. So joining the band back in 2012 I’m just going from 1988 to 2012 and that big hopscotch where I didn’t really pay attention to a lot of metal bands and the transitions. Me playing now is like being a 21, 22-year old kid so my style has changed a little bit to relearn my instrument- I’m not the kid who learned AC/DC, Iron Maiden, Judas Priest, Slayer- that climb of heavier and faster material. I started playing the bass because Paul McCartney was my favorite guy in the Beatles, Gene Simmons was my favorite guy in Kiss- I was always drawn to the bassist.

My mom used to listen to Aerosmith, Earth, Wind and Fire, Parliament – disco and funk stuff, that was bass driven. I learned that, then got back into metal when Sentinel Beast got invited to play the Keep It True festival in 2012, so I had my metal chops built back up when Kelly hit me up- which was the funniest thing. I probably would have said no, but I had just been rehearsing for five months with Sentinel Beast, and I could play fast and mix the flavor of who I am. I am more of an in the pocket kind of guy, I like groove. Having the freedom to put that into Flotsam stuff- to me Jason Ward is a very pocket, groove bass player. His work is some of my most favorite things to play live, the material he wrote with “Me”, “Empty Air”, “Smoked Out”, that stuff I love. If anything, I’m falling in line with the stuff that Jason Ward did because it’s natural to me. Playing around the guitars on some sections, locking back into the guitars on others. Trying to find places where I can partner up with my drummer, because that’s my guy.

Dead Rhetoric: Do you find yourselves getting influenced by newer bands or technology advances as much as the original thrash/power scene of the 1980’s?

Spencer: Newer bands not so much- other than watching bands like Hatchet, Exmortus, Holy Grail on the American side, then you have Evil Invaders, Enforcer over in Europe. It’s cool to see these bands have that same kind of energy that the original scene had in 1985-86. Not being influenced by it, but sort of willing to keep our game up to match what they are doing. We are in our late 40’s and early 50’s, and we could either stand there on stage, or does the music move us a little bit. Or are our backs and necks so thrashed through the years from headbanging so much that we can’t do anything? We are still being who we are and let the energy of the music play through us. Technology-wise, we are all flipped over to Kemper Amps, we have amp modeling for the guitars- so tone-wise that’s where the technology comes into play. Another technology thing is everyone can bring their Pro-Tools rigs on their laptops. We can track stuff as we are touring, we can record things so we are prepped for working on new material as opposed to the old 4 track tape recorders.

Dead Rhetoric: Do you see this new technology as an advantage to a veteran band who had to get things down tight in rehearsal studios before going into record in professional studios when it comes to recording?

Spencer: In the case of the new record, it’s how we wanted to move forward with it. We had our cluster of 17-18 songs that we had written and worked with, we worked on every one of them as a band. Change the tempo here, half-time it there- figure out structures and flows that actually worked. We developed them from their shells of being tracked with two guitars and a drum machine maybe, and turning it into what we created structure-wise for the songs. Verse, chorus, bridge, double up on certain things, maybe half-time it before the solo, try to figure this out as a band entity. That’s what we would have done in 1986 in the rehearsal room together. You all work and create the song, versus having one person work it out and playing it that way- to me it’s not a band, there’s no outside influences to make something become dynamically a little more unique. Four other guys throwing ideas into it, that makes things more valuable.

Dead Rhetoric: How does it feel to play with Jason Bittner in comparison to Kelly’s drumming in the band?

Spencer: Jason is a machine, just to play with him and the color and nuances. It’s always a challenge to find musicians that motivate me and try to connect. Kelly was before Jason, and Kelly was my favorite drummer to play with because the guy was in the pocket- he has that feel because of that cluster of influences: Neil Peart, Terry Bozzio, I loved how Kelly played metal. He inspired me to play in a pocket of 4/4 thrash, create a pocket within that. Jason takes that a little further, the technicality and the off-time of his beats, when he’ll go into a three over five beat at the end of “Taser”. We thought at first, ‘what are you doing there?’ but it’s very cool. We just lock in and play through the twisting of the groove, either I lock in and let him go forward and there are other times that I partner up. Two different inspirations.

Dead Rhetoric: The set list for this North American headlining run includes a few surprises- especially the Drift material. How does the process flesh itself out between fan favorites and personal favorites in the band?

Spencer: I think the stuff off Drift, When the Storm Comes Down, and Cuatro – that would be the video songs, they are probably the most important to people. People sometimes yell out “Missing” – we don’t have that rehearsed up. We have three new members in a band where we say- we like this, and the fans like this. We want to also sprinkle in our new material, and we have to figure out how do we grab songs there. It’s not like the band can do a Cuatro tour where all we do is play that album, and so on. You have to find the right ones that work within a set that we personally dig and like, you can see the energy of the fans from certain eras. Like the Drift era, that’s when you know that’s when they started to listen to Flotsam & Jetsam. There is the other segment that is Doomsday and No Place – so you have the two different generations that are 4-5 years apart of Flotsam fans. Stylistically they are slightly different, so some people embrace it all, others want to stick with their era. With the new album, it’s us kind of naturally doing what we want, going in an old-school thrash direction but with production and groove-like. We kept both sides of the fence into what we were doing.