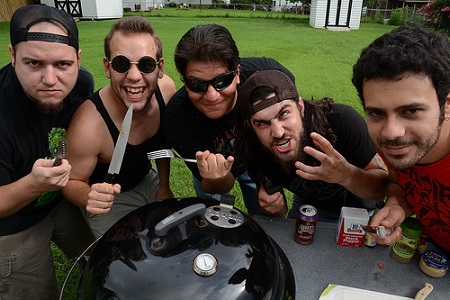 We were lucky enough to stay with Eytan’s friend DK whom he lived with during his stint in Israel. DK’s place is in the suburbs in a beautiful white house that was built in the 1800’s. The boys and I spent the next 2 nights there sleeping, eating good BBQ and doing the occasional phone interview. He also had a beautiful acoustic piano that I played and played and played.

Our next date was in Chesapeake, Virginia. This proved to be one of my favorite sets of the tour so far. I can always gauge how good a set is by how seamlessly and comfortably we can navigate through the set. The more relaxed we are on stage, the more engaging and adaptable we become and our set becomes more of a resonating meditation of music than anything else; a tantric expression of love and musical enjoyment. When I am at my best, it’s like I am on autopilot, acting completely on instincts and riding the set like a spirited surfer on a tsunami of sound. This was the first show in a state where you are still allowed to smoke in bars. It was like going back in time to a stinky, slightly yellowed past. The smokers in the band took advantage of this onstage and lived out their Keith Richards fantasies.

Then it was off to Richmond, Virginia: home of many great metal bands such as Municipal Waste, Gwar and Lamb of God. We were scheduled to tape an appearance on a cooking show called Brutally Delicious with Bruce Moore. We called him in the afternoon to confirm, but it seemed he would have to cancel because he couldn’t get a hold of his camera crew to film the episode. We were defeated until Adam chimed in with: “wait a minute, aren’t we traveling with a fuckin’ camera man!?” So we headed down to Bruce’s house and our roadie extraordinaire Sean DeCory saved the day and manned his camera as Eytan gave a great interview while making some picturesque chicken breasts and hot peppers on the grill. Bruce Moore is a great guy, as well as an extremely interesting dude. Apparently he was a mastering engineer in NYC during the 90’s hip-hop boom before moving to a small town with his amazingly welcoming and polite family. He also published a few recipes from Eytan and I in his cookbook “For Those About to Cook” a few years back.

Richmond is a really sweet place. We played on the main nightclub strip and it really came to life after the sun went down; complete with live music spilling out onto the street like sonic contentment from the open doors of the surrounding clubs. We had a great set and hung around playing darts, drinking beer and enjoying the chaotic atmosphere of the crazed party animals slinking in and out of the bars on the strip. After the show we headed to someone’s apartment for some shut eye. When we got there we were surprised to find a rowdy house party in full swing with music uncomfortably loud on a jittery old record player, beer chugging and a whole lot of boisterous and noisy shenanigans. Although we were ready for a good night’s sleep, we submitted to go with the flow and get a little silly with the locals. I was in the party zone and was loud, making jokes and working the room. I remember at one point getting the entire room of partiers singing “I Feel Good” by James Brown as I pounded on a nearby electric guitar. But as the night got later and later, things got weirder and weirder and took a very surreal and dangerous turn.