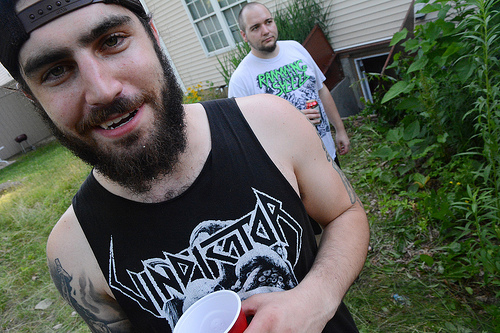 Toronto’s favourite thrash party monsters Fatality are currently on a two-month North American “Towards Disastour” in support of their latest album Psychonaut. Fatality vocalist Spencer LeVon checks in with the following update:

Spencer LeVon here whimsically gliding along the Massachusetts Turnpike with my brothers, drained, clumsy, and dumb while at the same time optimistic and ready for more. Last night was one of the crazier nights I have encountered while touring. We just left the Sonic Pulse headquarters, which is a house on a residential street in a town called Framingham. We performed at a rowdy house party for the 4th of July and shit got out of control immediately. Let me get back to that later, because since last we spoke, we were barreling out of control towards the American border with a fear of having our cavities searched.

Crossing the border into Vermont was actually as quick and painless as I have ever encountered. With some luck, we got the only border official with a sense of humor in the history of travel. Imagine Foghorn Leghorn wearing rubber gloves. We had some playful banter with the guy, and the only slight snag was when our roadie Sean had to prove his American citizenship without having a US passport, during which time the border guard took the opportunity to shuffle a pair of handcuffs in his hand like poker chips.

Despite this minor setback we were in and out in about 20 minutes, which was a real treat. I may have gotten a tad too comfortable when he said “That will be $24 for the 5 of ya, and you can be on your way.” “Make it $23 and you’ve got a deal,” I confidently barked back to the visible horror of my bandmates. Why the hell do I push my luck? We weren’t even in the country yet. He could and probably should have violated our bungholes out of sheer principle.