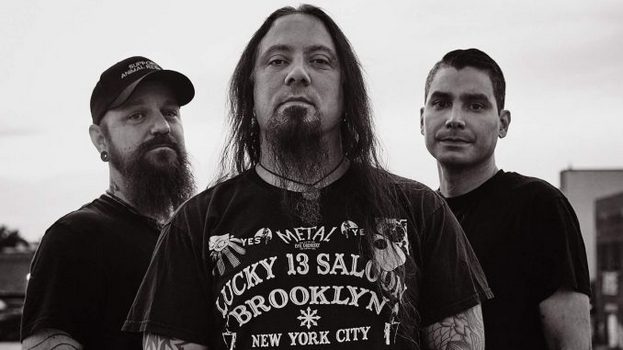 Destruction and doom. Two things that always seem to go hand in hand with heavy metal. The sound of dark heavy riffs just pair well with topics of chaos. The latest proof of this lies in Eyes of the Sun’s soon to be released first album, Chapter I. But to assume that it’s just a bunch of aggression wouldn’t give you the entire tale.

In fact, Chapter I’s strongest asset is its ability to take the doomy and gloomy riffing and provide a level of genuine emotion and atmosphere to enrich them. The dynamic is an easy one to enjoy, allowing the contrasts to really shine. The heavy gets heavier, the mellow gets more mellow. It’s a strong debut, and one that almost didn’t receive the recognition that it should have. Originally released by the band in 2013, it now sees a proper send off in the form of Blacklight Media Records, and gave us the opportunity to chat with bassist/vocalist Jeff Blanchard. He happily gave us all the details on Chapter I, with everything from Hurricane Sandy’s impact to what it’s like to revisit a five year old album.

Dead Rhetoric: Just to start, could you talk about the name Eyes of the Sun?

Jeff Blanchard: The name itself came about due to most of the music being about destruction that we do to the planet, animals, and everything around. It’s what the sun sees.

Dead Rhetoric: Doom seems to be the major descriptor for the band, but what else do you feel makes up Eyes of the Sun?

Blanchard: It’s funny, we get lumped into the doom category a lot because it’s slower and heavier. I think we add a little more on to it than just straight-forward doom. The three of us all come from different backgrounds of music, and I think some of those influences come out. Our guitarist is very much into Meshuggah and Gojira, a lot of the riff-ier metal stuff. I think flavors like that still come through in our sound.

Dead Rhetoric: Correct me if I’m wrong, but Chapter I was originally released independently back in 2013?

Blanchard: It was originally released in 2013. We had all sorts of issues, as soon as the album was recorded. Just after we had finished, Hurricane Sandy happened and all of our gear was gone. Thankfully we had just got the mixes back from the recording. Other bands lost all of their mixes, which was awful. So originally the album came out in 2013, but we didn’t really do much with it. It really put a kink in everything. We used to put a stage show on, and we lost everything – all the gear we had since we were kids, so it [Hurricane Sandy] really put a damper on us as a band and our motivation. We were bummed out.

So we sold the album at a few shows but we didn’t do much with it. We took a little break, then we got back together about a little over a year ago. I wouldn’t say we broke up, but we just took a little break and stepped away. When we came back, Chris Santos hit us up about putting the album out. We had heard it before and he’s seen us live quite a few times. So that’s how we ended up on Blacklight Media.

Dead Rhetoric: So the events of Hurricane Sandy more or less brought the band down.

Blanchard: It totally brought us down afterwards. After losing our gear and stage show, it put a damper on everything and it took us some time to recover after that. It took a few years to really get back into the groove. We were on such a roll after we wrote the album – we had a cool stage show and this and that. It took the wind out of our sails but we are back at it and hitting it hard now.

Dead Rhetoric: Jumping back in and getting signed must have been a real boost…

Blanchard: Oh my god, it was awesome! We got back together and we started doing things – we played and Chris [Santos] came out to see us. He actually brought Brian [Slagel] from Metal Blade out and it was awesome. A few days later, he hit me up about signing with Blacklight Media. So I was like, “Are you kidding me, of course!” It was unexpected and a big motivator for us.

Dead Rhetoric: So what’s it feel like to revisit the album 5 years later?

Blanchard: When we play the songs live, they still feel good. We still love playing them. It’s never like, “oh my god we are playing this song again.” All three of us really like those songs. We have a lot of new material that we’d love to play, but now that [Chapter I] is coming out on Blacklight Media and we are getting a push, of course we are going to focus on this album. But we aren’t discouraged by it, we love playing them live – we are into those songs and I think we put on a really good live show.

Dead Rhetoric: What do you feel Chapter I best embodies about the band?

Blanchard: I think it honestly embodies the dark depression of the way we kind of see things. It’s still relevant to what’s going on in the world today. I think it’s the dark dreariness of the times.

Dead Rhetoric: How do you feel the band has progressed since that point? I know you took a bit of a break, but in terms of where you are now, how have you moved to get here?

Blanchard: I think we’ve progressed in a way where some of the newer stuff has a different feel than Chapter I. It still has a bit of that feel, but it’s also a little bit different. I think the break that we all took, a lot of us were listening to different genres of music as well. When we came back together, those influences started coming out, which was pretty cool.

Dead Rhetoric: So can we assume your next piece of work will be entitled Chapter II?

Blanchard: We are basically seeing how well things go with Chapter I, and we are hoping that they [Blacklight] would love to see Chapter II. We’ll see how it goes, I hope so. We have the album pretty much almost written. It just needs some tweaking. Some of the songs need a few things switched up, and things like that. I would love it if Blacklight Media would like to release Chapter II. We’ll see what the future holds.

Dead Rhetoric: One thing I got out of listening to the album was that there was the doomy, heavy stuff, but there is also a lot of emotion and atmosphere. How much of a role those parts play into the sound of Eyes of the Sun?

Blanchard: It’s a big part of it. We love doing that atmospheric kind of stuff. It plays a big role and we are kind of experimenting with some different styles of that also. I think that’s a big part of what we do. We like the straight-forward heavy stuff, but we also love digging it deeper too. I’m looking forward with that kind of sound also.

Dead Rhetoric: It kind of seems like you don’t really need to switch gears either. You have that sort of stuff set in the background and I think it helps enhance what you are doing with the heaviness itself.

Blanchard: What I like about it is when the atmospheric stuff breaks off and starts happening and then the heavy stuff starts again, it makes it even heavier. That’s what I really like about it.

Dead Rhetoric: You alluded to this when we started with the band name, but could you discuss some of the lyrical concepts you cover – it’s not a happy direction, but could you explain what you are really saying within the band?

Blanchard: A lot of it is about the destruction of the planet. At the time it was written, two of the other band members were vegan. I was for years, when the album was written, I was also. So a lot of it has to do with factory farming and the way that we treat other things on the planet. Quite a few of the songs are about that. There’s a couple of personal experiences too, there’s a song called “Nineteen” on there that was from when I was 19. It was more about drugs and a friend who betrayed me. But most of it is about destruction to the planet.

Dead Rhetoric: From my end, as a science teacher, I like when bands push in that direction. It’s nice too that you can push it without being preachy.

Blanchard: I never want to jam anything down someone’s throat, like “Don’t do this, don’t do that.” But we bring it from an emotional standpoint. We never push veganism or anything like that. It’s from our own personal experience.

Dead Rhetoric: You have the Blacklight Media Spotlight coming up. Is there anything else planned around the time of the release, tour-wise?

Dead Rhetoric: Outside the album and the touring piece we discussed, is there anything else going on with the band?

Blanchard: Not really. We are constantly writing, so that’s all we are doing right now. We’ll do a little bit of touring, and then we are going to keep writing. I’m really excited about the new stuff. Chapter I hasn’t even come out yet but we are excited about new stuff we are writing. A lot of it is just trucking forward with the writing and hopefully do a lot of shows here and there. 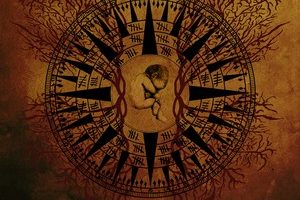