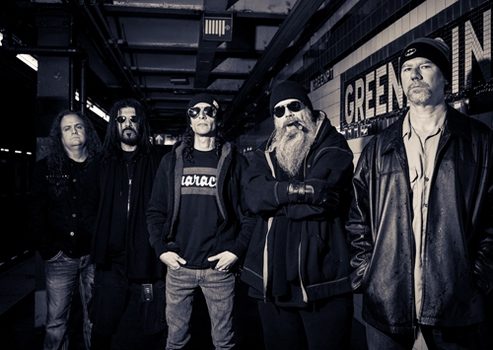 Dead Rhetoric: Where do you draw some of your stage moves from – as there seem to be some specific trademarks that people love when seeing you live?

Thomas: Wow! (laughs). I grew up listening to so many different styles of music. Funk, oldies, punk rock, heavy metal – I let my body do what it’s going to do. Sometimes it looks alright, sometimes it looks like I’ve probably been hit with about 400 volts of electricity. That’s cool if what I’m doing up there is a bit of a unique thing. I’m more or less just trying to feel it out and not look like a boring sack of rocks up there. I don’t mind going to see a band get up and play not move around much if they play really well, but I guess the high energy shows. If you’ve never seen the really old Bad Brains shows, where H.R. is doing backflips and falling all into the audience, that is explosive and exciting to me. At 49, I’m not even going to attempt a backflip, and I don’t know if I could have pulled one off at 20.

To me, the Exhorder show is just as important as the songs. I do my best to try to stay in some kind of shape so that I’m not huffing and puffing up there, or breaking a hip.

Dead Rhetoric: You excelled in chorus in high school and college – performing with the New Orleans Symphony at one point. How did those experiences shape and prepare you when moving into the metal landscape with Exhorder?

Thomas: Good question, and I like that you did your homework! It took a long time for me to incorporate the choral training that I received into singing heavy metal and rock and roll. When I first joined Exhorder, I wasn’t intending on being a singer. I was a bass player that was looking for a gig, these guys were looking for a singer, and I knew I could do the job entailed, I tried out and they hired me. But I’ve always been a musician first- I started on trumpet, then guitar, bass, drums, and learned other such things over the years. In high school, I guess my junior year I was able to join chorus as a part of my curriculum so I thought it would be a good idea to do so to become a little bit better of a singer. And then I didn’t realize I had the range that I have or abilities. It’s one of the best decisions I ever made- it’s probably the best school decision I ever made in my life.

It carried over when I went to the one semester of college at the University of New Orleans. The final grade was two nights at the Orpheum Theater with the New Orleans Symphony doing Beethoven’s Ninth. And that was one of the most incredible experiences of my life. Taking all of that in and blending it with writing heavy songs, it was really awkward for me at first. It wasn’t until I put Floodgate together that this started making sense to me. And then as I got into my thirties, I did albums with bands called Jones’s Lounge and in the early 2000’s Rattler and a band called Pitts vs Preps, I started to push my range and really hitting the high notes. I’m grateful for it, I’m blessed and sometimes it feels like a curse as much as a blessing because I’d rather be doing something else than singing sometimes as I miss playing an instrument in a band sometimes. Somebody has to do it, and I guess I should feel that I am blessed to have the ability.

Dead Rhetoric: What are your thoughts on the New Orleans heavy music community – as it seems to have developed its own distinct flavor and characteristics, where a multitude of musicians and bands have been able to succeed internationally as a result?

Thomas: Yeah, but it wasn’t always that way. When we got signed, there was maybe two or three bands that had ever made it out of here. And they weren’t anything like us really. That’s not to say that we were like the reason why people started paying attention to here, but I think it helped a little bit. The bands here have a very different flavor. I think you can attribute that to the fact that there’s a New Orleans style of music: funk, blues, these bands that played throughout the 60’s, 70’s, even going back to the 50’s – Fats Domino, the Neville Brothers, Dr. John, all these bands had a huge influence on just about everybody that lives in the greater New Orleans area whether they like it or not. Those songs ended up being played at Mardi Gras parades or the kids were dancing to them at the school fairs. These songs they have a rhythm that gets into your soul, into your blood and that has crept into our songwriting. For what it’s worth, if we are going to be credited for having created the groove metal style, you can look back at those founding fathers of New Orleans music and thank them for it. We are imitating them the best that we can.

Dead Rhetoric: What worries you most about the world that we live in currently? What do you think people need to focus on to make the world a happier, safer, and better place?

Thomas: Evil always is lurking somewhere in the background. Sometimes it’s where you would least expect it, and that scares me more than anything. I’ve seen just in recent years people that I’ve known, and hung out with and broken bread with and slept under the same roof with and turn around and be convicted of murder. Or a pedophile, and I’m a husband, I’m a father, I’m a family man. It scares me greatly the world that my children will inherit.

On another side of the coin, I’m concerned that so many people cannot agree to disagree. If people have a varying idea from somebody else, it seems like they want that person to just die and get the hell away from them, leave the country. I don’t understand that, I don’t understand what happened where we can’t have different beliefs but still come together as a people. I think that is something that the entire world could benefit from, maybe trying to be a little more understanding of your brother or your sister.

Dead Rhetoric: Do younger musicians ever try to hit you up for advice, and if so what pearls of wisdom do you share?

Thomas: Yes they do. I always tell them to go back to school, or get a real job. In all seriousness, they do- and I do my best to try to give them any kind of sensible advice that would make things easier for them. I feel very badly for younger bands that are coming up that are starting from ground zero the way the industry is. It’s really hard for a young band to build a strong following and keep it without any kind of real corporate backing. If you are doing everything on a do it yourself basis, best of luck to you and you better eat a big breakfast before you leave the house because it’s going to be a lot of work.

I do get people who ask me for advice on who to talk to, who do I get to to get my music heard, what can I do to help my voice because it hurts like this when I’m singing. I try to help people as much as I can. There were plenty of times where I needed help from people and they didn’t when they could have- so I don’t want to be that guy.

Dead Rhetoric: What’s on the agenda for Exhorder over the next year and your other activities with Trouble and Heavy as Texas?

Thomas: Well, we’ve all got different tasks to accomplish for sure. With Exhorder we have a new album out to promote and build this band back up and beyond to what it ever was. With Heavy as Texas we are a lot more in the earlier stages of a band’s development, so we are in that DIY place that I was just talking about. Fortunately, we’ve got a list of pedigrees in the band where it’s a little easier for us than some bands who have yet to make a reputation for themselves. We still have a mountain of work there. Trouble is in the process of pre-production for a new album which we will start recording in the fall. All of that translates for me personally into a lot of work. I probably won’t be home a lot over the next couple of years, I’ll be doing a lot of touring. Touring equals work, which equals meeting the goals I discussed with you. I’m not afraid to work. 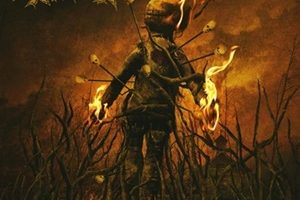