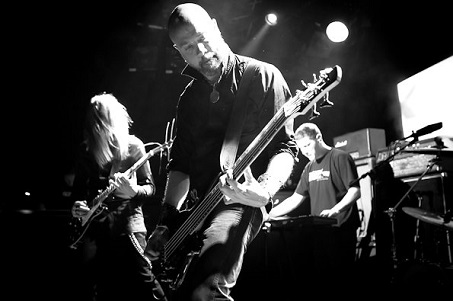 Blistering.com: Evoken live has to be a monstrous endeavor to pull off. What goes into the live show and does it involve sticking close to the studio sound? Doomy improv sounds peculiar, but it could be awesome!

Verkay: We attempt to re-create what you hear on CD into a live setting, just heavier and louder. I mean, certain aspects of course have to improvised, like the cello. If we tried, we probably could convince someone to play cello for us live, but I really think the music would overwhelm it, making it difficult to hear. As time advances, we’ll attempt to add various characteristics to the stage setup. At the moment, there’s nothing elaborate regarding our stage setup, but this will change, without overdoing it, since the music is the most important. But, we are aware that having something visual can create an atmosphere. It will take some time to incorporate these ideas, but eventually we will be using them.

Blistering.com: Band member changes are a fairly standard occurrence for any band but especially one that has been around as long as Evoken (not to imply you’re old or anything). How do adjust to/integrate new members over time? Have any resulted in meaningful impacts on the band’s sound?

Verkay: Ha-ha, in terms of human years, yes we’re getting up there in age. In terms of the universe, we’re just a developing fetus. We’re quite fortunate with integrating new band members because they were friends of ours for the most part. They also shared the same influences, are extremely talented, and possess a wonderfully intense amount of dedication. The only person we had to develop a relationship with was Don, since we only met for the first time at Evoken rehearsal. Now Don is like a brother to us.

Anytime a new member joined the band, they had an undeniable impact on the band. Especially now, having Chris, Don and Dave in the band, I believe has made this the most talented line-up we’ve had in years, maybe ever. Each guy has such an impact on the writing, and you can clearly hear this on the new album. We’re very fortunate to have Chris, Don and Dave in the band now. Not only do I consider them band members, I can consider them brothers, my extended family. Evoken has inherited the various influences they have brought with them, and vice-versa. I’m quite proud to be in a band with those guys… John as well, but he’s not new.

Blistering.com: That being said, it has to be difficult to craft music this draining, especially for as long and consistently as you have. Is it some form of catharsis from terrors the world over or just an uncanny ability to channel misery through musical prowess in your songs? What keeps the bar high?

Verkay: In the end, a little bit of both, but we do have this unexplainable ability to conjure up songs based around strong emotions of misery and anger. Of course we encounter difficulties from time to time, but we never found ourselves struggling. Something happens when we’re all in the room together creating music. We build upon each other’s ideas. I don’t believe that’s something you can easily sense. We’re extremely tough on ourselves, every riff and song must be 100% in our minds. There can never be a riff that simply serves as “filler.” In addition, everyone in the band has to be 100% satisfied with a song. The band has never emphasized a “tyrant” in the band. There are a few reasons we set the bar high for ourselves; you’re only as good as your last recording.

For us, we always feel room for improvement, there’s no difference between the writing or the recording of the album, there is always room for improvement. Once you cross that threshold of believing an album is perfect, then it’s time to end. Also, keep in mind, there exists an insurmountable amount of bands releasing incredible music. Then finally you have the fans. They all have their favorite albums, and they definitely can tell when a band is beginning release sub-par albums. It’s pretty obvious when a band has decided to extend their existence by relying on their past success, and feel they’re only obligated to release that one successful album over and over again, they become stale, which eventually begins to diminish their impact with the fans.

We’ll know it’s time to lay Evoken to eternal rest when we become complacent and begin to feel there’s no longer a valid reason to set the bar higher. Until then, the misery will only become stronger, the atmosphere more dreary.

Blistering.com: Speaking of longevity, how does it feel for the band to be pushing 20 (crushing!) years old in the near future?

Verkay: Well, I can tell you it’s no longer in the near future. We crossed the 20 year mark this past April. Although, when I sit back and reflect, I do feel a bit old….ha-ha. Aside from age, I’m extremely proud to have made it this far, continuing to push ahead. Majority of bands seem to only last five to ten years at the maximum, but we made it 20+ years; it’s incredible. What makes this milestone even more special are the numerous difficulties and hurdles we made it through. There were countless times it felt as if Evoken would come to a crashing halt. As a band, we survived a few line-up changes that would have decimated a band. Even personally, we experienced extremely course situations, but remained steadfast.

I really attribute our longevity to our unwillingness to compromise. We could have easily changed and followed the changing trends in the underground when death metal and or black metal were colossal. We remained dedicated to the original idea of Evoken, and will continue to do so.

Blistering.com: I personally came to know the band not long afterQuietus was released, and while similar in many regards the band is otherwise a much different beast. How would you characterize the outlook and shape of the band now versus then?

Verkay: I would characterize it has a progression, but still remaining true to the original idea of Evoken. Any writing changes that may have taken place are sub-conscious. We never write a new album with an idea in mind as to the direction we want a new album to develop. We write what naturally flows through.

With each album we have learned and developed our own abilities. WhenQuietus was released, we were still a relatively new band, but gaining experience as went moved along. We began to understand how to use the studio to create a stronger atmosphere than the songs alone presented. You see, when we write a new album, we never come into rehearsals or the recordings with any preconceived notions on the complete atmosphere we wish to create. Normally, that happens when we begin mixing the album since it’s quite difficult, for me anyway, to convey an idea I may have in mind. So, in order to develop that idea into reality, it’s a matter of experimenting with different elements in the studio. As ideas begin to take shape the atmosphere comes to life.

Prime example would be Quietus, once we started mixing the album, a haunting atmosphere…old and ethereal, formed. It was only when we started to “tweak” certain things, add or remove different effects, we began to hear those ideas come about. Now, with so many years under our belt, being in the studio so many times, we have a better understanding which effects can bring us closer to those ideas we have in mind…if that makes any sense.

In the end, we’ve only developed better control and understanding on creating the various concepts. The music and outlook has remained the same. We’re just moving forward in trying to release the emotions associated with darkness and misery through music, in such a way that not only affects one on a mental level, but a physical level as well.

Blistering.com: Thank you for taking the time with these, that about wraps it up. Here you can say/unleash whatever you want to upon our readers, what’s important that they really need to know about?

Verkay: First, I want to thank you for including us in your zine, to be a part of something quite special to you and your readers, we’re quite honored. Everyone’s reaction toward the new album has us completely floored. We are beginning to work on touring in support of the new album in the US, Europe and so many countries. ‘Atra Mors’ will be available on vinyl in the coming months, as well as t-shirts made. We’ll keep everyone updated. Keep an eye out for the new Official Evoken website.