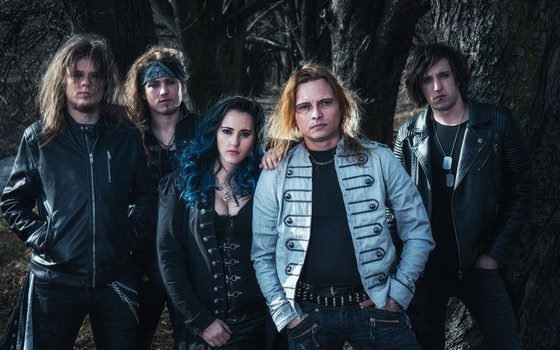 Although heavy/power metal has traditionally been more of a Western European and Scandinvian movement as far as the musicians and groups that have made in roads in the scene – Helloween, Stratovarius, Hammerfall, Sonata Arctica, and so on – it’s clear that other countries are now bringing quality work to the table. Take Eufory – hailing from Slovakia and transforming from a Def Leppard tribute act in their beginnings into a group that with their latest album Higher and Higher gained the mixing/mastering services of Masterplan/ex-Helloween guitarist Roland Grapow. The performances, songwriting, and atmosphere capture the essence of the movement – taking you on a journey of sound that can make you fall in love with the genre again.

Feeling the need to have our readers learn more about this outfit, we sent off a series of questions to guitarist Peter Drábik. You’ll learn more about the early days of Eufory, the growth from their debut album to Higher and Higher, the challenges they face, as well as a little bit about the Slovakia metal scene.

Dead Rhetoric: Can you share with the readers the transformation of the band from the origins as a Def Leppard tribute band into becoming more of a heavy/power metal act? What were some of the early growing pains or struggles that you had to endure to get a solid lineup and idea of where you wanted to go with your style?

Peter Drábik: Our drummer Miriama originally came with an idea of forming a Def Leppard tribute band, but after some other members joined, things started to move – Števo had already written several of his own songs and Ľuboš was capable of singing much more demanding stuff. It took years before the line-up stabilized mainly because it was hard to find people who wanted to put everything into music no matter what. Indeed, our music evolved over the time along with us growing up as musicians.

Drábik: To be honest, I don’t really know how it all works in other bands, but I feel like working on the first album is different in every aspect when compared to any release that follows, especially when you have never been a member of a band that was able to stay alive long enough to put an LP together. In fact, I joined this band as the last member, a few months before the recording sessions of FIE started, but I can tell you that it took maybe 5-6 years until all the songs were written. You know, the priority was to have enough material to perform some club gigs and the idea of recording an album emerged after our first manager joined us in 2013, I guess. Anyway, the overall response was quite positive, especially from people who had never heard of us before. Funny thing is that even some people didn’t want to believe that we are from Slovakia.

Dead Rhetoric: You recently signed to Sliptrick Records who released your second album Higher and Higher. How did you attract the interest of this Italian label, and how important do you believe having a proper label behind you is to further the interest and popularity of the band in comparison to what you’ve been able to do for yourselves so far?

Drábik: No breathtaking story here – if I remember well, the other day a mass e-mail from the label arrived and there it all started. The guys from Sliptrick Records liked our demos recorded in our rehearsal room, so after some time we closed the deal. After a few days from the official release date I can tell that much more people are aware of our new CD but I’m curious what will eventually happen in a few weeks or months. You know, we have never closed a deal with a label before so we don’t know yet what to expect.

Dead Rhetoric: Where do you see the major differences between Higher and Higher and your debut album? Do you believe having the mixing/mastering skills of Roland Grapow (Masterplan, ex-Helloween) elevate the professional sound you were hoping to achieve?

Drábik: One of the differences is the fact that the material for the Higher and Higher album was written in a significantly shorter amount of time while us being inspired by slightly different artists. This time I was also a part of the writing process, so this may have made some impact as well. The sound of the second album is incomparable with the sound of the first one. Roland is a master of this genre and he was an obvious choice. He did a fantastic job and I believe that we will visit his studio in the future, hopefully more than once.

Dead Rhetoric: One of the things I enjoy most about Eufory is the fact that you seem to really work hard on developing strong hooks and melodies that aren’t necessarily stuck in being the fastest or flashiest within the heavy/power metal genre. What qualities are you looking for when you create and execute material for the band – and is songwriting an easy or difficult process for the band?

Drábik: After listening to some of our songs I always ask myself how did we come up with this idea?. Our creative process is totally unpredictable, so it is hard to describe. It usually begins with an innocent riff which is subsequently being enriched by other instruments. After some time, the basic skeleton is done and then our singer appears and starts to sing a melody that no one heard before and everybody says grab a phone and record it before we forget. Sometimes it’s hard to come up with a topic for lyrics, though.

Dead Rhetoric: How did the idea to record a Motörhead ballad come about? It’s not a conventional choice for a band of your style, that’s for sure…

Drábik: Some time ago we played a couple of shows that were a tribute for Lemmy Kilmister and the song which is also on our CD was contained in our song list. We liked it so much that the decision came spontaneously.

Dead Rhetoric: How would you describe Eufory in a live setting compared to your recordings? What do you hope the fans are able to get out of a performance from the band?

Drábik: Our goal is simple – we want to perform at least as well as on the recordings, with a little bonus – we want to give our fans as much energy as they deserve, so we are not the kind of guys who stay in one place for all of the gig. We believe that a live show is something like a theater performance.

Dead Rhetoric: What can you tell us in regards to the metal scene with Slovakia? Is there a healthy amount of proper support from the promoters, clubs, venues, other bands, and fans? Or do you find that you achieve more support from other territories in the world?

Drábik: I can’t say a bad word about promoters and clubs, but fans‘ participation is sometimes woeful. However, this might be a problem for the fact that metal music isn’t being recognized the same way it used to be in the 80’s. Nevertheless, we’ve performed plenty of shows in the Czech Republic and the scene is rather better there. Generally, we enjoy gigs in the Czech Republic much more.

Dead Rhetoric: You have an interesting quote on your personal Facebook page from Dan Brown that states: ‘Everything is possible. The impossible just takes longer.’ What does this quote mean to you, and how do you apply that thought to the activities of Eufory?

Drábik: For me it means that one should never give up one’s dreams. You know, I started playing guitar ten years ago, when I was 17, and if someone told me that in ten years I’d be standing on a stage which I was looking at as a fan at the time, I’d probably laugh at him. Now, when I look back, I am starting to realize how many things I never predicted to come true and I understand that one has to be passionate about what he or she is doing and everything else will slowly start to happen. Want proof? This interview, for example.

Dead Rhetoric: What challenges does the band face at this point in trying to climb the ladder for more respect and popularity?

Drábik: The hardest thing is to be somehow exceptional within a multitude of bands to attract new fans. Also, if you want to stay interesting for people, you need to constantly push new material and sometimes it’s hard to keep up.

Drábik: You won’t believe this, but this is actually a hard question. Those times when I listened only to metal music are long gone, but I’ll try to do my best. The first one was released by my favorite heavy metal band even before they started to play heavy metal, I guess – Stained Class by Judas Priest. Second one? Helloween – Dark Ride. So different and yet so brilliant. Last, but not the least… Black Sabbath – Heaven and Hell. With this album I’ve fallen into an eternal love with the 80’s. And I love Dio, that’s it.

A few years ago I had an opportunity to see Europe in one of the rock festivals in Slovakia. The last encore was, indeed, The Final Countdown, and in the middle of this song the mixing console suddenly stopped working, so one could barely hear only drums and stage monitors. I guess that guys from Europe didn’t even notice that, so they continued playing as if nothing happened. However, thanks to that I could hear everybody in the audience singing and it was a beautiful atmosphere.

Dead Rhetoric: Where would you like to see Eufory as a band within the next two to three years? What types of goals does the band set out and hope to achieve?

Drábik: I’d love to see us on bigger stages, preferably abroad, presenting our third album. We don’t have any long-term goals, I guess. We will just continue doing what we do – playing shows, getting new fans, collecting ideas for new songs. You know, even though each of us does for the band as much as possible, we don’t want to feel like we are forced to do something.

Drábik: This is exactly what our lyrics are mainly about. We live in a world full of wars, poverty, selfishness, ignorance, and all of this has been caused by us – the mankind. A change is inevitable, but I am afraid that it’s going to be pretty drastic. Either we will eradicate us ourselves, or Mother Earth will take care of it.

Dead Rhetoric: What is on the horizon for Eufory over the next year to support this album? Has work begun behind the scenes on the follow-up, and if so what type of direction do you see those songs having?

Drábik: We have already booked a lot of shows till the end of this year and we’d like to shoot at least one music video. Some work behind the scenes has already begun, but let me keep details to myself this time for now. 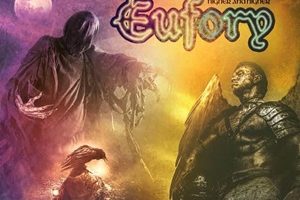