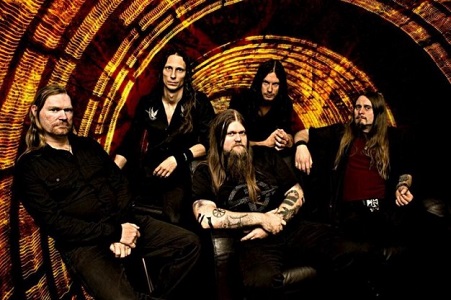 Blistering.com: Do you think that because this line-up has been together for so long that you can pull off such things? Rather, what’s the dynamic like nowadays?

Bjørnson: Ever since this line-up has been together, we’ve been able to set some necessary rules or guiding principles as to how work within in the band. It’s pretty simple. We’ve handed decision powers according to competence to a particular field. If it comes to drumming, we can discuss and discuss, but if we come to a deadlock, Cato’s [Bekkevold, drums] voice will be the loudest. If someone else knows how to better drum, then they should be the drummer [laughs].

When it comes to the live performance, Ice Dale [lead guitars] is very much an expert. He’s engaged in the whole rock n’ roll thing, played a lot of concerts with other bands. He might weigh in heavier when it comes to deciding setlists. I think it works. People know if we have a project or a special concert or recording, we know that the more you put into it, work-wise, the more deciding power you’ll have over the project. That way, it balances itself out.

Blistering.com: Is it easier for you to divide up these responsibilities?

Bjørnson: I have to be…it helps to realize that if you’re a composer, it means you have a lot of narcissism, you have decided to share

your inner-workings with the world. If you can admit that, it’s at least possible to do something with that. For instance, I don’t have a say in merchandise because it’s been determined my aesthetical sense is so poor [laughs]. It’s dangerous if they let me loose on that.

Blistering.com: A lot has always been made about the particular phases of Enslaved, and we’re well into Phase 4. How long do you foresee this one lasting?

Bjørnson: We’re really comfortable with where we are now. We’re exploring the fusion, or synthesis of these two first periods. I agree. We had the phase where you’re going through this demarcation period, then move on. There’s so much to explore in that, finding the extreme metal energy with the progressive edge. I see us staying with that for a quite a while. What’s going to happen after that, we’ll have to see.

Blistering.com: As for North America, you’re taking on a more aggressive approach. With your direction being what it is, how do you think Enslaved fits in?

Bjørnson: I can’t really say we had enough presence before Isa. Having a French label [Osmose Records] and the trouble they had in setting up operations in the U.S., made it hard. We’ve been getting an immense response. The metal fans are more similar to the ones in Scandinavia, not like the more conservative approach they take in some parts of Europe. In U.S., it’s more of an advantage to be floating in and out of the box, it makes a band interesting. In Europe, you still have to convince people, but you’re not clearly defined.

Blistering.com: You’re coming up on 20 years as a band next year. Anything big planned?

Bjørnson: Yeah, we’ve thought about it and we’re working on some things. Actually, I’m trying not to think about it, because the project is totally over-the-top. I know the band, and we’re going to pull it off. Even thinking about some of the crazy stuff we’re going to pull off…it’s going to be great. Once we hit the end of the North America tour, we’re going to announce the “program” for next year. It’s going to be weird turning 20 in 2011, but the atmosphere; it’s pretty much the same in the band. We’re older, but have the same feelings and enthusiasm as we’ve always had.