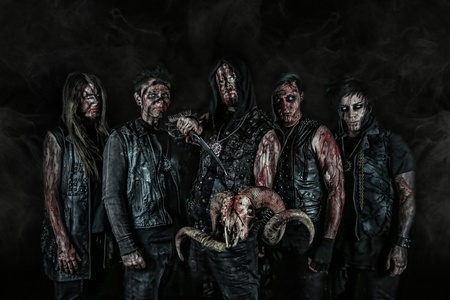 When you think of the symphonic black/death movement, one has a tendency to immediately jump towards Europe to find the best of the best. It’s been lingering below the surface here in the North American waters, but some newer acts have been giving the genre some love as they begin to ascend. One such band is Empyrean Throne, who are about to about to release their first full-length album, Chaosborne.

Taking the route of bands like Dimmu Borgir or Anorexia Nervosa, what gives Empyrean Throne some added vitality is just how heavy they still can be. They keep the black/death elements just as unwavering in their presence as the symphonic components. It’s elegant, but brutal at the same time. We saw fit to send some questions over to the band for further inquiry, and vocalist Andrew Knudsen supplied some answers surrounding the band’s musical direction, conceptual themes, and influences.

Dead Rhetoric: You are playing a very European-sounding type of music with Empyrean Throne – what inspired you to go in this route, hailing from California?

Andrew Knudsen: Empyrean Throne was initially conceived while I was traveling through Scandinavia visiting the part of my family that chose not to journey with the sect of my clan that came to the United States long ago. This experience was life changing and has had a profound effect on me as an individual and artist. Collectively, as a band, we all draw influence and inspiration from European music, even though my comrades and I don’t share the same heritage. Symphonic extreme metal is both powerful and captivating. While the orchestral element was limited at the band’s inception, it has continued to grow and take shape into the mammoth that it is today.

Dead Rhetoric: Chaosborne was initially going to be released independently. How’d the deal come about with M-Theory Audio?

Knudsen: The way everything came together was quite serendipitous. At the time we were planning Chaosborne’s release, we didn’t have management or a label. However, during the initial planning stages of the self-release, Extreme Management Group entered the picture. Once we signed a management deal with EMG, our manager, Mark Muller, advised us to cancel the release date and shop the record to prospective labels. No sooner had we done this that Marco Barbieri and M-Theory Audio came into the fold. Marco and his team are forward thinkers: they push their artists and foster creativity. More importantly, they are genuine individuals who care about their artists and want to see them grow. We couldn’t be happier with our new label and are proud to carry the M-Theory banner alongside our Chaos-iconography.

Dead Rhetoric: How do you feel the band has changed since your last EP, Demonseed?

Knudsen: Since Demonseed, Empyrean Throne has morphed into the symphonic titan that we hoped it would be. We have grown as musicians, artists, and individuals in ways we could not have imagined. The Demonseed era is one of self-discovery. During that time we chose to introduce the spiritual side of our message and music into the overall framework of Empyrean Throne. The roots of what we have become are present in the EP; they had just not flourished. As the title implies, Demonseed is the birth of the war machine, the beginning of something beautiful and terrifying. We sought to push our sound to new realms of creativity with Chaosborne, and succeeded.

Dead Rhetoric: What do you feel that Mick Kenney brought to the table for the production/mastering/mixing side of things?

Knudsen: Mick Kenney is the Doctor Frankenstein of music. He pushes the artist to explore the dark caverns of their being and forces them to engage new ideas. He focuses on what comes naturally, what makes the artist unique. What sets them apart and makes them different. When you are working in his lab, you are his test subject. You forget about the outside world. You focus solely on your inner fire and creative spark. I opted to undergo his “Necro Sprinkles” technique, a process where he puts the vocalist in the most uncomfortable environment possible and has them literally try and lose their mind in a single take that lasts the duration of the record. In my case, this meant, being alone in the dark, piss-drunk, cold, and covered in blood and vomit in Mick’s bathtub for over an hour screaming my guts out. It was absolute hell at the time, but from that take we got some profoundly agonizing vocal performances that are interspersed throughout Chaosborne.

Dead Rhetoric: Could you go into the conceptual story behind Chaosborne?

Knudsen: Chaosborne centers on a Templar named Mathias during the 10th Century Crusades. Ultimately, Mathias comes in contact with the eleven-angled pantheon of Chaos deities and other alien demigods. This leads him on a journey of self-discovery where he learns about the true nature of Chaos and his Inner Flame. By story’s end he is able to accept this new world-view and embrace the power and might of Chaos itself. The saga of Mathias is massive in scope, one with many twists and turns. It is the subject for an entire interview itself but for now this is a decent synopsis.

Dead Rhetoric: Do you feel that a conceptual story helps tie up the album that stand-alone songs cannot?

Knudsen: I have always felt that concept albums do have a greater impact on the listener, if executed properly. This is not to say that non-concept albums can’t provide the same experience, but having that story-driven framework in place certainly helps when leaving a lasting impression. Empyrean Throne is built around storytelling. It helps us promote our message and serves as a great creative avenue for songwriting. We seek to have every release constitute a story-driven narrative.

Dead Rhetoric: Can you go into the details of the artwork for the album?

Knudsen: The artwork for Chaosborne is the summation of the album’s story. It features Mathias, a former Templar Knight, now reborn as a demigod imbued with the power of Chaos. We wanted something raw, visceral, and terrifying that was not only worthy of the album title, but also illustrated the scope of the album’s story. Our artist, Vladislav Kutusov, did an amazing job on cover art. Every little detail, from Mathias’s god-slaying claymore, to the citadel of Chaos, was precisely executed. Again, Vladislav sure as hell delivered.

Dead Rhetoric: What do you feel is the key to implementing keyboards/synth into extreme metal without watering down the formula?

Knudsen: There has to be give and take with everything. Each element of the song should be working hand-in-hand to provide that special captivating listening experience. It should not become a pissing contest between the orchestral elements and metal band’s performance. There should be an ebb and flow between the two. It is also worth noting that the use of classical instruments should be a calculated effort and not just thrown into the mix at random. Say the orchestra is raging a haunting melody within the string section; make that melody the prime focus and have the metal band element as the support. Same theory applies to the guitars; if you have a killer riff, don’t bury it beneath Beethoven’s jackboot.

Dead Rhetoric: You currently have a video for “Haereticus Stellarum Pt II.” Any plans for more videos to come?

Knudsen: Actually, we just released a lyric video for “And None Shall Rise…” (Track 4), helmed by Scott Rudd. Scott did a great job per usual. You can check out that piece of musical propaganda HERE. We will also be releasing one final music video, for “Sed Nomini Tuo Da Gloriam,” prior to the release of the record [watch it below]. We went all out on this one, our biggest production yet by far. Conceptually, it deals with the first act of the album’s story.

Dead Rhetoric: What are three albums that you feel have made a large impact on Empyrean Throne’s sound?

Knudsen: Choosing three records that shaped the cornerstones of our current sound is difficult. Again, our influences stem from many different sources and vary member to member. But for the sake of conversation, three contemporary releases that inspired Chaosborne’s sound would include Dimmu Borgir’s In Sorta Diaboli, Watain’s The Wild Hunt, and Behemoth’s The Satanist. In Sorta Diaboli, for whatever reason, gets a lot of flak from long-standing black metal fans, but that album has the most disgusting guitar tone Dimmu has developed to date. It isn’t as majestic as Death Cult Armageddon, nor does it have the harsh raw feel of Puritanical Euphoric Misanthropia, but In Sorta Diaboli is grimy and packs a huge punch. Honestly, since its release, “The Serpentines Offering” has been one of my favorite songs.

Watain’s The Wild Hunt is an easy choice. It’s tribal and raw. They explored different roads creatively, and added many different elements to the overall sound of that record. Erik’s performance on the track, “They Road On,” is amazing. The title track, “The Wild Hunt,” is a primal masterpiece. Lastly is Behemoth’s The Satanist. While it is no secret that this band is influenced by Behemoth’s back catalog, The Satanist was a very different animal for that band. It has a very organic sound while maintaining a very high production standard. Like Watain’s The Wild Hunt, Behemoth took risks with their sound. It is a very personal album to that band, especially Nergal, which shows in every aspect of the record, from the cover art to the lyrics. It’s very inspiring for us as musicians. Again, there are many others that could be included on a longer list, but we’ll leave it here for the time being.

Dead Rhetoric: With the album initially conceived a while back, have you begun working towards any new material?

Knudsen: Oh, yes, very much so! We have general basis for what will become record number two, including riffs, lyrical themes, and even the album title. However we won’t sit down as a unit and dive into the meat of what we want from a second release for some time. After all, we want to push Chaosborne hard, but the DNA for the second release is there and taking shape.

Dead Rhetoric: What’s next for Empyrean Throne once the album is released?

Knudsen: We want to do as much as we can with Chaosborne’s album cycle. We aim to tour and perform as much as possible. We want this beast to be heard. We want to carry our banners to new territories, and sow new disciples in our wake. We have a long campaign ahead but we are ready for it. Chaosborne is a gamma-bomb and we want the world to feel its blast. Into Chaos, Towards the Beyond, Ever Vigilant! 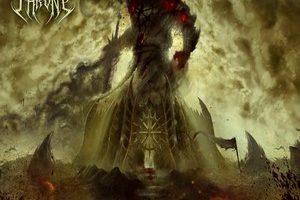