Dying Humanity – Deadened But Not Dead 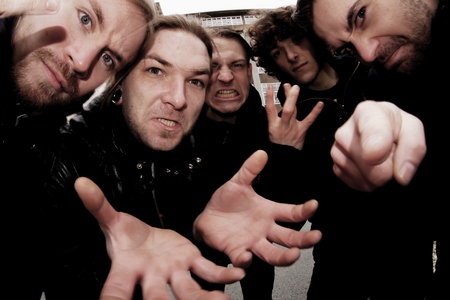 Hailing from Germany, Dying Humanity has been hard at work since 2006. Pushing a style of death/grind that reaches the heavier end of the genre but retaining just enough melody to keep things from becoming dull, Dying Humanity have nailed a balance on their fourth full-length, Deadened. But they’ve done more than that, as a quick blurb and description doesn’t really push into the nuances that Dying Humanity have to offer.

Featuring a new vocalist, and completed four years after their previous release, Living on the Razor’s Edge, Deadened is deceptively straight-forward. As you listen, you’ll uncover NWOBHM influences and some standout melodies as well as the sheer brutality that genre fans desire. With this in mind, we fired off some questions to guitarist Simeon Keller. He was able to discuss the wait between albums, utilizing concept albums, and plenty of information on Deadened.

Dead Rhetoric: Deadened has just been released. How’s the response been so far?

Simeon Keller: Very good. We got some reviews in and most of them had good ratings. The feedback of the fans was mostly positive, too. We are very pleased with Deadened and happy to hear the new songs to be well received.

Dead Rhetoric: Who are some of Dying Humanity’s biggest influences?

Keller: Though most of us listen to various subgenres of metal and other styles of music, bands we like are: Death, Carcass, The Black Dahlia Murder, Megadeth, Iron Maiden, Sylosis and many more.

Dead Rhetoric: The four year delay between Living on the Razor’s Edge and Deadened – was this due to members leaving the band?

Keller: Yes, we had to interrupt the recordings in the studio and shortly after that our vocalist left the band so we had to look for replacement, write new lyrics and arrange them for the new songs. This took us some time and is the main reason for the long delay.

Dead Rhetoric: This is your first album with new vocalist Marcus Friedrich. What does he bring to the table for Dying Humanity?

Keller: Compared to our old singer, he has much more vocal variety. When this came to our mind, we wanted to use and incorporate his vocal range. It may seem unfamiliar to some of our long-time fans but with the use of clean vocals (for the first time) we expanded our vocal possibilities and we think it fits our music quite well. Osher is constantly improving live and shows what he’s got as front man.

Dead Rhetoric: How does Deadened compare to Living on the Razor’s Edge?

Keller: Musically since it has still the typical DYH-style, we wanted to use elements that we like ourselves. In comparison to its predecessor, Deadened may be a bit more melodic and the hooks are catchier. The main difference are the vocals of course because Osher has a different style.

Dead Rhetoric: Why choose to focus on mental disorders for the content of Deadened?

Keller: We didn’t want to do another concept album with only one story so we were kind of looking for a common topic that runs lyrically seen through the album. Because it is more and more present in society, we were interested in it and stuck with the topic. Many young people have depressions or other mental disorders. Of course there are often exaggerations or many extreme examples in our songs but we wanted to show that mental disorders are more prominent in today’s society.

Dead Rhetoric: Would you say the album is conceptual like your previous album?

Keller: No, not really, there is a common topic but except for two texts belonging together, every song is individual. There is no closed story plot.

Dead Rhetoric: What can you say about the horror-esque art of Deadened’s cover?

Keller: The cover visually represents the story of the title track “Deadened.” It’s about an old view about mental disorders: demonic possession as diagnosis. Explained is how the illness/demon takes possession of you and your body. This was illustrated by Joshua Andrew Belanger with a demon busting out of a human body and then going on a rampage. It can be seen as a metaphor for the lyrics.

Dead Rhetoric: Do you feel there is too much emphasis in metal to differentiate between genres/subgenres of metal?

Keller: Basically no, but sadly there is pigeonholing quite often. But after all, there are only two possibilities with music: either you like it or not, no matter what kind of genre. We have many different influences from different subgenre, so we sometimes have problems to find the one that describes us best. We were labeled many different genres but in the end we don’t care. It’s metal – either you like it or you don’t.

Dead Rhetoric: With the ever-growing number of bands out there, how do you keep your own band’s identity distinct?

Keller: We don’t really think about that to be honest. We do the music we like and I think that we’ve gotten our own sound over the years. We do many new things each album and developed much, but a Dying Humanity fan would recognize a new song of ours, when hearing it.

Dead Rhetoric: Do you feel that the German death metal movement has gained some strength over the years?

Keller: On the contrary, it feels like old-school metal (death metal in particular) is decreasing. Because there is much interest and increasing popularity in the x-core styles of metal, there have been many bands and a huge fanbase which is growing faster than in metal, so we are always happy to play with (death and thrash) metal bands and get to know each other.

Dead Rhetoric: What’s in the works for Dying Humanity for the rest of 2015?

Keller: With playing as much shows as possible, we want to present Deadened to a wide audience. There will be some new videos and we also have begun writing new material. 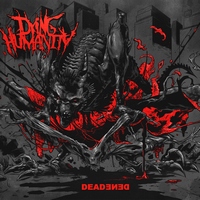