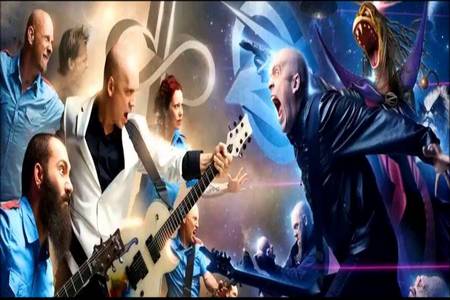 2014 has been a pretty big year for Devin Townsend. After a wildly successful crowdfunding campaign for his Casualties of Cool project, this spring saw the release of said album. Seemingly right afterwards, it was announced that he would be finally releasing the long awaited sequel to Ziltoid the Omniscient. Not only would fans get the sequel to Ziltoid, but it would also be a double album, with one album containing Z2 and another disc that featured Devin Townsend Project. Needless to say, it’s also been quite a busy year.

Now that Z2 has been released, it’s clear that it contains the Townsend charm, but on a whole new level of over the top theatrics and dialogue. A double album that really does speak to everything that he’s been involved with, post-Strapping Young Lad, with the DTP side pushing that Epicloud/Addicted vibe in a more solemn direction. Getting an opportunity to chat with such an charismatic figure such as Townsend, it seemed more interesting to discuss his current thoughts, rather than simply dissecting the new material. Read on to learn about his thoughts on the crowdfunding success, being viewed as a role model, his particular brand of humor, and of course, Ziltoid himself.

Dead Rhetoric: So you were asked to put something else out alongside of Z2, which is where the Devin Townsend Project part came in. At this point in your career, does it get frustrating to feel like you still have to jump through some hoops?

Devin Townsend: No, because technically I didn’t have to do it. I think the thing that ultimately defines what I do is that I’m on a team. I saw a thing on Netflix last night about this one guy that made a billion dollars, but at the end of it everyone thinks he’s an asshole. I think that if you wield this martial law over people then that’s ultimately what happens. For me, I’m on a team: the label, the management, the band, and fans in the audience too. I wanted to do Ziltoid because I personally like it. I like strange, sort of Tetris-style melodies that you mash together and hope it works, and multimedia stuff and puppets and everything that goes along with it. But ultimately it’s going to cost $100,000 to make a bunch of musical stuff about farting puppets.

I think that a lot of people in my life were like, we know you want to do that but we’ve put in a ton of work in trying to establish the band as something that can gain momentum, so do you have anything else on the side that you can also do. So I said, if I do that, then I do my Ziltoid thing. That’s ultimately how it started, in a less than noble way. But in doing it, I realized that it wasn’t as easy as pooping out another Epicloud. I really had to get into the process and it took a lot of arm wrestling for me to get [the record finished]. But by the time it was finished, I was really happy that I was pushed to do this, rather than it being an inconvenience, because the record has a good point to make.

Dead Rhetoric: The first Ziltoid album marked a shift in your own career, moving away from Strapping Young Lad. How did it feel to jump back into that Ziltoid universe after having released a number of different and diverse albums?

Townsend: I think Ziltoid is more than the music. It’s about the freedom that this type of creative outlet provides me. It’s stories and multimedia, orchestras and free structures musically, over the top art, and childish humor. A lot of things about Ziltoid are more than the project itself; it becomes more about being able to, at this stage in my career 25 years in, the fact that I get to do this. That I forced this to happen is a position that I’m in, and I don’t know if there’s a lot of people that are fortunate enough to be in [this position]. So I’m just sort of taking advantage of that, rather than making a big metaphor out of it. I think when it started; it was more about that, with Strapping [Young Lad]. At this point, it just offers me an opportunity to do things that are fun.

Dead Rhetoric: That’s the way it should be, just having fun and doing what you want to do.

Townsend: It’s amazing how much you have to fight to do it though. Here I am 25 years into it. When I first started, no one cared. You are eating Kraft dinner every night but no one cares; I can make whatever, and it’s not going to make a difference. And now, even though it still doesn’t show a lot, there’s a surprising amount of attention that gets paid to what I do. It’s really strange to me how much you have to rationalize every decision. To keep myself doing things that are creatively free, it requires a lot more effort than it used to just to sort of be able to do that.

Dead Rhetoric: In keeping with Ziltoid, it’s been kind of stuck with you since 2007 through various incarnations. How do you feel that Ziltoid itself has changed since you came up with the idea?

Townsend: Well, his balls dropped. I mean, when Ziltoid started, there was a quirkiness to the first record. There’s a grassroots DIY for the elements of the first one, that I think is really endearing because it was just me. But it wasn’t supposed to be that way. As much as it worked and people liked it, it was supposed to be this elaborate thing. Thankfully I get an opportunity, due to crowdfunding, that I get to do now. So it hasn’t evolved as much as just expanded. It’s the same basic idea; obviously seven years later you are in a different place in life. Things don’t end up being quite as heavy as it once was for me when I write. That’s just how things have moved. It’s easy for people say, “Oh, make heavy music again,” but I’m as heavy as I can be right now. So it’s the same thing seven years later.

The only real difference is that I realized that the character [Ziltoid], it’s really easy for him for him to be this raw entity. That’s not really what I wanted. I want him to be fun and entertaining. I want it to be art and sci-fi, but I don’t want it to be a horror movie, or something that maybe doesn’t have a conscience. I was talking to Dave Brockie about that too, with Gwar and his thing with Oderus was that the character is an asshole, but he has a conscience. That’s what makes these sort of characters endearing, you know.