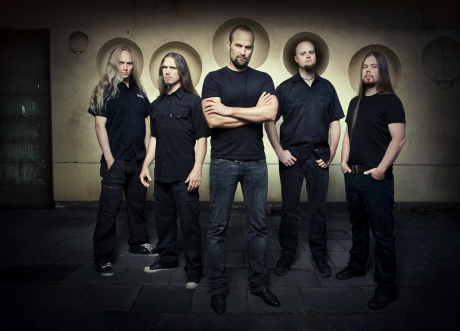 Let us rewind ten years to 1999. Yeah,nineteen-fucking-ninety-nine. The melo-death explosion was in full flight, with In Flames having released Colony, Arch Enemy had theirBurning Bridges, Soilwork ripped off Steelbath Suicide in late 1998 and Dark Tranquillity…well, they quickly learned their lesson with Projector, an album marred by Mikael Stanne’s totally ill-advised clean vocals. And there was Darkane and what arguably is the best album of ‘em all:Rusted Angel.

The Swedes just underwent a name and style change from the much more technically-advanced Agretator and were snapped up by WAR Music, which at the time figured to be the home for melodic death metal. Sure enough, the label closed its doors before Rusted Angel could get its wings, forcing the album to be released on American shores by Relapse in early 2000. But that doesn’t matter right now. What matters is the album eschewed the normal melodic tendencies of their contemporaries for a much more cyber, futuristic, and brutal approach, yet somehow retained a catchy, memorable ebb and flow. And who are we to argue with songs like “A Wisdoms Breed,” “Convicted,” “July 1999” and of course, “Bound” which is literally the best song the band has produced. Ten years removed, the album is every bit as vibrant and fresh, and proved the band to be ahead of its time, what with all the technical, cyber metal mongering going on now.

Subsequent albums like 2000’s Insanity and 2002’s very much underratedExpanding Senses threw Darkane (who comprise of new vocalist Jens Broman [ex-Defaced], guitarists Christofer Malmstrom and Klas Ideberg, bassist Jorgen Lofberg, and drummer Peter Wildoer) right into the melodic death metal fray. After a three-year layoff thanks to an arm injury suffered by Wildoer (a crippling wrist condition nearly forced the man to stop playing altogether), the band returned with the blazing Layers of Lies in 2005.

Fast-forward to early 2009 and Darkane is gearing up to release their fifth full-length in the form of Demonic Arts. Best described as a potpourri of each Darkane album, the band is in top form, bolstered by Broman’s robust screams and Wildoer’s multiple-arms-but-I-have-two drum approach. The man simply kills the kit and he’s a nice guy, which Blistering surely appreciated when we got together via phone…

Blistering.com: How’s your arm holding up?

Peter Wildoer: It’s gotten much, much better. In 2003, it was really bad, so in 2004, I quit playing for six months. I didn’t touch my drums or my drum sticks at all. When we recorded Layers of Lies, at the time, I was still having issues with it, but now it’s getting better and better. When I’m not playing, working with computers and stuff is really not good for my arm, but as far as drumming, it’s 100% better. I have taken a year off from work as a teacher to do music full-time this year, which is awesome.

Blistering.com: Did it force you to change your playing style or warm-up techniques?

Blistering.com: You’ve had Jens in the band for a little over a year now. How has that been working out?

Wildoer: I’m very happy with him. We’ve known him from way back – he’s been a good friend of ours. We totally knew what we wanted and personally, I like his aggressive, high-pitch vocals, so it was a natural step. Live, he’s nailing it 100%. That’s the biggest difference. Andreas [Sydow, ex-vocalist] was a killer vocalist live, but he did some changes now and then, but Jens nails it how it’s supposed to be. Considering he had two shows with us before he did the recording, he was really fresh and it was new to him. Plus, he wasn’t used to us producing him so hard and telling him what we wanted. Klas, Christofer and I always did the vocals and arrangements, so Jens wasn’t used to that. I think for the next record, he will definitely really in the band and everything. I’m really looking forward to the future right now.

Blistering.com: Were the songs for Demonic Art already written before Jens joined?

Wildoer: Most of it was already written. When Jens stepped in, we did two more songs. Always when we do a new record, we have the music written, everything is totally finished, we record everything, then the vocals come in last. We usually arrange the vocals in the studio and that’s something we definitely want to change for the next album. Hopefully we’ll start on it next year and not wait three or four years [laughs]. We’ll do more pre-production with the vocals as well. That was the thing with Andreas – he has so much to do with his work, so we never had the time to do pre-production with the vocals. Jens totally calls me everyday and asks what’s going on with tours, bands, and if we have any new songs. He’s already starting working on lyrics for the next record and that’s something we’re not used to [laughs].

Blistering.com: You did the vocals on Christofer’s solo album [Non-Human Level]. Was there any consideration as to you doing all the vocals on Demonic Art?

Wildoer: For me, personally, it’s a big dream to be the front guy [laughs]. But performing live and doing the drums, I’m not really an upfront kind of person. That would have been cool, though. Compared to Jens, I’m not that good of a vocalist. I can do the screaming vocals and for some of our records, I do the really low growls, but Jens does everything so well. He’s a much better vocalist than I am. We never considered it, plus we’d have to find a drummer and in our hometown, it’s hard to fill the space, so to speak.

Blistering.com: Layers of Lies was a return-to-form album. Is Demonic Art a continuation of that?

Wildoer: Yeah, I think so. We found our way with Layers of Lies. It was a mix of the three previous records, especially Rusted Angel and Expanding Senses. It took the intensity of Rusted Angel and the melodic parts of Expanding Sensesand I think we found that this way is totally great. It’s definitely the Darkane sound. Normally, we don’t think that much about it when we write songs, it just turns out to be Darkane songs, so we never figure out what to do or what direction. The new one turned out faster than the last one. It’s a bit more forward, maybe, even though Darkane is not that straightforward.

Blistering.com: Conceptually, the album is an extension of the song “Organic Canvas” off Layers of Lies. Where did you go with this concept?

Wildoer: For the main track, it’s a continuation of “Organic Canvas.” I’ve always been a fan of movies like Seven and I’m always inspired by different movies. It’s this guy who think he’s doing this art when he’s actually killing people while doing all of this weird stuff. He feels like he’s not doing any murders, he’s doing his art. It’s not a theme through the whole record, but we always deal with that kind of stuff like [mental] illness. That’s been a trademark since Expanding Senses – you know, the messed-up personalities. Maybe it’s because we’re such normal guys [laughs]. We need something to get away from our daily lives to explore that dark side. It’s really fiction, everything, but with a serious sentiment. 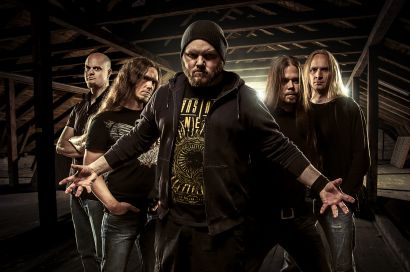 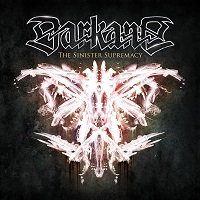