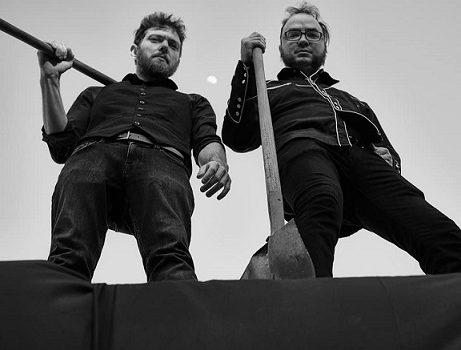 “If Earth and Pink Floyd teamed up and did a soundtrack for David Lynch” is how Austin duo Cortége describes themselves. You could see why: Their cinematic sound is stretched across a variety of genres, certainly not attaching itself to one particular style but also being “heavy,” if you will. Comprised of Mike Swarbrick (bass, moog, mellotron and tubular bells) and Adrian Voohries (drums), Cortége appear destined to be scoring films, or, staying on their ultra-productive and highly creative path, which netted this year’s new foray, Capricorn, a sonic journey as unyielding as you will find. Here to talk more about Cortége is Swarbrick and Voohries.

Dead Rhetoric: Your music is terribly difficult to peg. So, to start, where do you see Cortege fitting with heavier music, if, at all?

Adrian Voohries: Thank you. I would say, obviously, on the more experimental side. There’s definitely some doom/minimalist influence as well. There’s been a wave of artists in the past few years who I think are finding effective ways to elicit the emotions that people usually turn to heavy music to feel without necessarily being loud or abrasive one hundred percent of the time. Utilizing instruments and arranging in a way that creates unsettling atmospheres and produces raw emotive dread, or sometimes bliss even, in different ways. That’s definitely a goal of ours.

Mike Swarbrick: There’s an element of heaviness to our music which allows us to play with heavy bands. The music is also very dark and psychedelic so we’re able to play with psych and post-rock/metal bands as well.

Dead Rhetoric: You are based out of Austin, which is a musical hotbed. How has that shaped your sound?

Voohries: Mike’s from Chicago originally but the general concept of our sound, which we refer to as post western, has hints of the Texas geography, cultural lore, etc. associated with it via the spaghetti western influence. I’m originally from Central Texas and growing up in Austin and the surrounding hill country has greatly influenced me personally in my development both musically and otherwise. Strictly within the group context, it’s a great place for us to have developed just by proximity of our many colleagues and home venues that we frequently work with. We have lots of friends in many excellent bands and it’s a community we’re proud to be a part of.

Swarbrick: I don’t know if it has shaped our sound at all but it does have an effect on our work ethic. Being in a town where everyone is a musician forces you to be on your A-game and to operate with a level of professionalism.

Dead Rhetoric: What’s the songwriting interplay like between the two of you?

Swarbrick: I write all of the melodic material and I let Adrian have free range over his parts. Sometimes that can lead to fun interplay.

Voohries: Mike will usually flesh out a basic idea on bass guitar and present it to me – we’ll work the concept and explore a few different results. Once we have a loose structure, he’ll figure out the synthesizer and tubular bell accompaniment. I’ll compose and refine my parts further and then we’ll have a basic draft to ride on for a bit. After that, there’s usually further tweaking that goes on after the first few performances. Some things change even further along after that. And there’s certainly bits of improvisation that vary from performance to performance as well to fit the given scenario at hand.

Dead Rhetoric: A lot of bands forsake the visual element for the music and vice-versa. Where do you draw the line with Cortege? And, how much work has gone into the comics created by Dan Marschner?

Voohries: The visual element is definitely important to us. With our music being categorized as cinematic so often, we’re slowly moving towards incorporating a visual component to the live shows in a big way. With the recordings, the merchandise and the artwork we tend to lean towards lush imagery and illustrations that exhibit the scenes we imagine when composing the music – that sort of retro-futurism, western culture in a different universe style.

Making the video for “Horizons” was an awesome experiment in really diving headfirst into that world and working with Kat (Albert, director) to try and visualize what we could while keeping our sort of trademark minimalist look. I’ll definitely agree that it’s important not to sacrifice any musical component for the visual or the other away around, but I think one of our next big steps will be figuring out how to properly present a unique cinematic accompaniment to the music in a live setting and having that be a staple of the tours. It was a rather sad situation with the comic book because while we’ve loved working with Dan and his very unique style, the original artist, who lived in Italy, passed away while working on it. We basically had to start from scratch at home months behind our deadline. So an extraordinary amount of work has gone into producing it and we were very fortunate that Dan was game to rise to the challenge.

Swarbrick: Since the music is instrumental, there is nothing to direct the listener except their own imagination. The elements of our sound go a long way but I would like to go further with a visual aspect. This is the first time that we’ve worked with Dan. He is still working on the comic. The amount of detail that is on the finished pages is astonishing. The finished product will be worth the wait.

Dead Rhetoric: Was it a conscious decision to have each album cover have the same format with the band name and musicians at the top?

Voohries: Absolutely. That sort of continuity is important to us and can be found in the music as well. Another pattern in the format for the records — a dedication to a rhythm section that has proved particularly inspiring to us can be found on the back of the albums.

Swarbrick: In regards to the layout of our albums, I was inspired by [former Kyuss drummer] Brant Bjork. His early albums have a similar layout.

Dead Rhetoric: Surely a common question for you: Will vocals ever make their way into your sound?

Swarbrick: I did sing on the track, “Occultation,” but it ended up getting buried in the mix. I would like to add a choir to our music down the road. I don’t think singing with lyrics would fit the music, maybe some spoken word stuff. It’s difficult to say.

Dead Rhetoric: How does the live environment influence Cortege in the studio?

Swarbrick: Over the past couple of years, we’ve gotten pretty comfortable playing together. We know when to give each other space. We like to record the bass and the drums live. That way we are able to have interplay and work off of each other’s dynamics. All of the keyboards come afterward to add to what is already there.

Voohries: It’s definitely a subtle breath exchange and it changes ever so slightly show to show – working that closely and listening that intently to one another. That sort of interplay and exchange translate to the recordings and it’s a mark of the show in the live forum.

Dead Rhetoric: The tubular bells…what is the strangest reaction you’ve received to them so far?

Swarbrick: A drunk girl in Tulsa knocked them over into a window, that was pretty strange.

Voohries: Besides the Tulsa window incident, the reactions are exciting but not so strange. Occasionally people will refer to them as a glockenspiel which is always hilarious. Mostly just wide eyes and “how on earth do I mic this thing?”

Dead Rhetoric: What’s the dream recording scenario for you? To record a movie soundtrack?

Voohries: That would be a very exciting project and we hope to move into the scoring world someday. Besides that, I think working with a technically adept and seasoned mind like Albini’s would be a dream come true. I would also love for Cortége to work with Markus Reuter, who I did my first record with playing in Humut Tabal. He’s been recording and performing at a prodigious rate recently. I think he’s about to leave on the Devin Townsend tour. But his taste for atmosphere is unparalleled and working with him again would be amazing.

Swarbrick: I could imagine it’d be really fun to record at Electric Audio in Chicago. We’d love to score a movie, one of these days we’ll venture down that road.

Dead Rhetoric: What’s next for Cortege?

Voohries: We have some new material that’s already recorded and its release will be tended to once we get home from this tour. We can’t say much for now but we’re quite proud of the songs and we’ll be working with some great folks to put it out. We’d also like to try and hit the festival circuit next year and as previously mentioned, we want to try and experiment with different ways to enhance the visual element of the live performances. That was something a lot of people inquired with us about on this tour and it’s got us cooking up some ideas.

Swarbrick: When we get back from tour, we’re going to finish postproduction for a split record. More tours, local shows, work on new material. There’s no reason to slow down now.