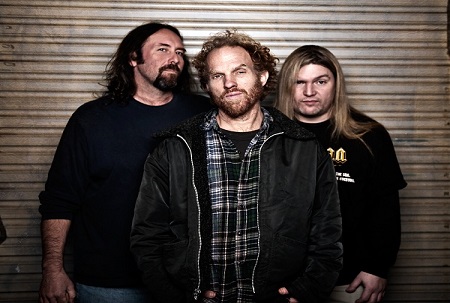 There’s so many layers to Corrosion of Conformity’s career that delving into it might take a few days, and we don’t want that. Rather, it would be prescient to reminisce about the band’s brief flirtation with commercial viability in the mid-90’s, a short period of time that popped out ’94’s Deliverance and ’96’s Wiseblood. Said albums spawned a radio hit (“Clean My Wounds”) and a prime opening slot on Metallica’s Load arena tour in ’97, so obviously, things were on the up-and-up.. Fronted and guided by singer/guitarist Pepper Keenan, COC’s bread-and-butter was fairly accessible Southern metal with a wry lyrical bent, one that eschewed the hard-on political salvos that helped launch the band in the 80’s. For a time, it worked like a charm, but the abomination that was the golden-ring-grab of 2000’s America’s Volume Dealer ruined everything. From that point, COC was never quite the same.

Not counting 2005’s moderately enjoyable “return to form” In the Arms of God, COC’s spark has returned with this year’s self-titled album. It’s a biting homecoming to the band’s punk/metal roots, with the Animosity-era trio of Mike Dean (vocals/bass), Woody Weatherman (guitars) and Reed Mullin (drums) throwing down like it’s 1985 all over again. It certainly strikes from all angles, with raw metal riff-action and Dean’s spot-on vocals (dude can sing his butt off) holding court on raging jams like “Psychic Vampire,” “Your Tomorrow,” and “Leeches.” And for comparison’s sake, the album makes America’s Volume Dealer practically irrelevant…without Keenan, COC is infinitely more vicious.

The relaxed and wily Dean phoned Blistering to wax on the band’s reformation, life without Keenan, politics, the “glory days” of the mid-90’s, and much more. Here’s what transpired between us and the now re-acclimated frontman…

Blistering.com: When the touring cycle for In the Arms of God ended, and Pepper went back to Down, did you think that was the end of COC?

Mike Dean: I wasn’t really sure. It was always in the back of my head that it could be over with, so it wasn’t a shocking possibility. I was hopeful we could get it back together and do something, although we did start another band called Righteous Fool. I just kept the matter open, basically. I wasn’t counting on anything, basically.

Blistering.com: What did you do with your time other than Righteous Fool?

Dean: Just working, bought a dilapidated house to fix up. Nothing else [laughs].

Blistering.com: Did you stay in touch with Reed and Woody during your time away from COC?

Dean: I was in touch with Woody quite a bit because originally we were writing songs with Jason Patterson who played a lot of the live dates for In the Arms of God. I really didn’t get back in touch with Reed until about four years ago, and that’s when we started to play again.

Blistering.com: There’s quite a bit of history with the three of you, going back to the mid-80’s. What was the determining factor in moving forward with this incarnation of COC?

Dean: Who knows, the generic answer is that Pepper mentioned he had some offers from people to get back together and play a couple of festivals in Europe. It sounded like a good idea. It was exciting to get him and Reed back together and it would be a fun thing to do, but then it turned it out we wouldn’t be able to do it because of Down’s schedule. At that point, we thought, “Why don’t we do a three-piece?” We could write some new songs so it won’t be a completely nostalgia-based appeal and we could play some shows, and probably, we could do an album if there was some interest. We had the idea, and two years later, here we are.

Blistering.com: Being that you spent so much time in the 90’s and 00’s as a four-piece, was it hard to get back into “trio-mode?”

Dean: It was pretty easy. In terms of the songwriting, it was a little easier. Everyone has more room in which to play, more ideas. We gave everyone more of a chance in which to contribute. We have a lot of material, a lot of ideas so it wasn’t challenging. I guess the challenge is not to go crazy in the studio and manufacture a lot of overdubs you wouldn’t be able to pull off live. You can do it in the studio, but it can’t be the main feature or people are going to be really disappointed. We had to stick with the idea that it would be sparse, but that came part of the fun of it.

Blistering.com: The album definitely has a stripped-down feel to it.

Dean: It’s raw, but it’s really clear. Part of the idea was to make it really clear by virtue of not making it cluttered. When we started writing the songs, conceptually, we weren’t that calculating. We tapped into a vein of ideas and went to work, fleshing them out a little bit. We didn’t always come up for air for a while to get perspective on things until we had quite a few songs written. Then we were happy to see that they were working pretty well.

Blistering.com: You’re singing once again. How does it feel to be manning the microphone?

Dean: It’s fun, but a little bit daunting to make sure you can do it every night on tour. It takes a little bit of preparation. I feel like I’m doing it better than I used to, and a lot of that was influenced by watching Pepper in how he approached it and how he had to prepare. Not doing it for a while really helped me and watching someone doing it on a high-level for so long with high expectations. If you’re in the studio, you can do it again if it doesn’t sound good. But live, there you are, there’s your one chance [laughs].

Blistering.com: For a while, COC went away from the political leanings you had in your early days and the Blind album. For this, it seems like you went back to that.

Dean: I feel like we come around those things in a “long way around” kind of thing. The other thing I feel influenced by working with Pepper is that a lot of his lyrics are very vague, but it’s intriguing and draws the listener in. Everyone’s interpretation is not the same, but sometimes you get an idea what he’s hinting at…you’re not really sure. I like that and I thought that makes for more enduring songwriting that lasts longer than something that’s more direct. There is some political content that could be considered socio-political. A lot of that is trying to keep it interesting and vague, so it’s not disposable. There’s a few exceptions, like “Your Tomorrow” is direct. We’re not trying to be a political band. We’re musicians and I’m not sure our “expert analysis” is really in demand [laughs]. We are opinionated people, but if it does come up, we try to do it in a way that’s interesting and spread it broader so it can be enduring and perhaps resonate at a later time or [about] something we’re not aware of. Plus, there’s some lyrics about the psychology of power and greed, things like that.