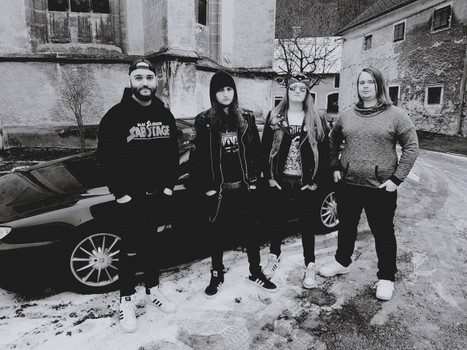 Another Bandcamp discovery, Austria’s Chainbreäker mince no words or lose focus at their thrash attack. Their affinity for the US and German bands of the 1980’s makes for a speedy, ferocious cocktail – full of riffing, gang choruses, and speed as well as those key shifts to get audiences banging their heads or throwing themselves against each other in aggressive maneuvers. Wasteland City is the quartet’s debut full-length, delivering ten tracks of ripping material – from the opening drum/guitar salvo of “Merciless Eyes” on through the closing, chunky Exodus-like riffing of “Acid Attack”, there’s no mistaking what you’ll get, no commercial aspirations on the horizon, just pure thrash the way it was originally intended back decades ago.

Feeling the need to investigate more behind these gentlemen, we fired off a series of questions to lead vocalist/guitarist Christoph Ley and fellow guitarist Stefan Bruckner. Prepare to learn more about the origins of the band, live performances, challenges they face as an independent band, as well as their views on old school/new school thrash.

Dead Rhetoric: What can you tell us regarding your childhood growing up and first memories surrounding music? How quickly did you end up moving into heavy metal music, and eventually the desire to pick up an instrument and start playing in bands?

Christoph: Jan and I already made music together in our childhood days. We were standing in Jan’s living room jamming out, myself on guitar and Jan on bass. We all got into metal when we were bout 12 or 13 years old. A few bands that got us into metal were Iron Maiden, Motörhead, Black Sabbath, Judas Priest, and Metallica and then we got into more extreme stuff like Exodus, Kreator, Sodom, Destruction and so on.

Dead Rhetoric: Can you inform the readers about the formation of Chainbreäker in 2015? And did you know straight away the type of thrash metal you wanted to develop, or was there a feeling out process to come to your style?

Stefan: Luke on vocals and myself on guitar founded Chainbreäker somewhere in the spring of 2015. We just met up to drink beer and write riffs and lyrics every Saturday. In the summer Christoph joined the band as a second guitarist. He already knew Jürgen and Jan and brought them into the band a few months after and in November 2015 the lineup was complete. After the release of our demo/EP Awakening of Evil Luke left for personal reasons and Christoph took over vocal duties additional to his activities as a guitar player, and since then we operate as a four-piece. When the band was formed, we knew that the music should be fast and heavy, but we didn’t have a particular plan on how the band should sound. The style we play now was developed by the influences of all the members.

Dead Rhetoric: Your first EP Awakening of Evil hit the streets in the summer of 2016. What can you tell us regarding those recording and songwriting sessions, and how do you feel about the overall acceptance from the critics and fans of this output?

Christoph: We recorded Awakening of Evil with Jan’s Dad in their basement, which is the reason why the guitars don’t sound as thick and heavy as we wanted. The six songs for the EP were recorded in one weekend, with some overdubs made a few days later. The demo actually got pretty good feedback, although we were not 100 percent satisfied with the sound.

Stefan: The songwriting for Awakening of Evil already started when the band was only Luke and myself but continued throughout Christoph’s entry in the band, who contributed a lot of ideas as well. The arrangements of the songs were made by all members together.

Dead Rhetoric: Wasteland City is your latest full-length album – consisting of five songs from that EP plus five newer songs. Where do you see the differences between that first effort and this newest record? Is there any specific reason why you included so much previous material again on this album?

Stefan: The main difference is that now Christoph is on vocals and his vocal style is quite different compared to Luke’s and the songs all got faster through a lot of practice and playing live. In addition, we were- as mentioned before- not really satisfied with the demo’s sound. We wanted to do those songs justice and record them with the sound we originally had in mind and Christoph’s vocals on it.

Christoph: Differences compared to the demo are also that we developed a style with gang shouts and the newer songs are more complex and difficult. Our newer song ideas don’t just follow a simple verse- chorus- verse- chorus pattern.

Dead Rhetoric: What qualities to you make up the ultimate thrash band in your eyes? Do you believe that cover art, stage names, band logo, band looks, etc. also add to the energy and outlook of Chainbreäker?

Stefan: The main thing is, that the riffs have to be killer. They can be fast or mid-tempo but they have to be heavy and catchy. All the good thrash bands out there write riffs which you hear once and you can never forget them again. Of course, good and fast drumming is a must and we like to hear the bass come through in the mix.

Christoph: We don’t dress up before we go on stage or anything like that. We just wear the clothes that we also wear on the street which is pretty much the 80’s thrash style with leather jackets, hightops, chains and so on. Of course, the appearance of a band matters, but we like to focus more on the music than on creating an image.

Dead Rhetoric: How would you describe Chainbreäker when it comes to your live performances? What do you hope to get across to the audience, and can you tell us about some of your favorite shows that you’ve done to date?

Christoph: Out stage performances are very active and full of energy, with a good amount of violence. We don’t like an audience that just stands there, we wanna see movement in the crowd and we would rather play in front of 30 maniacs with some violence going on than in front of 150 people who are not so into it.

Stefan: The top three shows we played were the release show of our new album Wasteland City in our hometown Linz, a show in Munich, Germany with Game Over, Released Anger, and Battlecreek and a small show in Burglengenfeld, which is a one – horse town in Germany, but there were like 30-40 maniacs there who made the show unforgettable.

Dead Rhetoric: What do you think are some of the challenges that take place for a band currently at your level, working on a self-financed, independent basis?

Christoph: The challenge is, that we have to do it all on our own: booking, distribution, we have to search for companies which produce CD’s and merchandise, and we have to pay for producing CD’s, merch, etc. It’s not always so easy but we actually like to do this kind of work because we are all really dedicated to this band. Concerning the financials, we always look to make no deficit because the whole band is financed by ourselves, but we know that we won’t make big money with this kind of music.

Dead Rhetoric: Do you believe you receive a proper level of support from local Austria audiences – and how is the metal scene in your country these days? Who are some other bands that our readers may want to look into and investigate from the thrash genre – or other metal genres?

Stefan: First of all, shout out to our homies who are always with us at every show we play. Most of the time the audiences in Austria are great, but it depends on the location, event, the slot you play, the other bands you play with and so on. In our hometown Linz it feels like the scene is getting bigger again these days, due to a great row of concerts called “Steel City Sorcery”. These guys are doing a really good job bringing great underground bands into our town and bringing the scene back to life. There are some great Austrian thrash bands you should listen to: if you like evil thrash you should give Deathstorm a listen, if you like to party listen to Insanity Alert. Then there are bands lie Enclave, Mortal Strike, or Tulsadoom and if you are into raw Black/Thrash you should listen to our dudes from Prediction.

Dead Rhetoric: Who are two or three bands that you admire and want to model possibly your career after for Chainbreäker – either because of their musical output, or way they carry themselves professionally?

Stefan: We don’t really want to model our career after other bands but of course we have our heroes that we admire. We really love Motörhead, their music as well as their attitude. Lemmy never gave a fuck about other’s opinions and carried this band until he died. He is God.

Christoph: Concerning musical output we like the classic thrash bands, of course: Exodus, the old Kreator stuff, Sodom, Anthrax, the first four Metallica records. I could continue forever. But we also respect and like newer thrash bands like Havok with their incredible musical abilities, Suicidal Angels for bringing back the old school thrash style and also bands with straight style and raw sounds like Toxic Holocaust.

Dead Rhetoric: Where do you see the major differences when it comes to older versus newer thrash bands? Do you believe that the newer bands have a slight advantage in terms of diversity because of all the outside influences now at their disposal given the internet and exposure to limitless music possibilities?

Stefan: The internet has advantages and disadvantages. In these days, you can spread and distribute your music with the internet very easily. But because of that, there are so many bands out there nowadays and it’s impossible to keep an overview. We think it’s not always an advantage that there is unlimited music online. We all like to buy CD’s and vinyl because you listen much more mindfully to a record if you buy a physical copy than just streaming it on Spotify.

Dead Rhetoric: How does the band handle the responsibilities relating to your music while also trying to sustain a living through jobs/career/school and family/relationships? Do you see yourselves down the line making this a full-time career, and if so what sacrifices have to made to accomplish that goal?

Christoph: We all have regular jobs and this band is a passion, but not a job. It’s hard enough to find time to rehearse and to play shows anyway, if everyone in the band has a totally different job and different working hours. Of course, you can dream about making this a full-time job, but that this point, it’s not realistic.

Dead Rhetoric: How do you see the rest of 2018 looking for Chainbreäker in support of the album? Has work already begun on the follow-up – and if so, will it continue in the tradition of Wasteland City?

Stefan: We already have some shows planned, including supporting Night Demon in September for three dates in Slovakia and the Czech Republic. We will also play a show in Ljubljana, Slovenia in June- stoked to play shows in countries we’ve never played before! We’ve already got one new song written and plenty of riffs/lyrical ideas/ concepts… so there will definitely be a follow-up and I don’t think that we are going to change our style drastically. We just focus on writing good songs, so it will definitely sound like Chainbreäker. 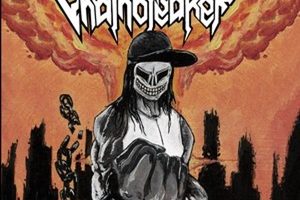