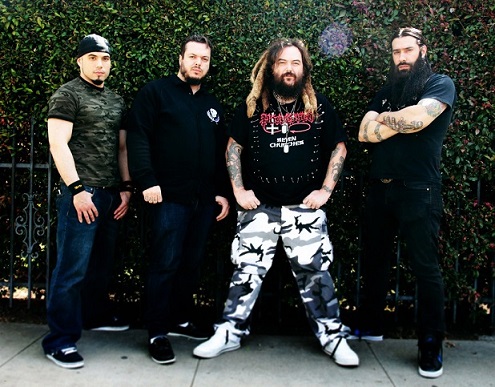 Destined to be Internet fodder until it actually happens, the clamor for a reunion of the “classic” Sepultura lineup won’t go away. As long as both parties keep talking about it (and pesky journalists continue to prod…like Blistering), it’s going to be an annual serve-and-volley between the existing Sepultura lineup and the Cavalera camp. Chances are, they’ll reconvene at some point, but at the present time, it’s nothing more than needless speculation, especially when Max and Igor Cavalera are making albums as strong as this year’s Blunt Force Trauma under the Cavalera Conspiracy moniker.

Wisely making a play for the sound of Sepultura in and around 1989’s Beneath the Remains and 1991’s Arise (more on that later), CC goes for the jugular onBlunt Force Trauma, with Max roaring like a lion, and pounding, brutal jungle thrash being the point of focus. There’s several crushing moments to be found, specifically during lead single “Killing Inside” (check out Marc Rizzo’s leads – they’re killer), the feisty “Warlord,” and slicing “Thrasher.” Moreover, it’s cool to hear legitimate metal, regardless of style coming from Max, not the often half-baked and experimental material he’s so concerned with doing in Soulfly.

We snagged Max on a Thursday afternoon to discuss Blunt Force Trauma, and how it stacked up next to the band’s debut, Inflikted. Invariably, discussion would spill over to Sepultura, which was fine – yours truly used to be a card-carrying member of the band’s fanclub (the aptly-titled “Troops of Doom”) in the mid-90’s. Nevertheless, Max was his usual open and talkative self, so we pressed the record button and off the legendary Brazilian went…

Max Cavalera: Yeah, we were really excited. We wanted to do a continuation of the band and we liked what we did with Inflikted. It was a really well-received record and we were really excited to create the second part of the Cavalera Conspiracy idea. We started to get the riffs and ideas for the album and then I sent them to Brazil for Igor to hear, and he called me back and said he loved the stuff and was excited to make the second record with me. We met up in a studio in L.A. and the album didn’t take that long to record. It was pretty fast, actually.

Blistering.com: You and Igor must have some type of instinctive thing still going on.

Cavalera: It is kinda instinctive. He knows the way I make my riffs and he’s comfortable with it. I know what kind of drumming he’ll put on it, so when I write the riffs, I have his playing in mind, that he’ll put killer drumming on top of it. When we get to the studio, we don’t have to say anything…we just start playing. Right from the beginning, from the first day, the first song we wrote was “Torture,” and the beginning of the record was all fast songs. When we started the project, we had this Reign In Blood/Minor Threat state of mind, with fast shit. Nobody is doing fast shit anymore, so we wanted to go back in time with this record. It was fun, it was a blast…like being in the late 80’s. Halfway through, I looked at Igor and said, “We need to do more than fast songs.” So I had these killer groove songs that I wrote like “Killing Inside,” “Genghis Khan,” and “I Speak Hate,” which is more of the mid-tempo, Max and Igor stuff that people knew from Sepultura like “Desperate Cry,” “Dead Embryonic Cells,” – that kind of signature groove that we have. When you put together the thrash stuff with the groove stuff, to me, that’s what makes the album interesting, when you have both elements. It creates a perfect album for me.

Blistering.com: Igor’s drumming today as compared to 20 years ago onArise – what’s the difference?

Cavalera: He’s much more mature now. In the beginning, he was trying to do a lot of fills and maybe do too much, trying to impress. Nowadays, he doesn’t have to do that. He kept it really simple on this album – one of the things he wanted to do was kept this primitive, basic aspect to it. For musicians, it’s a really hard thing to do, especially drummers. They try to fill in every second, put in tom fills, extra stuff…it’s like drummer’s form of playing, they do it naturally. Igor was like, “I don’t want to do that.” And I think he didn’t – there’s a lot of basic drumming on the record, and I think it’s very cool to do that, especially when he’s been drumming one way for 20 years. He did a great job.

I think he’s a great drummer…when he sits on the drums, he makes it sound like thunder. It could be a complete piece of shit drum set…he transforms it. I’ve never played with anybody that could manage that. I’m very lucky to play with him. He’s the creator of so many beats that people have ripped-off through the years. The things he did on Chaos AD was ahead of its time. The “Territory” drumbeat…all of it was original and awesome. It’s fun to play with him.

Blistering.com: How about Marc Rizzo? He’s become quite the ace-in-the-hole for you not only in Cavalera, but with Soulfly as well.

Cavalera: Marc’s great, on and off the stage. He’s a great person; I’m real good friends with him. I see him progress – he plays a lot, eight hours a day, always has the guitar in hands, always practicing, wanting to improve. When I gave him the chance to be in Cavalera Conspiracy, I think he was really happy because he was already in Soulfly with me, but this was a new avenue for him. I told him Cavalera was going to be crazy and heavier, so we could go really crazy on the metal stuff that he loves. His favorite stuff is Arise and old Slayer, Exodus, old Pantera, the classic stuff. Being in Cavalera was a chance to do that, go back to that sound. It’s great. I couldn’t think of a better guitar player to play with and I think little by little, people are discovering his talents. And I don’t think he’s blown-up yet to the point where people are overwhelmed. He’s like our secret weapon. I give him a lot of freedom in the studio. I’m not even there when he’s in the studio, I go back to the hotel, then check out what he did the next morning. He always surprises me in a good way. I don’t need to be like a boss sitting back there and watching him work…I leave him totally alone.

Blistering.com: You’ve done quite a few albums, so I wonder if you still have things left to say. Where does it come from?

Cavalera: I get creative…I love playing music and writing songs. It’s one of my favorite things to do today, and it’s fun as it was 20 years ago. I like to see the song coming to life, I like to see a subject and a grab a name that hasn’t been used before like “Genghis Khan,” which is cool that I got to do something with his name. Or like “Jeffrey Dahmer” on the Omen [Soulfly] album, it was a really off-the-wall topic, I was up to do it. I keep creating ways to challenge myself and I think there’s a lot more to come. It’s like a never-ending struggle. To me, there’s always better music to be done. To me, the best has not been done yet even though there are a lot of classics like Soulfly I or Roots and Inflikted; those are all really cool records, but I don’t live in the past. I feel like the next one is going to be the one.

Blistering.com: Speaking of the past, Arise is now 20 years old. Does it make you feel nostalgic? Proud? Old?

Cavalera: Nah, I’m proud of it. It was a great achievement. It came at a time when everything was new to us. It was the first one where Roadrunner flew us to America to record at Morrisound with Scott Burns (Morbid Angel, Cannibal Corpse, Death). It was a new studio, totally closed down for us. It was the first time of doing an album the right way, because even Beneath the Remainswas done at night, at one in the morning. I also see the evolution from Beneath the Remains to Arise you can see the band went a step ahead on the songwriting and became better. It was cool to see the band going forward and everything went up from that. Now it’s 20 years later and I’m still touring and making records. I’m really proud of everything that has happened; I don’t have any regrets. I’m super-proud of Soulfly because it started a whole new thing for me. It gave me a chance to do something that I probably couldn’t have done with Sepultura. The way that I do Soulfly is very different in terms of freedom musically; I have more freedom than I probably would have had I stayed in Sepultura, so I’m really blessed with that.