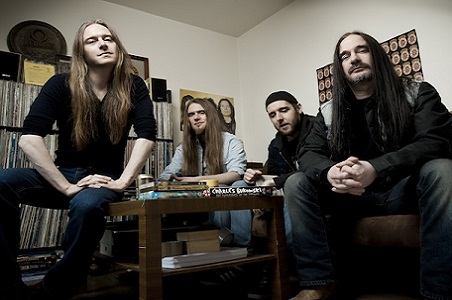 Dead Rhetoric: Which was Mike and Daniel [Erlandsson, drums].

Steer: Right, and as much as I love those guys, we couldn’t have made the album we have now with that lineup.

Dead Rhetoric: Any of those big names, did it get as far as rehearsals?

Steer: No, it was all talk. I’m just very pleased with how things turned out. It feels like group instead of four disparate personalities.

Dead Rhetoric: You and Jeff probably couldn’t be happier with the current setup.

Dead Rhetoric: I hope I didn’t jinx this lineup…

Steer: [laughs] That goes back to the never-say-never thing, but, I can’t foresee anything. We are really quite happy with things at the moment.

Dead Rhetoric: You did some headlining shows here last fall, so, was that a nice way to feel the market out before doing the Decibel tour?

Steer: Yeah, but we looked at them as a good way to generate a little bit of hype for the album. We did three consecutive club shows in London earlier in the year, and they had gone really well. We wanted to do something similar in the States. That’s the ultimate live environment – playing a small club. You can tell instantly if something’s working or not, and the audience can’t really be fooled in the way they can in a larger venue. When you’re up close and personal, the energy is so different.

Dead Rhetoric: Any issues with coming with the setlist? Of course, you have Heartwork and Necroticism to work off of, but you also have the new album, the first two albums, and…Swansong.

Steer: It’s not really a problem as such, but we spent time putting together a set that represents the different eras of the band. Of course, we want to play as much as we can off the new album, but realistically, it’s not going to be more than three or four numbers because we have a whole catalog of older music and every record has to be represented, even going back to the first one. We’ve done our best. Not everyone is going to be satisfied, but generally speaking, it’s going to be a fairly balanced set.

Dead Rhetoric: You’re not going to be able to please the guy down front yelling for “Child’s Play,” though.

Steer: No, and that song has been mentioned and I’d love to try it one day.

Dead Rhetoric: Ah, you have to! The second riff in that song is one of your best.

Dead Rhetoric: You did a headlining run here in 2009 for the reunion. In contrast to this tour, how much different is the level of expectations?

Steer: I think it’s safe to say that it’s going to feel different. It’s a different band. Everything feels current because we have an album out, so there’s a future, even if it’s a few months, it’s a much different vibe than going out and playing just old material. I prefer this, because I like to feel like whatever I’m doing is going forward in some way.

Dead Rhetoric: With the reunion lineup, there was always this “What if?” With this lineup, you are building toward the future.

Steer: I like to think of it like that. I don’t like to look too far ahead, but we’re busy now and will be for the near future, and we’d certainly like to do another record if we’re able.

Dead Rhetoric: I read a quote from you, and this is not verbatim, but, you said you were the last one onboard to do a new album, and, you never knew the next city in which you were playing. You were just going with the flow. Is that still the case? Are you taking a more hands-on role?

Steer: Only slightly…with that quote, it’s probably a good example of how in print, things can read a little differently. [laughs] With regards to the album, yes, I was the last person to be convinced when we were reforming the band. The other guys were much more clued-in with regards to the amount of interest in Carcass, and that’s why I was the last one to get onboard. I was ignorant about it, but once I was onboard and we started practicing, I really felt the natural urge to start working on new material, but it was shot down instantly because it was clear the other half of the group really couldn’t do it. It’s understandable, because it would have caused havoc for them, trying to stay in two very active groups. But yeah, that was really the thing for me. It was a case if I’m going to do this, I’m going to do it fully. It did feel a bit odd doing it almost as a nostalgia trip. It was very fun to do, but I really missed the sense of something and having a future.

Dead Rhetoric: That had to be tough, because in one corner, you had Jeff who was always pushing you to write new material. Then you had the other two guys, so that put you in the proverbial between a rock and a hard place.

Steer: It wasn’t a really situation where the four of us would discuss much as a group. Privately, Michael had stated…I can’t remember if he said he couldn’t picture or believed the band shouldn’t do a new record. But, I thought “That’s nice of you,” to be honest, but I felt maybe the founding members of the band would have to make that decision.

Dead Rhetoric: The album cycle for this, is this going to be one of those cycles where you’re touring for several years?

Steer: I don’t know the answer to that question. We have loads of stuff booked until September, and there’s plenty of offers coming in. I’m hoping that maybe, toward the end of the year, the last couple of months, that things slow down and we get the chance to work on some new ideas. If we are serious about attacking a new album, I’d like to get something underway before the year is over.

Dead Rhetoric: Are you sitting on any riffs?

Steer: [laughs] I have a lot of stuff left over from the past. We had to close the floodgates when we were writing for this record, there was so much stuff coming out that when we pushed it to about 15 tunes, we decided to focus on those and pick the best ones for the album. If we got to say, 20 tracks, it would get too difficult to chisel it down to an album.

Steer: It’s a life-long love affair with the riff. It’s very hard to figure out what makes a good riff. [laughs]