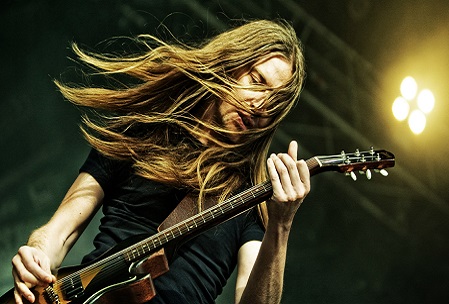 Carcass guitarist Bill Steer just seems like a cool dude, you know? Lanky (join the club), relaxed, hair a mile-long, and armed with an endless cadre of distinguishable riffs, Steer’s stamp on the band’s Surgical Steel comeback is what ultimately makes the album the success that it is. His melodic repertoire – never in question – is in full gallop, while those molten, tough-as-nails death metal riff solders burn as bright as they did over 20 years when Heartwork was released. Plus, he did it all by himself, without a natural and/or “recognizable” counterpart (see: Amott, Michael), making it all the more of an achievement. And to think, Steer spent most of the 00’s kicking around with retro rock…

So that’s where we began the chat with the easy-going Brit, who was gearing up for the band’s headline dates in North America as part of the 2014 installment of the Decibel Magazine tour. Steer’s days with Firebird may be over, but it’s a prescient reminder of how much time and work went into the creation of Surgical Steel. And while a bell-bottom, aviator-wearing Steer was in fact, cool, him steering the Carcass musical ship is far cooler…

Bill Steer: Yeah, I believed I was. I guess I was still carrying quite a lot of bitterness on how Carcass disintegrated, and yeah, I really wanted to start fresh. I wanted to do something different in a completely different setting, I guess so things could feel fresh again.

Dead Rhetoric: You’re coming off of Swansong and the other guys go do Blackstar, so did that leaving you feeling isolated from metal? And, was it natural to head in that direction?

Steer: I was heading that way anyway with my musical tastes at home. I was pushed even harder in that direction, especially in terms of what had happened with Carcass. The band, to me, was a failure. I certainly don’t look at it that way now, but, it just seemed to have become irrelevant very quickly and we’ve seen our…I hate to use the word “popularity” because it’s all relative, but whatever our following we had in the States seemed to decline quite rapidly. We’ve never been particularly popular in the U.K., it was a smattering of an underground thing, and the climate in metal was changing. You were seeing the beginnings of nu metal at that point, the sort of crossover with industrial music, hip-hop, all kinds of new technology. Speaking personally, I just couldn’t relate. It just pushed me away further in the opposite direction.

Dead Rhetoric: Around that time, though, is when the melodic death metal sound started taking off, with In Flames, Dark Tranquillity, and At the Gates, although they were on their way out. Did you have any idea these bands were starting to have success?

Steer: No, I was aware of the names, but even then, I didn’t keep up with the contemporary metal scene, so I didn’t know what the groups sounded like, or how popular they were.

Dead Rhetoric: Firebird split up two years ago – is it going to be one of those things where you leave it dormant for a while, then start it up when you get the itch again in five years?

Steer: Anything is possible. I’ve learned that. [laughs] I wouldn’t rule it out, but at the moment, I’m tremendously busy, and so is Ludwig [Witt, drums, also in Grand Magus] in Sweden. But, things can always change I guess…

Dead Rhetoric: We’re about five or six months removed from the new album. Now that people have had time to digest it, has it surpassed your expectations?

Steer: Oh, massively! We didn’t really have much in the way of expectations. It was too much to think like that, really. We put so much time and energy into writing and recording this record, that it was a big chunk of our lives. We were very focused, and part of that focus was not letting your brain stray away to where you’re going, “What would other people think?”

Dead Rhetoric: That was my next question, if that entered your mind when writing the album.

Steer: [pauses] It was incredibly similar to the way we wrote material in the older days of the band. We walked into the rehearsal room with a bunch of riffs and got to work. And, the parameters of taste we used back then are more or less what we’re using now, so you’re not hearing any modern influences creeping in. We don’t really like much modern music, so we wouldn’t want it to affect our stuff.

Dead Rhetoric: You mention the three guys in the rehearsal room banging the songs out, and that makes me think of Dan [Wilding, drums]. How beneficial was it to have a guy like that around during the whole writing process?

Steer: It really meant everything, because, okay, the guy is a drummer, but he’s not coming up with riffs. But what he is doing is making things very easy for Jeff [Walker, bass/vocals] and myself. Whatever I threw at him, he was able to deal with. He’s a really natural musician, so you don’t need to do much explaining for what you want for certain parts. He approached the songs in a very effortless, natural way to the riffs you put out there. And, further down the line, he started to come up with his own suggestions for arrangements and they were always really useful. He was a big factor for this record. It’s not just about how well he plays the drums, it’s also the kind of person he is.

Dead Rhetoric: I spoke to Jeff last fall before the record came out, and he said it was coincidental that some of Dan’s parts were Ken Owen-esque. Did you notice the same things?

Steer: Yeah, absolutely! I would agree that it was almost accidental because Dan’s listened to that music a lot, and I think he’s absorbed some of Ken’s style, but he’s not the kind of person to be contrived about it, like “I want to play this the way Ken played it.” It’s impossible; you can only be yourself behind the drum kit. I like the way he’s done this – he’s brought himself to the music, but with a healthy respect to Ken Owen. It’s ideal.

Dead Rhetoric: Ken was a unique drummer onto himself. Not very many guys pattern themselves after him, and vice-versa – Ken didn’t pattern himself after other drummers.

Steer: No, you’ve really said it there. He was a Laurent to himself. That’s why he was so creative – he wasn’t listening to other drummers, he had a very different taste in music.

Dead Rhetoric: The second guitar spot, which is filled by Ben [Ash] now, but Jeff had mentioned Jesper [Stromblad] from In Flames was a possibility. How far did that idea go?

Steer: It was, yeah. I think we were falling in line with what was expected from us. People were expecting us to hire a couple of big names, if you like. For a while, we bought into that approach, we thought, “Yeah, we have to get two very established players, but with not necessarily as long of a history as ours, but something similar.” That wasn’t to be. [laughs] We realized later it would have been a huge mistake because we can’t afford to get back into the situation we had a few years ago when there are two guys in the band who have a priority elsewhere.