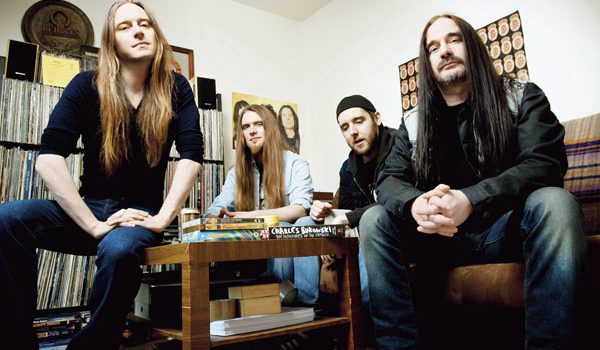 Dead Rhetoric: If we can go back to 20 years ago, what was the atmosphere in the band like? That’s when you were checked out of metal and got into ‘70s rock. Things were rough with Earache and Columbia, too.

Steer: The funny thing is that everyone assumes the final straw was us falling out badly, but it wasn’t like that at all. The whole band had fallen out with each other. Carlo [Regadas, guitars], I guess, he was such a newcomer, he was going to be on the fringes of what was happening. What I will say about him is, he contributed some really good stuff to that record. There’s one song that people always mention, “Blackstar,” and that’s entirely Carlo’s music. He was very good in that regard. But, needless to say, he didn’t have the history that the three other people had. I’m sure it was uncomfortable for him to be around it at times.

Dead Rhetoric: Like “I joined the band as it’s going down!”

Steer: Yeah…it was everything at once. The vibe in the rehearsal room was what really told me this band is on borrowed time. Ken, I don’t know, just seemed to be unhappy playing the music we were doing.

Dead Rhetoric: Are you referring to the songs for Swansong?

Steer: Yes. Maybe that was my fault. I was bringing in ideas that maybe were a stretch musically for our band. I don’t mean technically, like “That’s too rock and roll.”

Dead Rhetoric: People do refer to it as your rock and roll album, though.

Steer: For Ken, it was very tedious to play bar after bar of 4/4. He didn’t enjoy it. I was bringing in a load of ideas that were on the very cusp of what’s acceptable for a band like Carcass.

Dead Rhetoric: I’m 34 and it was the first Carcass album I got. I think it’s pretty good, especially if you’re coming into it without knowledge of what came before.

Steer: I’ve got friends who are in roughly your age group, their position is the same. They buy into this stigma about that record. Some of them think it’s our best record. Throughout our career, those few years of those early records, every time we did a new album, we were shedding fans as well as gaining. I can see it starting with the third record. Necroticism [Descanting the Insalubrious], a lot of people were like, “Ugh, they’re not grindcore anymore.” Nevermind the fact we never claimed to be grindcore anyway. We were following our own instincts. We did that record and it antagonized a few folks, then we did Heartwork, which at that time, was the record we wanted to make. We finally had the sound we wanted. In my opinion, it was the best bunch of riffs we had at the time. Sure enough, people were like, “You guys are a bunch of Def Leppard-loving faggots.”

Dead Rhetoric: Look at it today, it’s the template for so many bands.

Steer: We also get blamed for it, too. I’ve heard people call our band “melo death.” I don’t really know why because there was no such term when we did the record.

Dead Rhetoric: By then around Swansong, you were getting into classic rock and ‘70s rock. Was it hard for you to still be a part of the metal scene?

Steer: I was becoming more and more alienated. Part of that was getting older, because I think for a lot of us, your musical taste tends to solidify around your early ‘20s. I guess I would have been 24 or 25. I still enjoyed what we were doing, but I didn’t see a place for us in the metal scene. If I think about the bands that were riling people up and were getting attention, off the top of my head, a good example would be Fear Factory. It didn’t resemble what we were doing. We could feel ourselves getting marginalized. It wasn’t a surprise when the band collapsed. We had a few personal issues between us and musically, we maybe stretched it to a breaking point. There’s label crap…everything was telling us to break up.

Dead Rhetoric: Let’s try something different: I’ve picked a few Carcass songs that are off the beaten path. Tell me the first thing that comes to mind for each. Let’s start with “Doctrinal Expletives” from Heartwork.

Steer: That’s a tune I’m not sure we ever played live. I’m fond of it. There’s a lot of influences there, like one riff sounds like Helmet, then the next sounds like Tygers of Pan Tang.

Steer: A lot of people mention it; I must admit I wasn’t that keen on the way it turned out. There was a few songs on that record, after it was done and dusted, obviously it didn’t come out until we had broken up, once the dust had settled, there was some songs I remained fond of, like “Child’s Play” and “Tomorrow Belongs to Nobody.” It was one of the things I remember bringing in later thinking it wasn’t that good.

Dead Rhetoric: Then, “Child’s Play,” another from Swansong.

Steer: It’s a lot of fun. I think that was one of the few tunes where I actually came up with the riff in my head. I was living in central Liverpool and I was on a bus and I had the groove in my head. It was bugging me that much by the time I got home, I picked up a guitar and figured out how to play it. Normally, I’m like most guitarists – I pick up a guitar. Sometimes a riff is coming through, sometimes there isn’t. This was a completely backwards way of doing a tune. The rest just flows from there.

Dead Rhetoric: “Edge of Darkness,” which was an extra off of Swansong.

Steer: That was another I really liked. It didn’t make it onto the record, did it? If I remember correctly, we recorded 15 or so songs. I’ve been the first to bail out of the band, so the whole thing fell into Jeff’s lap, to get it out and complete it, sequencing and everything. If I’d stuck around and had a say in things, that song would have been on the record for sure. We still play some of that song live.

Dead Rhetoric: The new album. You mentioned you started some songs with Dan a few years ago. Are you going revisit those songs? Feasibly, what’s next for the band?

Steer: I think we’re done for touring, finally. It’s been a hell of a lot of fun, but there has to be an end to it. This isn’t the kind of music you can write on the road. When you’re doing a package tour like we often are, if you have any consideration for the bands you are playing with, you will get on and off as quickly as possible for soundcheck. We don’t tend to jam much; half the time we don’t properly soundcheck. A couple of people will check their bits and that’s it. The tunes that Dan and I worked on, I guess there’s about six in the bag. They need some refining. They always do.

Dead Rhetoric: Jeff has said he’s not in a rush, but maybe you guys are chomping at the bit.

Steer: A little bit. We’re looking forward to a rest after this. We all feel like it would be nice to tackle a new record and just do it right. There wouldn’t be a rush. We don’t want to put something out sloppy.

Dead Rhetoric: Surgical Steel is the all-encompassing Carcass album that will be difficult to top. Where do you go from there? What’s the direction going to be?

Steer: You’re right, it does have to be a step up from the last record. All I would say is there has to be small stylistic elements that haven’t appeared on Carcass records before. We’re going to be walking the tightrope of sounding like the band Carcass and bringing in new elements. There’s nothing valid to say if we’re going to do a retread…what’s the point? That was a very nice summary of our previous records. We updated all of the stylistic parts of those albums without trying. It just happened.

Dead Rhetoric: People would be happy with Surgical Steel Part II, though.

Steer: I guess with any scene there’s extreme conservatism going on. People almost want the music to stagnate, but it never can.

Dead Rhetoric: That’s nothing new for you, but back when you started out, you didn’t have the internet.

Steer: I’m lucky because I’m not on social media; I’m shielded from it. But the other guys are very much in that world. Just hearing about it second-hand, I find it exhausting. You can’t do an album by committee. Somebody’s got to be in charge. You’ll drive yourself mad if you think about what’s expected from your audience. How do you define that? It’s a bunch of individuals. Not everyone is the same. You got to stick with what feels good to you. I’m pretty confident that we’ve got a lot of stuff to offer. I’ve had bags of time to think it over: What did I like about the last record? What don’t I like? What would I like for a band of ours to deliver? If you’re going to be doing crushing music, it should be musical and have a groove and flow to it. It doesn’t mean it’s not extreme. I guess an aesthetic, really. Many people would feel differently, but you can make dark, ugly music, beautiful at the same time. That’s the kind of thing I’m striving for. We have to let nature take its course because there’s other people involved.

Dead Rhetoric: Is there a timeframe to release a new album?

Steer: We’ve got a couple of festivals next year, so in other words: an enormous amount of free time. Once we get started, we work very quickly, especially with Jeff. Jeff’s got a real work ethic, so we’ll have something we feel is in very good shape to play to him, then he comes in and critiques that. It’s just like a distillation process. Sometimes it takes a while for a song to reach a point where we’re all happy with it, other times, it happens on that day. I think we should have an album that’s available by the end of the year [2017]. But I know how the industry has changed…so if it’s not happening, it’s not happening. We can’t really rush this. We don’t want to waste anyone’s time, including our own by putting out something substandard.