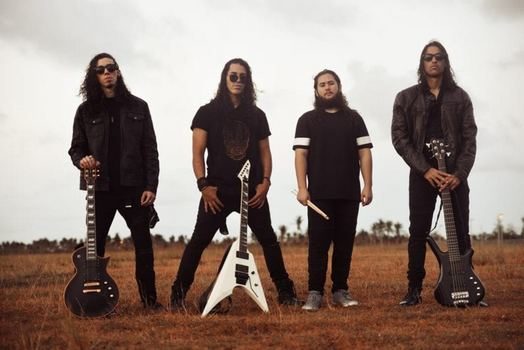 Puerto Rico may not necessarily rank high as a hotbed for a metal scene, but there have been some killer bands that generate underground interest over the years. Many moved to the mainland United States to make a bigger impact (Cardinal Sin moving to Massachusetts/New Hampshire, Puya to Florida as two examples), and sustain the interest of future generations to pursue their metal passions musically. Calamity are a thrash band from that younger generation – already attaining a decent buzz through their debut album Imminent Disaster in 2015, plus taking a DIY touring approach to hit the road stateside to support this record.

Their latest album Kairos moves things to that next level in terms of relentless power, aggression, and ferocity – yet adding in the proper melodic hooks and catchy mechanics necessary to cement songs like “Killer Vibes” and “Overruled” into craniums while incessant headbanging ensues. Seeking to catch up with the band, we reached out to guitarist/vocalist Berny Santos who was more than happy to fill us in on the developments of the band, what they feel they’ve learned most from their road experiences, as well as how Hurricane Maria has made Puerto Rico and the people stronger in the wake of that natural disaster.

Dead Rhetoric: Kairos is the second Calamity album. Where do you see the major differences in the band for this record in comparison to your Imminent Disaster debut from 2015? Were there any surprises, obstacles, or challenges that came up during the writing or recording process?

Berny Santos: The writing process of Kairos was a total beauty. We were constantly reaffirming the content on it. A lot of the lyrics for this album are about not giving up, about not fearing the change and embracing life just how it is. So whenever in doubt or in frustration we would just go back to the album and the meaning of it. We had a lot of complications and obstacles during the recording process of Kairos. But it came out anyway, that’s what makes it so special. To compare it with Imminent Disaster I would say we are the same band but with a bigger vision and a better preparation in terms of production, musicianship and the technical aspect of recording and album.

Dead Rhetoric: You decided to mix up the material between English-led songs and a few Spanish songs. Do you feel that international audiences are much more accepting of diverse languages within the metal realm more than other genres – and was this an easy or difficult decision to make for Calamity?

Santos: It was a huge decision to start using Spanish. We wanted to get as real as possible with Kairos. We wanted it to reflect exactly who we are and how we feel right now. Spanish is a great tool to achieve that honesty because it is our main language. People from other countries are digging it as well, sometimes they even prefer the Spanish songs to the rest of the album. That sounds like a win to us.

Dead Rhetoric: How would you describe the lyrical content within Kairos?

Santos: I’ll continue saying it is the truest we can get so far. If someone wants to know exactly how we feel and what we think about life and about what is going on around us they should read the lyrics. It is a very personal album, but we are pretty sure everyone can get involved with it as well. So I would describe it as the closer a human being can get to their core and their feelings. Happiness, sadness, frustration, love, anger, apathy, hate, optimism, pessimism. Everything can be found inside Kairos.

Dead Rhetoric: Can you discuss the artwork from Fulton Hoobs – what were you hoping to get across with this design, and are you happy with the final results?

Santos: We found Fulton in the right moment. We wanted (the cover) to be real pics but with fantasy on it. The gigantic planet clock was the only thing we had clear in our minds before talking to him, the rest of the composition was created in the process. We have no regrets on working with Hoobs, He is a talented guy and worked incredibly fast!

Dead Rhetoric: What can you tell us about the US tours and festival appearances that you did over the past few years – what do you think you’ve learned the most being on the road away from home that has helped the band improve and strengthen their style or outlook on the music?

Santos: Aside from the awesome training it is to play every day in a different situation with different challenges and in front of different people, I think the road makes you stronger as a person and as a band. When you spend a month or two away from home in a small van or truck with a bunch of dudes with different ways of thinking and different ways to do things you either dissolve the band forever or learn how to get along with your mates on a more personal level. That enhanced relationship will show in the music and in the live performance. The band reaches a new level after every tour.

Dead Rhetoric: What are some of the biggest challenges Calamity currently faces at this point in your career?

Dead Rhetoric: Who would you say are some of the biggest mentors or bands that you look up to – in the sense of respecting their work ethic, how they handle business activities, and their discography/output as a whole?

Santos: There is only one answer to that, and it has been the same since day one: Metallica. They are simply the biggest metal band in history and they still own a special/unreachable place in the music industry. I don’t know how someone cannot recognize and respect that. We do respect that and are not afraid to say it. Of course we have a lot of other local and international references. People we look up to and learn from them. Gojira, Lamb of God, Avenged Sevenfold, Puya (Puerto Rico), and Iron Maiden are big inspiration in terms of business too.

Dead Rhetoric: Hurricane Maria devastated Puerto Rico – how did this affect you and your families, and how is the recovery looking from your end of things? What do you think could be done better or differently?

Santos: I think we are all doing an awesome job getting our country back from Maria. We actually feel proud of Puerto Ricans after the hurricane and that is something you can feel and read in the new music. Songs like “Guerreros” and “Still We Live” are inspired in the hard time we had after María. The way we all helped each other and worked hard to recovery is something we will never forget.

Dead Rhetoric: What does heavy metal and thrash mean to you personally? What are three of your favorite albums that you cannot live without in the genre?

Santos: Metal is the way music flows out of us. It is not something we are trying to do. It is just the way it is. Funny thing is, we all listen to lot of different genres aside from metal. But when it comes to writing music, metal/thrash is just the way to go.

1. Metallica’s the black self-titled album is historically important for the band. There would be no Calamity without it.

2. Gojira’s Magma shaped a lot of the sound we adopted on KAIROS. We just love it.

3. Havok’s Time is Up came in at an important era for us and injected the right amount of modern thrash/Bay Area revival. Thanks to the guys from Havok, you are definitely important for the way Calamity developed.

Dead Rhetoric: How would you describe the relationships within Calamity – do you believe that friendships matter in the development of a band long-term? Are there special hobbies or interests that the members share outside of band activities?

Santos: We are best friends before bandmates, we are brothers before co-workers. The soul of the band is our friendship. We just love to do music together, dream big together and face challenges together. There are literally no other reasons to do what we do. I think that’s the most important part of a band and can be the key to success.

Dead Rhetoric: What’s on the agenda for Calamity over the next twelve months now that the album is out? 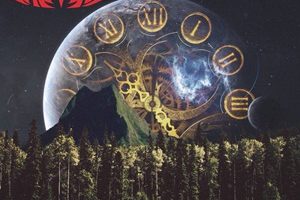 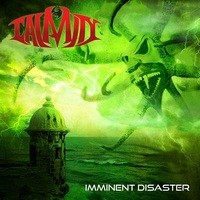