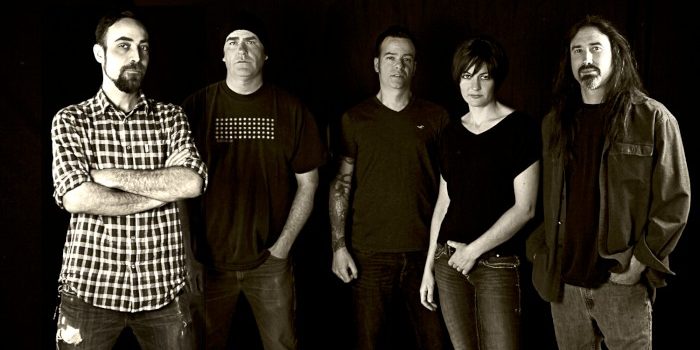 “Camaro rock” it is for Connecticut’s Buzzard Canyon, a decidedly desert rock-sounding band with killer male/female vocal interplay to boot. The band’s Hellfire and Whiskey is highlighted by bluesy vocal takes from Amber Leigh and the gruff angles of Aaron Lewis, putting a fresh take on a sound previously perfected by the likes of Fu Manchu and Kyuss. With this in mind, we felt the need to dig into the mechanics of a band who doesn’t sound like they’re from Connecticut, but we’ll let Lewis do the explaining…

Dead Rhetoric: We often associate the sound of a band based on their geographic location. You’re from Connecticut, but sound very desert-like. How did this happen?

Lewis: Desert rock and early 60s/70s rock has been a huge influence of ours over the years. When Buzzard Canyon first started years ago under the name of ThunderHoof, the idea was to do a rock band that had a heavy rock ‘n’ roll vibe in the way that Thin Lizzy or Motorhead would have done it. Not to recreate the wheel, but to do it in our own way. The first song I wrote for the project was “Highway Run,” which is a story about someone living in the desert and going on a heist with a partner, tearing through the desert roads, gun by their side, swigging whiskey and throwing caution to the wind. The whole concept just seemed to fit where the band was starting to head.

Dead Rhetoric: To that end, have audiences in your neck of the woods been receptive to your sound?

Lewis: So far the reception has been great. The crowds really seem to get into it with us. It’s all about having fun and letting loose. Every show we play, we play 110%. The crowds tend to feed off of that energy and give it right back to us. It’s been a ton of fun!

Dead Rhetoric: I watched some video of the band performing as a trio. When did you fill the rest of your lineup out? And, what made you bring in additional members?

Lewis: When we called it ThunderHoof, it was more of a power trio. Mike (guitarist for Buzzard Canyon) was playing bass with When the Deadbolt Breaks, and BC had been talking about adding another guitar. I’ve known Mike most of my life and we work so well together in WTDB, that he was the obvious choice to join BC. He’s an accomplished guitarist with a ton of unique style. After he joined, I met Amber. She sang a Patty Griffin tune for me a-Capella and it blew my mind. I had her come to my studio and asked her to do some vocals over the demo we had started recording and it worked. Our voices meshed so well that it just made sense. I played the track for the rest of the guys in the band and it was a mutual agreement that this was the way to go. Since then, we decided that this was the line-up.

Dead Rhetoric: Where did the term “Camaro rock” come from?

Lewis: This all goes right back to “Highway Run.” The vision of the guy drinking whiskey, charging through the desert roads in a Camaro, gun by his side, pumping his fist in the air to Judas Priest…we decided that THIS was our style of music. Our version of what the great rock bands did and do. Upbeat, fast, heavy, fist pumping, rock…put the cassette in the player, turn the key to the Camaro, crank the volume… and step on the gas.

Dead Rhetoric: Most bands that have male and female vocals don’t intertwine them the way you do. You pull it off rather well, but, does it pose any problems when composing songs?

Lewis: I have to give a lot of that credit to Amber. She has a very unique way of molding vocal patterns. On the record, some of the songs were written before she joined, so she was able to take what I had for vocal patterns and add her own spin to them in ways that I wouldn’t have thought of. “Soma’Bitch” was a song that she took from start to finish ran with. She is a powerhouse of a vocalist and I think the contrast between her and I has worked well.

Dead Rhetoric: Plus, a lot of stoner/doom bands tend to sound the same. But vocally, you’re instantly identifiable. Do you think this helps set Buzzard Canyon apart?

Lewis: Thank you again. I don’t know if we could consider ourselves stoner or doom. This is a rock band. Camaro Rock. But, yes, I do feel that our approach to our music and vocals absolutely sets us apart. Music is art, art is emotional and personal…if you’re going to be an artist, why would you do exactly what everyone else has done?

Lewis: Touring is always an adventure. Two short stories:
1.This summer we had the pleasure of doing a short tour up in to Canada for a few shows. It was a blast all around. Both of our bands went (When the Deadbolt Breaks and Buzzard Canyon), which meant that Mike, Dumas and myself were doing two shows a night, every night. What made this tough is that for both bands, we give all of what we have for every single show. As much fun as it was, it was exhausting. But… I would do it all again tomorrow if the chance came up.

2. Also, a few months ago we had the pleasure of playing up in Vermont in an old 1800’s church with Scissorfight, Cortez and Ol’ Time Moonshine. Seeing as it was close to Halloween, I decided to wear a legit priest outfit.After our set, someone came up and said that the show was great, they had a ton of fun… but wanted to know why the priest outfit I just looked at them, pointed up and said “We’re in a church man!”

Dead Rhetoric: A simple Q: What’s the most rewarding aspect of being in a band like Buzzard Canyon?

Lewis: BC is very rewarding but its hard to pin down one point.The music is fun and keeps it interesting, Matt, Dumas, Mike and Amber are some of the best musicians I have played with over the years and have become close friends. We are all on the same page, we do this because we love it. And that’s it.

Dead Rhetoric: Finally, what’s on your agenda in the final months of 2016?

Lewis: We have a few more shows on December 3 at 33 Golden in New London, CT with Summoner, Worshipper and Bedroom Rehab Corporation. And then we are ducking back into the studio to write and record some new material. As of right now, that’s the plan.