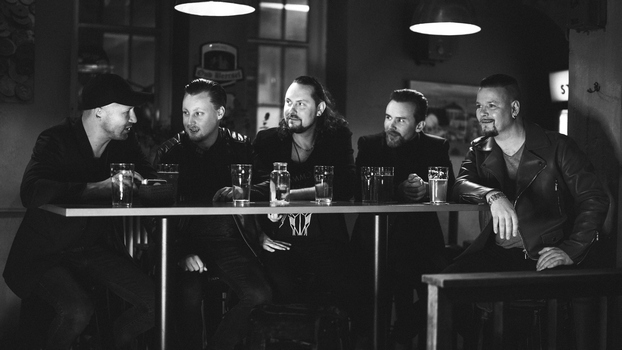 In the ever-chaotic times that we are in, sometimes it’s nice to check out an act that brings out some feel good notions that you can crank up loud and enjoy. Brother Firetribe has been delivering those fun, melodic rock elements for quite some time now. Feel the Burn marks their fifth release, full of anthemic rock hooks that are all but guaranteed to get your blood pumping and put a big old smile on your face. We fired off some questions to vocalist Pekka Ansio Heino to get his take on the band’s latest effort, parting ways with guitarist Emppu Vuorinen, as well as big hooks and the fun factor, among other things.

Dead Rhetoric: Feel the Burn is Brother Firetribe’s fifth album. What do you feel is most special about it?

Pekka Ansio Heino: It´s really special in a lot of ways. First of all we had a significant line up change as our original guitarist Emppu Vuorinen stepped down from the band and Roope Riihijärvi stepped in. That alone makes a change in how the band sounds like obviously. Second of all, we used a producer for the first time. Jimmy Westerlund did a great job and brought a lot to the table from writing to arranging and playing some cool guitar on the songs. The result is a really strong Brother Firetribe album with some new fresh twists in it.

Dead Rhetoric: What do you hope that people get out of Feel the Burn when they hear it?

Heino: Same as always, I hope it makes people feel good. Now more than ever as the world is in a such a weird and frightening state. There´s a demand for all kinds of music to give people a chance to put their minds into something else other than the daily bad news.

Dead Rhetoric: Were there any special lyrical or musical inspirations for Feel the Burn?

Heino: Musically we wanted to do something a bit different without losing one bit of our identity as a band. We were after some poppier elements rather than steering towards more heavier direction. That doesn´t mean the music lacks power, quite on the contrary. As far as the lyrics go, the main theme is centered in the constant battle between a man and a woman and everything that goes with it…but there´s other stuff there too, like “I Salute You,” which is a praise for anyone that´s gone through some heavy times, “Battleground” is about a guy getting out of prison and not being able to choose the right path. “Candle In The Window” could be a letter from a soldier out there somewhere missing somebody, depending on how the listener sees and hears it. Each lyric has room for a listener to draw a certain kind of picture.

Dead Rhetoric: How do you describe the way that Brother Firetribe has changed since the band started out?

Heino: I´d like to think we´ve grown into a tight bunch of professionals in terms of how we approach everything that we do as a band. That doesn´t take anything from still having a riot everytime we get together, we´re still having so much fun. I´d also like to think the music has gone forward.

Dead Rhetoric: Was it tough to part ways with guitarist Emppu Vuorinen? What does Roope Riihijärvi bring to Brother Firetribe?

Heino: Of course it was unfortunate and sad in a way but it was so clear and fair for everybody to make that decision and we´re grownups after all, so eventually it was painless. He´s still our brother and we wish him and Nightwish nothing but the best. Roope brings his youthful energy, his style and sound that´s very different from Emppu´s so the whole overall sound of the band is obviously different. He fits the band so well, personality-wise too.

Dead Rhetoric: The video for “Bring on the Rain” was done with drive-in movies in mind. What are your thoughts on the drive-in concerts that have been popping up due to COVID-19?

Heino: I guess it´s better than nothing! At least there are living and breathing people in the audience in flesh blood to perform to. Doing live streams online was cool and much needed for everybody during the lockdown but I can´t really say I totally enjoyed performing a full set to two mobile phones…It´s just that nothing beats the live concert experience, hope we´ll get back to the traditional ways of performing and seeing people eye to eye without restrictions at some point.

Dead Rhetoric: How important is nailing a big hook in Brother Firetribe’s music?

Heino: That´s what we´re always after, that´s what´s been our main aim since the day one. Simple as that.

Dead Rhetoric: Do you feel the sense of fun is just as important to the music?

Heino: It sure is, as far as I´m concerned. Rock and roll is supposed to be fun first and foremost, at least from my perspective. The way I see it is that after reading the daily bad news in the morning, the last thing I wanna do is put on music that makes you miserable. But that´s just me, I know how equally important it is to make angry and aggressive music that deals with the darker side of things.

Dead Rhetoric: With a lot of rock radio disappearing, what avenues do you think work best for a melodic rock band such as yourself in 2020?

Heino: That´s a good question…what works best for us is that we maintain our quality when it comes to writing and recording music and performing. That´s all we can do, and hope it attracts people enough for them to come see us play or maybe even buying our albums. Marketing-wise it would best to get a song on a movie or a game or something along those lines.

Dead Rhetoric: What excites you about melodic/AOR rock music today?

Heino: I´m still trying to find the quality stuff from back in the day by checking out certain musicians or producers but I´m pretty much off the wagon when it comes to what´s out there today.

Dead Rhetoric: What plans do you have for Brother Firetribe for the fall and into 2021?

Heino: Now that the Feel The Burn album is out, the next step is to become movie stars…We shot a short movie inspired by the music on the album, it should be ready within a month. Planning of possible tours or shows is pretty much pointless at this point as everything´s up in the air and everybody´s living day by day with the current situation. But we´re naturally dying to get out there as soon as possible.