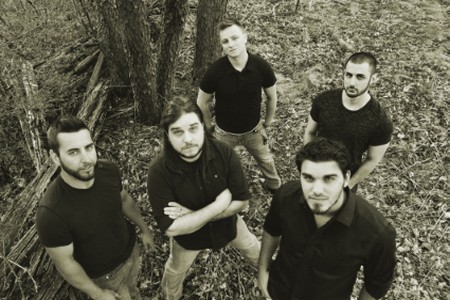 This site has covered its fair share of bands lately from our neighbors to the north Canada. Always gaining decent appeal in the major cities like Toronto and Montreal, you’ll find international labels now scooping up a lot of this homegrown talent and pushing their wares into the worldwide marketplace. Rising up the self-released ranks to AFM Records for their third full length Purgatory, Orangeville’s Borealis has since 2005 taken advantage of every opportunity to showcase their melodic/power metal style – versatile, heavy, and thoughtful, never forsaking the hooks necessary for building a career.

A concept record that tackles the impact of birth, death, and suicide on a family, Purgatory is as powerful musically as lyrically – the performances vibrant and stirring up a host of divergent emotions from first cut to last. Who better to discuss all things Borealis than with vocalist/guitarist Matt Marinelli – a man comfortable now in this dual role, still very excited to watch his band build their profile beyond Canadian borders.

In this conversation learn about the early ‘symphonic’ beginnings, how touring with Saxon seasoned their live outlook, and how even 12 year olds can change aspects of the man’s guitar playing – as well as giving us more insight into Borealis’ output.

Dead Rhetoric: Can you tell us a little bit about early childhood memories surrounding music and how you made the progression from fan to becoming a musician and discovering your passion for melodic, power/progressive metal?

Matt Marinelli: Of course. It started when I was really young, I was into Van Halen. That was pretty much the only band I really loved at the time. I didn’t want to play hockey, so my parents told me I should choose something else- so I chose to play the guitar. Ever since then I progressed- I had a phase where I was into punk music, but then my Dad came home and he showed me a band called Dokken. Instantly I fell in love, so I started looking into bands similar to them- and then every week he would bring back another CD for me. There was a compilation that had Gamma Ray, Kamelot, and Blind Guardian, all these bands- I was blown away because that’s exactly what I wanted, that 80’s metal sound progressing into something new. I would search all the time to find new bands- even to this day I do the same thing, because I love it so much.

I was 9 years old when I first started playing the guitar, I took the conservatory route in learning a lot of classical music and then from there I migrated into the metal.

Dead Rhetoric: When Borealis began in 2005, your initial output and performances contained a female opera singer. Describe to the readers the transitions that took place in terms of songwriting and style where you became the primary vocalist in addition to your guitar duties?

Marinelli: Especially here in Canada it was hard to find a singer, a male singer. There were a lot more female singers around, so we decided to do that European sound and we all loved Nightwish. We pursued that route and everything was fine, but with my interest with the genre I was into a little bit heavier of style. At one point, it wasn’t really working out with the female singer, she was into other things that we weren’t really about so we decided to kick her out. The only reason I started singing is because we had a show with Sonata Arctica, and we didn’t have a singer. I filled in for the show and we got such a good reaction I decided to stick with the vocals. As soon as I started singing we went into more of the sound that we initially wanted from the very start. If you listen to Fall from Grace and the Purgatory album, that’s the style we’ve always wanted to go into.

I think my bandmates were a little surprised, and possibly pissed, because they didn’t realize I could sing that way. You can hear improvement over the years, the first album my voice was not as strong as it is now. I think they are happy with me singing.

Dead Rhetoric: What was it like being able to open in your local part of Canada for Kamelot, Sonata Arctica, and Epica among others as an unsigned act? Did this help the band hone their craft and prepare for the recording of the debut album World of Silence?

Marinelli: It did, it definitely got our name out there. I definitely remember the Kamelot show, and Epica. That was the first really big show that we did, and it was surreal. Every time they would come to Canada we would go see their shows, so to play on the same stage as them was unreal for us. It really got our name out there in Toronto. Most of the bands that come into Toronto into that genre, you start seeing a lot of those same people so it started getting us into that power metal loop. It gave us a lot more confidence to write the World of Silence record.

Dead Rhetoric: At this point, how do you feel about your previous discography World of Silence and Fall from Grace? What do you consider the highlights and do you see any contrast/growth between these releases?

Marinelli: I do see growth in every release that we’ve done. The maturity of the songwriting has improved a little bit with every record, from World of Silence on through to Purgatory. World of Silence was good for what we could do in the moment, what we had at the time. If we were to re-do it we would probably change some things, but we are proud of every album that we’ve ever done. Purgatory for sure is the album that we’ve wanted to put out since the beginning, but we didn’t have the skill or the know how to do it. We are extremely proud of this one.

Dead Rhetoric: You made the leap from Lion Music to AFM Records for your third album Purgatory. How were you able to negotiate this deal, and how do you feel about the label’s promotion and roster?

Marinelli: AFM has been a label that I’ve been following for many years, just as a fan of the bands that they’ve had. When Fall from Grace was released we sent it to many different labels, at the time they weren’t interested. Then Timo (Hoffmann), the European promotion person, contacted me and said he really enjoyed the album, they weren’t looking for anyone at the time but if we had something new to make sure to send it to him. I held that word, we had a pretty long hiatus that I was hoping would not affect anything. As soon as we got a good enough demo finished I sent it to Timo and he was the first to listen to it. We talked every day to sort it out, they wanted to sign us and we are more than happy to be on their roster. The promotion is outstanding, better than I was even expecting coming from a new band. We don’t really know what goes on when it comes to promotion- especially in North America because with Lion Music it was mostly European promotion. This is the first time we are doing all this North American promotion and it’s awesome, because we are a North American band.

Dead Rhetoric: I appreciate the versatility in terms of the musical interplay, melodies, and attention to focused arrangements throughout Purgatory. Can you tell me a little bit more about tracks like “Past the Veil”, “My Peace”, and the moody “Rest My Child”?

Marinelli: Yeah, the album itself is a concept. Every song … it’s based on a little girl and her father. When you have a song like “Past the Veil” we wanted something that was going to hit you in the face in the beginning, with that song the whole concept comes up with the mother dies giving child birth to her daughter. With the whole intro with it flat lining and the baby crying, that is her giving birth to their first daughter and her sadly passing because of it. When we have songs like “Rest My Child”, it’s more from the view of the father who regrets what he’s done to his daughter, because he neglects his daughter and couldn’t forgive her for what had happened to his wife at the time. This is him apologizing to his daughter. “My Peace” is the single, and we find a perfect description of what the album is. It has many different elements, soft things, orchestration areas, progressive elements, and a standard, in your face heavy metal riff. That one is the saddest song we have written, that is the song when the girl decides to end her life. The poem or speech that the little girl reads in the song is actually her suicide note. 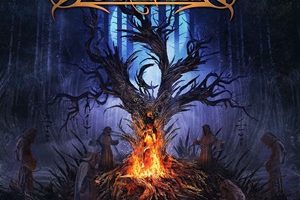 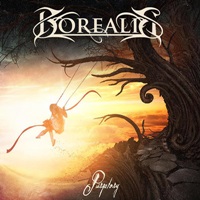