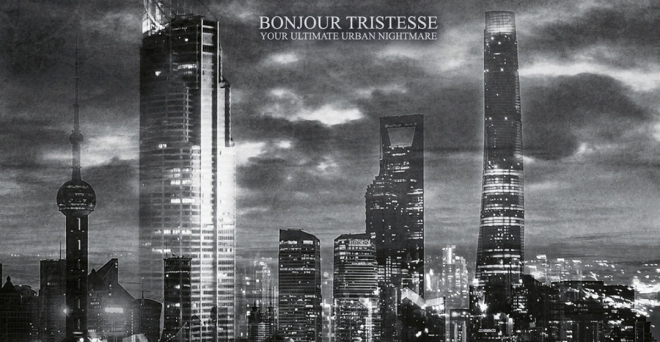 Quite the profound title: Your Ultimate Urban Nightmare, eh? It doesn’t mince words when pointing the finger at those responsible for the rapid destruction of our ecosystem and various animal species, something that can be attributed to a host of individuals and parties. Making environmental and worldly statements are nothing new in metal, but having it come from a black metal band, nay, a one-man black metal band, nay, again: a one-man straightedge black metal band, makes it all the more different. Bonjour Tristesse mainman Nathaneal (also of post-metal upstarts King Apathy) is something of an anomaly in his own scene thanks to these views, but more importantly, his creation of depressive black metal is something to behold on Your Ultimate Urban Nightmare where emotion runs the gamut from desperate to downcast to reflective. Such were the topics on hand when we had the man answer to our email queries:

Dead Rhetoric: You are also in King Apathy, which, obviously, is vastly different than Bonjour Tristesse. How do you go about prioritizing the two bands?

Nathaneal: There is no real prioritizing. I try to keep both bands going and whenever I think that it would be cool to have another album for one of the bands when I started writing material.

Dead Rhetoric: It has been seven years since your last full-length. Did you simply put BT on ice, or, did it take longer than anticipated to write new material?

Nathaneal: I didn’t work for seven years on this album. After the release of the first album, I was not sure if I wanted to write more music under the name Bonjour Tristesse. I’ve been very busy with my other bands – Heretoir and King Apathy. At one point I was so fed up with right-wing people in the black metal scene, that I even though not to continue the band. But in 2015, a German label contacted me and asked if they can do a re-release of the first album and I kind of liked the idea. I think many people appreciated the new versions of the old songs and from that moment on I started to write new material for the second album. At the moment I am not sure if there will be a third album, but I already have some ideas for new songs, so it is not unlikely that there will be a new album in the near future.

Dead Rhetoric: Being that King Apathy is already on Lifeforce, did it make signing with them the logical choice?

Nathaneal: Yes. I really enjoyed working together with Lifeforce Records in the past and so I asked Stefan if he would like to release the Bonjour Tristesse album. He liked what he heard and we decided to work together once again.

Dead Rhetoric: You are labeled as “anarchist black metal.” There are several layers to that tag, but, what does it mean to you?

Nathaneal: Black metal has always been an expression of being different for me. It is music from outsiders for outsiders. There is this element of freedom and this longing for a place in a world that seems to have none for you. Of course, not every black metal band has these elements, but those who have were always the interesting ones for me. Also, the emotional and nature influenced side of a lot of [U.S.] black metal bands like Alda, Panopticon or Wolves in the Throne Room resonates with what I like in black metal. As an anarchist, it is important for me to express my philosophical and political worldview through music. Writing songs and playing live has always been a good way to cope with all the bullshit that is going on in this society, where people and animals are turned into slaves and the environment is exploited and destroyed in such an extreme way.

Black metal can be very atmospheric and transports a lot of different emotions and feelings. The dark side of black metal seemed perfect for dark themes like depression, environmental destruction and a critique of modern humanity and capitalism in general. Being inspired by authors like John Zerzan it felt like the logical choice to label music which includes philosophies and even spoken word samples of anarchist authors and is made by an anarchist as “anarchist black metal.”

Dead Rhetoric: You list straight-edge as one of your interests on Facebook. Black metal isn’t often associated with that lifestyle – have you received any pushback?

Nathaneal: Of course. You always have some idiots who talk shit about stuff they barely know. The average metalhead likes to drink beer a lot. So, when you present extreme music that has a different message and even advocates a drug-free lifestyle you are almost certainly confronted with repulsion. Actually, I don’t care about these people, because they are just a few while the huge minority likes the music I make and messages supported within the songs. And maybe one or two people think about stuff like drug abuse or alcoholism and make a change in their lives.

Dead Rhetoric: Furthermore, the Your Ultimate Urban Nightmare title is profound and leaves an impression. Is it a statement against capitalism and greed? Or, something else altogether?

Nathaneal: The title is a statement against capitalism and against the modern way of life dominant in western industrialized systems. The whole album focuses somewhat on criticizing this urban way of life. The concept of the “city” is based on inequality and exploitation of the environment as well as human beings and animals. The first cities could only be built because mankind subdued the natural world through agriculture — which basically means, that humans decide which plant and animal species are allowed to live in certain areas. By doing this, mankind became the ruler of the natural world and stopped being a part of it. The surplus in food produced through agriculture leads to population growth which leads to the first cities.

Cities are pieces of land with too many humans to live off the land. So, you have to destroy the land around it to make it suitable for agriculture to produce enough food for the cities. This is a vicious circle, which ends in domestication, exploitation and a ruling class dominating poorer people. The concept of living in cities is morally and ethically wrong and so is our modern way of living, because it is destroying our planet and the communities of animals and humans living on it. Of course, you cannot change this established way of life, but I think it is nevertheless important to unveil the negative aspects of it. If you like to read more about this concept I can recommend the writings of John Zerzan and Derrick Jensen.

Dead Rhetoric: Black metal often looks inward versus outward. It seems like you are the latter. Are you more interested in exploring social concepts than personal?

Nathaneal: When I started making music and releasing the first songs, I was around 18-years-old. At that time, I preferred to look inward within my songs. You try to find your place in society, you make experiences, you learn what it means to be a human. Several years later I think that there are more important themes than heartache and trouble with your girlfriend. I still like to listen to music that looks inside and thematizes emotional struggles and I still write songs with these subjects, but all in all, I think it is more important to show people the world we live in and criticize all the negative things of the status quo. Every day more than 100 plant and animal species go extinct! And no one seems to give a fuck about this fact. That is making me sad and these are the problems that really matter. So, I switched from the inside to the outside.

Dead Rhetoric: The new album is both melodic and scathing – the right balance for depressive black metal. How do you view these songs in comparison with your previous works?

Nathaneal: I think the overall atmosphere of the first and the second album is very similar. Both albums feature very depressive and desolate music. The first album is more of a classic depressive black metal album, while the second one includes more influences from other genres and more of the driving black metal elements like blast beats, etc. Lyrically the first album features a critique of modern civilization and so does the second one. The second album uses more influences from genres like post-rock or 80s wave to create an intense atmosphere. I did not really plan this but it somewhat happened naturally. I listen to so many different styles of music and I like different aspects of so many different bands, that I simply have to include facets of their music into my songs. I think both albums are different but have also many similarities.

Dead Rhetoric: Being a one-man band can be tricky since it’s solely up to you. Do you have anyone to share ideas with?

Nathaneal: No, when I write songs and lyrics I do it on my own. I enjoy that way of writing music. I am free to do anything. I don’t have to discuss stuff with four or five other people, I can simply do it the way I want it.

Nathaneal: At the moment we are recording the next King Apathy album and we will start the recordings for the upcoming Heretoir album in a few weeks as well. We will also go on tour with Heretoir again and maybe – if I find the time – I will start to write the next Bonjour Tristesse album…we will see. 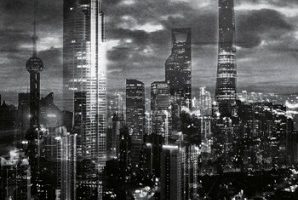