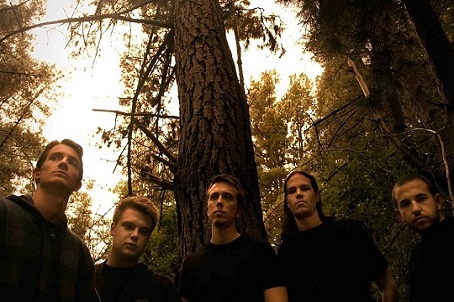 You’re probably not the only one scratching your head as to what a “Be’lakor” is. It’s rather unconventional, and this is coming from a scene that routinely gives births to bands who have swiped their names from Tolkien’s tomes or Dungeons and Dragons. In the case of this Australian five-piece, their name is taken from the RPG (Role-Playing Game) Warhammer Fantasy, where the character Be’lakor the Dark Master reigned supreme in the game’s vast table-top game landscape. We won’t go into vast detail about Warhammer Fantasy, but it’s along the lines of Dungeons and Dragons, where fantasy and mythical creatures rule the day. Try as you may to poke fun at such gaming, but the people who used to play such games are probably running our country at the moment…

To the topic at hand, Be’lakor’s intrepid brand of melodic death metal is spot-on over the course of their third album, Of Breath and Bone (Kolony Records). With a sound derived from prime-era Dark Tranquillity and various Finnish bands, Be’lakor’s striking use of melodies warrants deep inspection, especially songs like “Fraught” and “In Parting,” two of the finer melo-death compositions you’ll hear all year. The songs are expertly-crafted, creating vast mini-epics without letting things get out of hand. Such a two-fisted approach to this style is reminiscent to the Gothenburg glory days, well before pop and rock elements soiled the spectrum. Such a thing will probably never happen to Be’lakor, and keyboardist Steve Merry was more than uh, “merry” to give Blistering the lowdown…

Blistering.com: You’ve been fortunate in the sense that since your formation, your lineup has remained intact. How has the original lineup been able to stay together for so long?

Steve Merry: I’d say a big part of it has been the fact that we were friends before we were a band. This has meant that we’ve been able to work through any issues more easily

. We still hang out and do things outside of our band commitments and have a mutual interest in helping to keep things going smoothly and productively. It also helps that we still have fun and enjoy one another’s company.

Blistering.com: Describe both the working and personal relationship between the band members.

Merry: The working relationship has evolved over time, and these days we all have pretty clearly defined roles in the band in terms of who is to handle what. We’ve been able to see who is best suited, for example, to handling money issues, tour bookings, emails, song writing, and so on. We try to share

the load as much as possible. The personal relationships have remained quite strong for the reasons outlined above.

Blistering.com: You made some rather noticeable strides from The Frail Tide to A Stone’s Reach, but Of Breath and Bone is definitely your most mature album to date. When you were pulling the songs together, what was the general feeling amongst the band?

Merry: Thanks – we also feel that it is probably our most mature album with regard to the song writing. However, I must admit, during the writing phase we were at times unsure of ourselves. This is normal though – we feel this way whenever we write music, and probably moreso now that we are aware of the fact that people will be hoping for a strong album. We have a very systematic approach to writing our songs and bringing the riffs and ideas together as a band, so we were still confident that, just as in the past, we would be able to create something good in the end.

Blistering.com: How did you hook up with Jens Brogen for the mixing/mastering of the album?

Merry: We had decided some time ago that we would like to try having the album mixed and mastered by someone a little more removed from our usual circle, and also who had a strong grounding in the genre. Jens seemed a very logical choice, so we emailed him and worked out some arrangements. He was great to work with and needless to say we are really happy with the results of his efforts.

Merry: We like to look for images that capture our imagination. For this latest album (and also for Stone’s Reach), when we first saw the images, we found that we were drawn to them but also that they were a little bit unusual or different to what we might have been thinking of. Over the ensuing days and weeks we would find ourselves being more attracted to the image, moving from asking “Can we really use this?” to saying “This image has something about it.” Of course, it has also been important to us that the image chosen would reflect some of the moods or ideas on the album.

Blistering.com: The Be’lakor sound is rooted heavily in melody, so, is it safe to say that without any melody, there wouldn’t be a Be’lakor song?

Merry: Without a doubt. There are very few genres of music generally that could get away with creating a song that’s devoid of melody. Our music is completely based on having a range of interesting and hopefully moving or catchy melodies.

Blistering.com: Some will instantly peg your melodies as being derived from Gothenburg death metal, but I hear a little more Katatonia and Opeth than most. Is that a safe assumption?

Merry: Yeah, I feel that we have a wider range of influences than simply

Gothenburg metal. People who listen to our stuff will hear that we don’t limit the riffs to twin guitar harmonies following the same patterns. Lately our influences seem to have broadened even more, with some non-metal stuff adding to our pool of ideas at times.

Blistering.com: Tell me about “Fraught.” It’s definitely one of the year’s best melodic metal songs…I can’t get the melodies out of my head. Who is responsible for this number?

Merry: Thanks, I’m glad you’re digging that track. “Fraught” has riffs written by various band members. Three of us, at least, contributed riffs and sections to that song, with further changes and adjustments being made at the whole-band level once the basic structure was in place.

Blistering.com: What’s the relationship with Kolony Records like? It seems like they have a knack for finding some hidden gems in the underground. Any hopes of moving up to a bigger label?

Merry: They have been fantastic – very supportive, excellent communicators and hard working. I know that they are always looking for new, promising artists. We have discussed the idea of larger labels in the past, but it would depend entirely on the label, the situation, and so on. There is a lot to be said for being largely an independent band these days when you take into consideration the ways in which the industry has changed over the past ten years.

Blistering.com: Does the fact you’re based in Melbourne hurt your mobility in terms of doing more shows abroad?

Merry: It does limit our ability to tour, however the fact that we all work regular jobs and have family/personal commitments means that we are happy to only tour every now and then.

Blistering.com: Any specific goals for the band in terms of touring once Of Breath and Bone is released?

Merry: I suppose our main goal would simply be to continue creating music that we enjoy and to gradually build on our fan base.

Blistering.com: Have you grown tired of having to explain the meaning behind your name?

Merry: Yes, it’s probably fair to say that we have!

Merry: We’re very much looking forward to playing at a couple of festivals in Europe later this year (Summer Breeze fest in Germany and Brutal Assault fest in the Czech Republic). After that I’d imagine it’ll be straight back into song writing.