Behemoth’s Inferno On The Satanist: “Not Blasphemy At All” 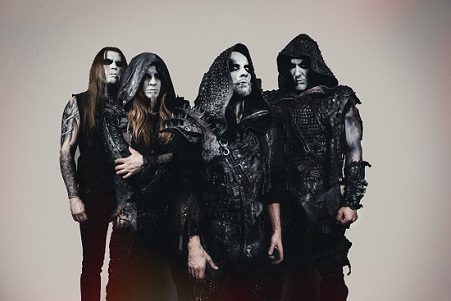 With Black Crown Initiate shaking the walls from the other side, Behemoth’s Zbigniew Robert “Inferno” Prominski and I sat down for a before-show interview at the Metal Alliance show in San Francisco, California. Before officially commencing the interview, Inferno informed me that his English isn’t quite as good as it used to be and that he’s not really used to doing a lot of interviews, but that is exactly what makes his responses interesting. As Inferno describes Behemoth’s music, it all comes straight from the heart.

Not so rusty with his English after all, Inferno discusses a couple of his favorite songs from The Satanist, discloses his latest work with Azarath, shares his views as musician, and expresses some of his perspectives on religion, the bible, freedom, and blasphemy. And for the record, Behemoth and The Satanist are not blasphemous at all.

Dead Rhetoric: So, to start out casual, this is the third show of the Metal Alliance tour. How has it been so far?

Inferno: Pretty good. The first show was all sold out. It has a great atmosphere and great to be liked.

Inferno: We never played in such a big venue before in San Francisco. We always played at Slim’s and places like that. It’s exciting to be here and play in a big hall with a lot of people.

Dead Rhetoric: How do you like sharing the stage with Goatwhore, Black Crown Initiate, 1349, and Inquisition?

Inferno: I think it’s a very good package. All the bands are great. My favorite is Inquisition; we played with them in the European tour. Goatwhore, we know each other, we’ve played and traveled together. 1349, they’re Norwegian, everyone knows that stuff.

Dead Rhetoric: You’ve been with Behemoth since 1997. How has the whole journey been as a musician with the band?

Inferno: We started to play a lot after the Zos Kia Cultus record. We used to play two hundred shows per year. We played even more with Demigod. We were on tour all the time and it was hard work. So, a lot of touring, but it pays off now.

Dead Rhetoric: So, the first record you recorded with Behemoth was Bewitching the Pomerania, followed by Pandemonic Incantations. How does playing with Behemoth now compare to when you first started with these records? Is it easier to go into the studio and on stage nowadays than it was back then?

Inferno: It is easier because now we know how to deal with the equipment and everything. We’re more mature now. What I can say about the music is that we can play more like how we want to. Some arrangements, we couldn’t use in the past because it could’ve been too much, but now we can do pretty much everything straight from our hearts. We are not part of any authority; we can mix some different styles, like a rock structure into some.

Dead Rhetoric: You’ve also done work with other projects like Azarath and Witchmaster. If you’ve even had time to work with these projects lately, is there anything new going on?

Inferno: Yeah. Azarath, no I haven’t lately. But Witchmaster, we recorded a new album and it’s going to be released by October of this year. It’s called Anti-Christus Ex Utero. And it sounds great. I don’t have the time to play live with them, but I do my best, you know how it is.

Dead Rhetoric: The Satanist has been regarded as one of Behemoth’s best works and has already been deemed as “album of the year” by many folks. What is your overall impression of this work? Are you as pleased with it as much as your fans seem to be?

Inferno: We never thought this record would be so successful. We made the music thinking, if it happens, if people like it, we can just be happy and do what we do.

Dead Rhetoric: “Furor Divinus” is one of my favorite songs from the record-

Inferno: Same for me! We’re going to play this one tonight.

Dead Rhetoric: I figured so! “Furor Divinus” really demonstrates your drumming skills. Word is that you’ve reached 270 bpm in the studio and 290 bpm playing live. Is it natural for you to play with such rapidity? Or do you find it difficult to keep up with yourself, so to speak?

Inferno: It is difficult. I try not to get wasted on tour, and no hard liquor any more, just beers. I try to warm up before every show for an hour at least. It’s a long set-list, so I gotta keep the beat up.

Dead Rhetoric: Do you have a favorite song you like to play from The Satanist? Besides “Furor Divinus,” that is.

Inferno: I like the title song [“The Satanist”] because there are lots of good parts, the song is very groovy, and the whole body is not just metal.

Dead Rhetoric: As a percussionist, what would you say to other percussionists and drummers aspiring to come even close to your skill-level?

Inferno: That is one of the most difficult questions. Play as much as you can, that is the most important thing, and be yourself.

Dead Rhetoric: Why did Behemoth choose The Satanist as the title for this last record and, regardless of what anyone else says, what does it mean to you?

Inferno: It means a lot to us. It says a lot about us as people and who we are and how strong we are, and we are stronger than ever. So, The Satanist speaks for itself.

Dead Rhetoric: Why do you suppose some people have difficulties discussing things like “Satan” while others are completely the opposite?

Inferno: I can say that when people start to think into certain things and refer to Satan, they’re usually more open-minded. With it, they can make progress with themselves, which is very good.

Dead Rhetoric: Just last February, Behemoth were found “not guilty” on the blasphemy charges, finally putting an end to that six year court battle. How do you feel about this?

Inferno: I feel nothing, I don’t care. We do what we do, and it is not blasphemy to us. It [the bible] was just a book. It’s a funny story, but very disturbing.

Dead Rhetoric: The Satanist is sometimes regarded as a “blasphemous” work, but if people actually read and analyzed the lyrics, they would see that it is biblically accurate in a lot of ways, if that’s what people want to dwell on. What do you think about that?

Inferno: It is not blasphemy at all [laughs].

Dead Rhetoric: Even though it’s multiple shows, many sweaty nights, and numerous broken drum sticks away from now, what do you plan on doing after this tour is over?

Inferno: Another tour. One short break, and then Russia, then the Summer Festivals, and home near the end of the year.

Dead Rhetoric: Is there anything you’d like to see or do while touring in America?

Dead Rhetoric: Do you think you will see it this time around?

Dead Rhetoric: Well, hopefully someday! Thank you very much, Inferno. Is there anything you would like to add?

Inferno: Thank you for the support, and enjoy the show. It was a pleasure.