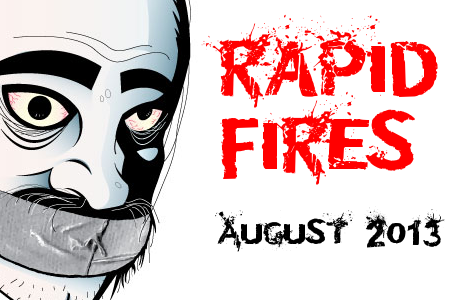 Behold the latest edition of Rapid Fires, our column where we take the surplus of reviews that were so kindly graced upon us and give them shorter, but no-less constructive feedback. Lots of variation in the bunch, ranging from instrumental black metal to the former frontwoman of Nightwish. Who would have thunk? Up this month: Agnes Vein, Anagnorisis, Bangladeafy, Cadaveria, Centuries, Fyrnask, Liar in Wait, Lucid Dreaming, Speedtrap, and Tarja. Read on!

Agnes Vein – Soulship (Venerate Industries)
Almost, but not quite the Greek answer to the preponderance of monolithic doom/sludge bands in North America, Agnes Vein display an obvious need to hang around the lower-end of the sonic spectrum, with riffs drenched in distortion and feedback on Soulship. While there’s occasional moments of over-indulgence (the 12-minute “To Know the God Within” comes to mind), Agnes Vein manage to work in depressive tones while the sludge and doom plough the terrain. Guess this is how the Greeks get down, eh? – David E. Gehlke (Agnes Vein on Bandcamp)

Anagnorisis – Beyond All Light (Self-Released)
Vocals, forever the weakest link in black metal. It’s why Ihsahn is so buried in the mix on Anthems from the Welkin At Dusk, or why so many people are turned off by so-called “black metallers” Cradle of Filth – Dani Filth won’t shut up. Unfortunately, the same conundrum has graced Louisville-based Anagnorisis. Conceptually and musically, they hit upon all the right spots – brazen melodies, furious blast sections, and atmospheric bouts that make trolling in the forest worth it. However, the preponderance of vocals at every gosh darn turn make the band’s Beyond All Light debut a task onto itself. Toned-down vocals: better black metal. – David E. Gehlke (Anagnorisis official site)

Bangladeafy – The Briefcase (Nefarious Industries)
Ah, nothing like some metallic fusion to break up the monotony of the album review cycle. New York’s Bangladeafy is a duo comprised of drummer Atif Haq and multi-instrumentalist Jon Ehlers, who according to the accompanying bio, was born with sensio-neural hearing loss. Roadblocks aside, the band’s The Briefcase album is a snappy, in-constant-motion stream of jazz-flavored metal, with heavy emphasis on Ehler’s funky bass work and Haq’s rather impressive drummer. Actually, it’s Haq that steals the show here – the man is capable of becoming the next Gil Sharone (Stolen Babies) or if we want to go that route, Tomas Haake of Meshuggah. Either way, The Briefcase is a jolt of the avant-garde, a persuasive, and ultimately fascinating listen. – David E. Gehlke (Bangladeafy on Facebook)

Cadaveria – Horror Metal – Undead Edition (Bakerteam)
Still better known in some circles as the rebound band from underrated Italian metallers Opera IX, Cadaveria have managed to carve out a nice little career of their own. There’s virtually no fanfare for the band over in these parts, but damn Ms Cadaveria and her miscreants for not trying. The “Undead” edition of their 2012 Horror Metal outing, two bonus remixes are tacked on the end, but it is the band’s melodic, hook-laden approach that gives the songs some teeth, specifically “Whispers of Sin” and “Apocalypse.” If only more female-fronted bands took this approach. – David E. Gehlke (Cadaveria official site)

Translated as “tired of life,” Taedium Vitae is the debut offering from Floridian whippersnappers Centuries. Hard to imagine a bunch of youngsters, living in Florida, playing this kind of jacked, frothy post-crust exists, but they do, and Centuries makes quick work of things via punk-riddled jams like “Egelidus” and “Grave Cordibus.” Naturally, it’s a visceral combination of Tragedy and any number of bands hanging out at Kurt Ballou’s studio, so there’s virtually no chance of this breaking from the norm. However, for a quick metallic shove-around, Taedium Vitae fits the bill…false angst or not. – David E. Gehlke (Centuries on Facebook)