Probably, no, definitely, the most exciting French black metal band in recent memory, Au Champ des Morts have crafted what might be the year’s most majestic album in Dans la joie. The band’s penchant for poignant melodies, breathtaking atmospheres and seismic song structures are simply unparalleled if we’re talking about albums from 2017, or even the last few years. It’s one of the few albums that reveals something new with every listen; a veritable “ear candy” album, if you will. For these reasons (and many more), we caught up with singer/guitarist Stéphane Bayle (formerly of French BM force Anorexia Nervosa) for a round of questions. Read on and learn something new…

Dead Rhetoric: Many of you have been a part of the French black metal scene for quite some time. When starting Au Champ des Morts, was it the intended purpose to create something entirely fresh and unique?

Stéphane Bayle: When joining together to build Au Champ des Morts, the only purpose was to make music, something visceral and personal. There was no particular plan of making it black metal, but it happened to sound this way in the end. As an example, first version of the song “Comtempler l’Abîme” sounded more cold wave-ish than even metal in its general acceptance. It became what it is now by playing it in the way we do all together. That’s our way to interpret the songs that make them black metal. And as medium to those songs, our playing is surely tainted with all our influences, from cold wave to black metal, including also old hard rock.

Dead Rhetoric: Au Champ des Morts translates to “In the Field of the Dead.” What does the name represent to you?

Bayle: As a translation we would prefer “to the field of dead ones.” It refers to a place in Auvergne called Glozel which is referred as the “Champ des Morts” where clay tablets, dated from Neolithic, with cuneiform symbols have been discovered, making it a cradle to human language and writing. It echoes with our interest in forgotten knowledge of humanity and hermetic doctrines. This name is also a metaphor about battlefields of the ancient times. There are many layers to explore under that name, that’s what we liked.

Dead Rhetoric: You talk about the “soil of Limousin and Auvergne.” What makes those areas of France so special, and, did they help shape the band’s sound?

Bayle: It’s special because those areas are where we were born, raised and where we live. It’s very important for us to be bound to our cultural roots. I don’t like the modern world, I don’t fit into it, and I reject its temporality, its nonsense. This soil has traditions, it has a connection with nature, time and life. For now, it’s not completely lost. And of course, it shapes our music and ourselves. It’s surely the basis of our whole concept, in a way, our sound came from this ground.

Dead Rhetoric: How did the deal with Debemor Morti come about?

Bayle: After recording what would become our EP Le Jour se Lève, we sent a few copies to our network to get a contract. We received many propositions and among them was Debemur Morti Productions. The label was our first choice anyway as they support many talented artists in the dark scene. But it was beyond our expectations: we met people with the same vision and sensitivity as ours. A relationship of trust has been quickly established, it’s a pleasure to work with this label and an honor to be part of this.

Dead Rhetoric: Dans la joie is simply a breathtaking debut. What was the goal when writing the songs for the album?

Bayle: As said before, the only goal was to deliver a sincere and spontaneous piece. Music and lyrics were written that way, we’re only the medium to make it come to life. But in the end, when all songs have been assembled for the album, we noticed that a whole concept about death emerged from this, with an idea of journey appearing behind it. Watching death grow from individual to the whole world, making foundations to collapse and finally reach “La Fin du Monde”. I think we had simply something to say, nothing was planned or calculated.

Dead Rhetoric: You have this knack for mournful, but beautiful melodies. I’d say they’re one of band’s trademarks. Do you agree?

Bayle: Yes, I think it’s an important part of our music. Sometimes, it seems that it came from nowhere, like if it had its own existence, and at the end it brings a touch of magic in music. That’s what we expect.

Dead Rhetoric: One of the keys to the album is that it has plenty of space and dynamics. It’s almost like a journey. Did you pay close attention to those things, or, did they come naturally?

Bayle: Both of them! When we started the band, we just say to ourselves that we’re going to use old Marshall amps and vintage pedals, to do music in an old fashion way, something spontaneous. It came naturally, because we try to let the songs breath, and most of the times it’s obvious to us that some moments need to be quieter, to let the tension raise like when you tell a story. This is what grabs your attention and makes you travel. It’s our way of feeling music. But after this phase, we have worked a lot on arrangements, for these atmospheres to be fully expressed.

Dead Rhetoric: Some of you came from Anorexia Nervosa, who had some success in the early ’00s before breaking up. What kind of things did you learn from being in that band?

Bayle: The main thing we learned from this era was to never compromise ourselves through music business. Anorexia Nervosa stopped because it had to, in order to stay sincere to its art. We’re gonna lead Au Champ des Morts in this way: no compromise, just art.

Dead Rhetoric: There is certainly a lot of focus on the French black metal scene these days. Do you think it’s justified, or, is it mostly hype?

Bayle: I think you’re better placed to answer that question. We’re a part of the French scene, and as French people, we have always put interest in it, so, I can’t really affirm anything. But from my point of view, since a few year, there are some bands that share common influences, and which are really pertinent, like Alcest, Year of No Light, Aluk Todolo or Throane.

Dead Rhetoric: Finally, what are you plans for 2017?

Bayle: Go back to composition and prepare what should be the band live. We are now evolving as a trio, so we don’t want to haste and wish to construct something worthy of the album for our performances. 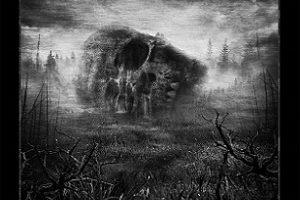