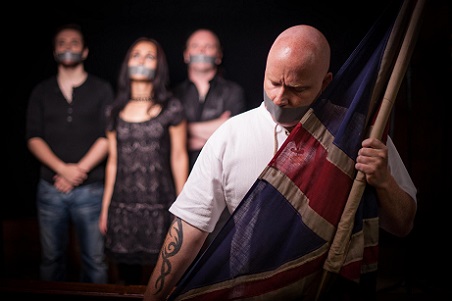 Once considered part-and-parcel with Anathema (hey, good company to be in), Britain’s Antimatter – or specifically Mick Moss – have jostled into their own sphere of minimalistic, sparse, dark rock. Based on the band’s two most recent forays: 2007’s Leaving Eden, and 2012’s Fear of a Unique Identity, they are one of the standard bearers for thought-provoking rock, an easy fit for the dark(er) metal brood, but invariably their own being, mainly the result of Moss and his superlative songcraft. No wasted notes, no fake emotion, and songs that stick like you wouldn’t believe (see: “Leaving Eden,” “Ghosts,” “Here Come the Men,” “Conspire” and “Monochrome.”)

The interview you’re about to read was conjured up in early 2013 for the still-new Fear of a Unique Identity, which was the band’s first album in five years, a body of work long in the making because of the in-depth Alternative Matter compilation. Real-life prevented Moss from responding to our queries for a good 11 months, but the patience lot DR is, especially for an outfit like Antimatter, who as Moss would go on to spiel below, is really just getting started after years of being associated with Anathema thanks to his partnership with Duncan Patterson, the man who helped steer the Brits into glorious atmospheric metal territory in the mid-90’s. But Moss has every right to lay claim to Antimatter as being a singularity entity; he’s earned it, and they’re certainly one of our “tree-branch” bands. Read on and learn something…

Dead Rhetoric: Your early albums fell largely into the electronic/ambient category, but with the last two (Leaving Eden and Fear of a Unique Identity), you’ve ventured into more minimal, and harder territory. Are you finding this direction to be more exciting? Is it easier to write songs in this vein?

Mick Moss: That direction was certainly exciting to the person I was at the time of writing this particular album. Whilst writing, I just keep heading towards music that creates a strong vibe in my stomach regardless of the category it falls into, and there’s also a kind of natural aversion to anything sounding too alike to the previous release, as that’s been done. What I find exciting will progress as I change and develop as a person, so there will be a constant flux in my musical output. The next album I’m sure will be different again.

Dead Rhetoric: Without Duncan in the mix, do you feel like there’s any direction you can go in? Not to say he was holding you back, but Antimatter is now, largely all you…

Moss: Yeah, sure, I can go wherever I want. When I worked with Duncan, I would provide half an album and he would provide the other half, so obviously I had no control over the sound or direction of the other 50% of our album. Now I have 100% control so I can release albums that are driven solely by myself, which is obviously much more appealing. In the past I doubt there would have been any concept albums with the two of us writing, as one would have had to get the other guy onto his concept and then go through some pretty awkward moments if the other guy was not quite getting the concept, or fucking the concept up with ideas that didn’t necessarily glue together.

So of course it took one of us to leave to give both of us complete conceptual freedom. By the end of 2003, I think Duncan was pretty much done with Antimatter and he was the first one to decide to go to pastures new. One of the byproducts of that move is that we then both got to make our own complete albums for the first time in our lives, Duncan with Ion’s Madre Protegenos and myself with Antimatter’s Leaving Eden.

Dead Rhetoric: How rewarding was assembling the Alternative Matter compilation? Did it give you a sense of reward for the work you’ve done over the years?

Moss: It’s a nice package, and I am really proud of the end product, though my memories of compiling it are of being tied to a retrospective release of monumental proportions, and the whole thing took longer than most studio albums I’ve been involved in. I had so many mediums with which I had to work within, music, film, photography, written word and then finally the layout of the premium photobook version. What can I say? In the end it was worth it but I sacrificed a lot in order to get there.

That project alone put an extra year in the space between Leaving Eden and Fear of a Unique Identity. That said, some of the reviews of the premium multimedia version of the album were stunning. A lot of people stated it was one of the best packages they have ever had the pleasure to review, which was such a compliment seeing as it was myself who put the whole thing together, not some major record label think-tank. So to have people comparing it to, or bettering, the premium package releases of many, many major acts was a great compliment to me, and also reassurance that I got together something really special for the fans.

Dead Rhetoric: As for the new album, how quickly did the songs come together?

Moss: There was quite some progressive thinking during the writing of the tracks and also whilst finding the arrangement and instrumental execution, so I doubt that many tracks were particularly easy, quick or painless to nail down. On Fear … there are a lot of musical styles all occupying the same disc. Dark folk, progressive rock, new-wave, electro, grunge, some stuff even sounded like club music to my ears… it’s all in there, and that gives great movement from one track to another. There was definitely a sense of random experimentation in a bid to find new soundscapes, anything goes, really, as I wasn’t working to any blueprint that I had to adhere to, and I certainly wasn’t terrified of straying from any ‘style’ for fear of losing fans of the previous album.

And with that in mind, I did see some blogs against  “Uniformed & Black” on its initial release under the misconception that it was an attempt to be ‘radio-friendly’, which I thought was quite a disappointing reaction. Ironically, I actually think it’s quite left-field and radical to come out of nowhere with a track like that, especially when there’s zero chance of getting any radio play (mainstream radio-play is part of a machine that Antimatter is not connected with. I’m well aware of this.). Far from being cynical, “Uniformed & Black” was actually an incredibly experimental piece that I had no idea where I was going with until it was finally finished, and its tight, melodic frame is something I’m quite proud of.

Dead Rhetoric: I’m especially taken by “Here Come the Men.” It’s a stark, but highly effective number. What’s your take on it?

Moss: The song is satire. It pokes fun. Many reviewers and fans have put forward that it is about homosexuality, which is a strange take on it. I would have thought that the concept is quite easy to see, but with that in mind I won’t explain it too much as of late I’m getting into the idea of letting lyrics embed themselves in the listener via the listeners own set of mental images. Originally it started life as a really heavy piece, based on a riff and really pounding drums, which was to represent the idea of machismo. But once I turned that approach on its head and rendered it as a gentle but menacing acoustic track, the soul of the message shone through a lot clearer than when it was an aggressive piece.