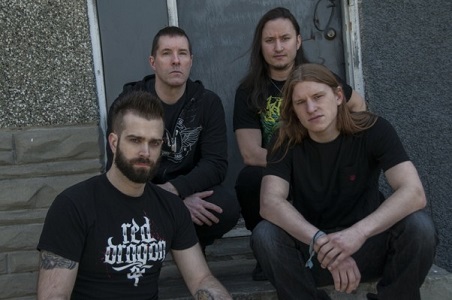 The second part of Matt Coe’s massive interview with Annihilator mainman Jeff Waters primarily touches upon the 90’s, a decade of turbulence for every thrash band not named “Metallica.” The always-candid Waters, as usual, pulls no punches…

Dead Rhetoric: How do you view Annihilator in the studio versus live performances? It seems like you’ve regained a lot of ground in Europe over recent years thanks to your road work and festival appearances…

Jeff Waters: We had about nine years over there where the sales went down for us, where you go from playing the big places down to playing the clubs, if you can deal with that, keep your ego in check, and you realize where you are at in the industry and reality check your life, you can become comfortable and be thankful to be doing even that. Then the upswing happened in 2007, everything good that happens there is awesome. Most bands get one surge and they are done, and that’s what we thought happened for us after the fourth album. When you get the second rush happen all these years later, and not because of a reunion tour or being dead for 10 years but more like slaving away all those years. We started playing bigger venues and getting bigger festival offers.

We progressed from playing small to medium festivals in the early afternoon to people just hung over waking up in their tents to all of a sudden playing dinner time at bigger festivals, then 8pm when the sun goes down and getting triple the money we used to, so now we can afford to stay in hotels and actually pay ourselves. We get to play to more people, get more interviews with the press- it happens gradually for us and we haven’t taken it for granted. Remember when I was saying it was almost a 10 year down time making it work? There is a short list of bands after that 1992/93 almost extinction of traditional thrash/ heavy metal where labels were cleaning out every band that had metal mentioned in their bios.

Other than the obvious Metallica who did their changing and transitions with their image and music, there is a short list that kept going. Of course we know about the Slayers and Motorheads and Priests and Maidens- those bands went from playing arenas to scaling down North American shows into theaters and clubs. Slayer has to be one of the bands that still carried the torch on- I saw them in a club in Vancouver in 1999 and I was amazed. When the times were tough they scaled things down big time and still kept the movement going. There is a group of medium size bands here that- and I understand in North America we aren’t included a lot of times in this group, because a lot of people didn’t know us. Overkill, Exodus, us, and Testament – we are all North American bands that all went through hard times, frequent lineup changes, struggling to pay all the bills, and those four bands are finally getting all the credit. With the internet, the resurgence of bands these past few years, we are playing to bigger crowds. We were not in the Big 4 so to speak, and I am proud to be in that list. The medium four if you will. The guys that didn’t quit for 10 years and reform because metal is back. We didn’t stop or take three-four years off to work normal jobs, we said this is our life and it makes it so much better when we meet up with Testament, say at a South American festival and Exodus.

Dead Rhetoric: As the 90’s wore on, the band started to do better in Europe, but remained idle in America. At that point, were you like, “Forget it!”?

Waters: Yes, I stopped looking in 1995 when I was trying to get a deal for King of the Kill. The Japanese and European labels were signing me to good deals, but I couldn’t get anyone in North America to respond to my faxes- that was the thing back then, and phone calls. Nobody wants us, reality check. I took it as a slam against me, the industry wouldn’t accept me. If I didn’t have Europe or Japan behind me I would probably be a bum on the street or dead right now (laughs). Music is my life, I didn’t want to change band names or music styles, I got lucky.

Dead Rhetoric: Do you believe you are at an advantage in terms of creativity because you are able to make a living through all of your music endeavors (songwriting, producing, and guitar clinics) beyond Annihilator versus artists who need to supplement their music pursuits with side jobs/ careers?

Waters: That’s what I do. I mix other bands records, I have my studio going, I write songs for other artists and publishing companies. I had to work my ass off for years to not lose money to keep Annihilator going. Now it turns out all these years later musicians have to multi-task if they want to have a career in music to survive with the difference in the industry. You have to do other things in music or not in music, unless you are selling hundreds of thousands of records you have to do other stuff on the side. If you have five guys in a band, you have a manager, you have a lawyer, you have an accounting, touring agents, artists taxes and withholding taxes- especially when you go to other countries where they take a big chunk.

If the managers are getting 15-30%, by the time everybody gets paid with lights, expenses, hotels, crew, and food- these 5 member bands are in the minus before they even get paid. Unless you are selling in Europe 1,000-2,000 tickets a night, how could you make money? Even if you were at the end of a huge two year tour, let’s say Arch Enemy or Lamb of God has done this huge tour, a lot of time they are supporting Metallica where you don’t get money. Let’s say you made $50,000 at the end of a two year tour because of merchandise sales, split that between five guys and its $5,000 a year. People who know the inside story, you have to do other side stuff to make a living. It’s an interesting industry and I am lucky that I can learn from a lot of musician friends and their mistakes, I make my own mistakes and learn from them, too.

Dead Rhetoric: What was the tipping point in terms of you shifting your focus away from North America? Was it Never, Neverland?

Waters: Roadrunner dropped everything that was metal. There were no bands left from that purge- Canadian or United States that had the word metal in it. You had Robb Flynn from Vio-lence turn into Machine Head, they didn’t start off with the thrash they have been playing recently – they had red jumpsuits on and changed their sound/image. Bands lost their record deals – nobody was in a position to carry on. Most bands just got jobs, some bands adapted and got rid of their name, changed out musicians and went on. For Machine Head that worked. We said, this is what we do. We had the luck of Europe and Japan staying with these styles and still buying our music.

My opinion would be much different if those two territories had not been there, I probably would have been quite bitter and depressed. We didn’t have an option in North America unless I wanted to change the name of the band and play a different form of music. Set the World On Fire didn’t do well in North America, but it was the second biggest album for us ever in Japan, and King of The Kill was the biggest one there, Set The World On Fire had us headlining to 80,000 people at the Dynamo Festival in Europe, so we were going up but North America didn’t see that. I didn’t have time to tour the world and try to break back in Canada and the United States. Playing this was not the kind of music the labels wanted to sign anyway, a traditional form of heavy metal and thrash metal. Fans may have wanted it, but the industry didn’t, the clubs didn’t, the booking agents didn’t.

They weren’t having it in 1993. I just decided I would vacation here and live in Canada, but do my hobby and living where people wanted me in Europe and Japan. My son is over 18, I can now tour wherever I want. With the internet it is awesome, the fans are finding us and wondering why we haven’t been releasing records in North America and touring there. They think I don’t like them, which is another misconception. If a label would sign me there, I would gladly tour, and now we got a deal through UDR Music/EMI so there are no excuses.

Dead Rhetoric: Dave has been the longest-tenured member of the band next to you. What makes him fit so well when other guys haven’t?

Waters: The other guys have, the thing I was telling you before is when one musician is writing and performing all the material, any other musician who wants to be in a band or to have a big chunk of input is going to hate being in this band, simply because it hasn’t been a band. I’m the driving force, if you want to use that cheesy term. When Dave joined, he was just another singer. It just ended up being that I didn’t think at all about getting another guy. Years went by, we were on our third album together, and this time I would ask him about a t-shirt design, what bands we wanted to bring on for support for the tour, what about this record label, publishing company, guitar equipment. I would ask him all these questions, after about five years I realized he wasn’t this hired or temporary guy, we became good friends and a partner in the band. The last three years we decided to not change drummers or keep the same bass player.